Since my first proper taste of owning a vintage sewing machine* I’ve been keen to get a few more to tinker with. There are a couple of specific models I am looking for so I keep my eye online for when one pops up in my area that I can hopefully afford.

Buying an old sewing machine off of TradeMe (the NZ equivalent of eBay) can be a bit of a gamble. The machines that sell cheaply (i.e. within my budget) often only sell low due to the seller having no clue about the machine at all. Either there is a very short description,  no machine name or code, suspect suggestions that it may work, or the worst photos in the world…sometimes all of the above.

I’ll give you an example: I spotted a cute little vintage machine for sale, the description by the seller was very short (“I think it goes?”) and they only uploaded two photos, both of which were of the back of the machine tightly wrapped in it’s cords and hiding most of the identifying markings. My interest was piqued however as it was a different looking beast from the usual vintage (i.e. often not “vintage” at all) machines that go up for such low prices. I was about to ask the seller for a front facing photo when I noticed someone else already had, “Can you please upload a photo of the front of this machine?” to which the seller had replied, “Sure, what is the front?”

The comment response was, “You pick it up and TURN IT AROUND”…Needless to say they never uploaded the photo and I let it go to someone else.

While trawling TradeMe on a bad TV night last week I spotted this groovy looking Singer 328P Style-O-Matic for $30, closing in 1 hour and, even though this model is not one of the ones I crave, for some reason I wanted her. So I threw on a bid with 5 minutes to spare and won with no competition. I think you will agree, for $30, from an obvious non-sewer, “it appears to function” (I am guessing they wiggled the handwheel a bit), this is what I mean by “a bit of gamble”!

On enquiry about pick up and payment I was instructed to leave the money in the letter box and the machine would be at the top of the stairs. The seller clearly had no desire for any face-to-face interaction. Later, after a different day was decided upon, she told me she would leave it in the back of the station wagon at the bottom of her driveway. I felt like I was going to a dead drop and I wondered what would happen if I showed up and it was stolen…in the end I showed up later than expected and the seller must have had to go out, for there was no station wagon to be seen. Instead I found the machine hidden under a tarp in the driveway with a handy and hastily made cardboard sign reading “sewing machine” on top!

Anyway, it certainly looked ok, so I left the cash and hefted it into my car.

When I got it home the first thing I did was give it a good clean – and then I explored the little cardboard box that came with it: 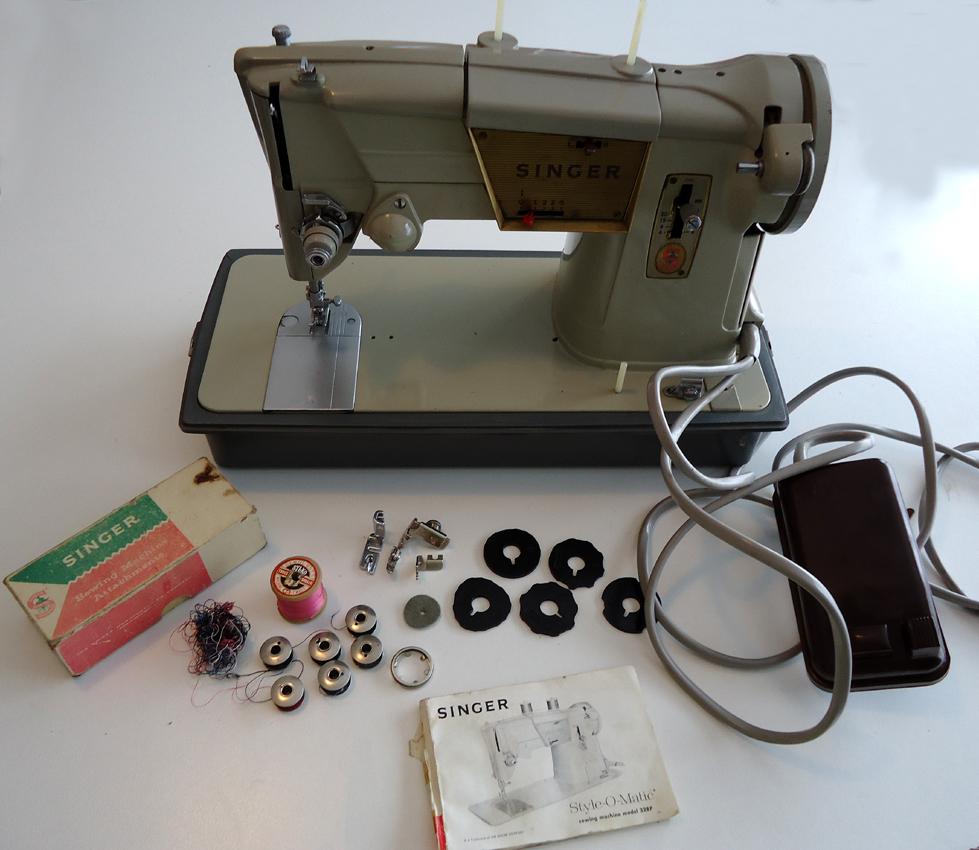 The advert stated “No extra feet” but I count three here (zipper, button & hemming), plus 6 “fashion discs” (one in the machine, I call them cams) and six bobbins. They also said the clips on the case were broken but they are not. With this much luck already I was doubting the machine would actually sew!

So I plugged her in and was rewarded with a glowing light bulb. I have never threaded a vintage machine before so I consulted the handily included instruction booklet and set to work. Winding the bobbin went smoothly enough and then I began to thread.

I put the bobbin in first, top loading, another first of me, but it went in ok. The bobbin assembly was a bit wobbly and it looked like the tension screw was mostly undone…a sign someone had been fiddling with it? I’d come back to that after I tested the rest…

When I got to the needle thread tension dual I was a bit confused about where to run the thread, the diagram is very general, turning the tension knob felt…not right…and there also didn’t seem to be any markings relating to the tension numbers.

Are you kidding me? There are three discs behind that knob to choose from!

Sigh! So I consulted the older 201 and sure enough there was a -|+ marking above the tension numbers. A closer look at 328 and I found the -|+ marking upside down, someone had definitely been fiddling…not a good sign…so, with nothing to lose (really) and secure in the knowledge that after I stuff it up completely the Internet would tell me how to make it right again, I promptly disassembled it.

Then I started the reassemble, not that tricky really, I used the 201 as a guide, they are very similar.

So I didn’t need the Internet in the end, I worked it out by myself which is much more satisfying isn’t it?

Another squinty look at the threading instructions and I worked that bit out too…A new needle and she was ready to go!

I might have panicked just a little bit. After some thinking I revisited the bobbin case and, following the instruction book, I tightened up that screw, testing and tightening some more until…

Then it was time to play with the cams:

I stitched up a little swatch for future reference:

She can do a lot of modern sewing functions that I didn’t expect too: Button holes, left-centre-right needle position, and she can even run two needles!

Phew! A gamble that paid off. This little retro cutie is hard-working and very tough, she is a bit different to all the black curvy Singers out there and has her own distinct personality. I’m glad I took the risk and picked her up.

I can easily see myself building a small collection of vintage machines, I’d love to learn more about how they work and a tiny bit of restoration. I have always enjoyed pulling things apart and learning how they work, which is a good thing, because I’m going to impose a fairly strict rule on myself, that they must function, or at least be DIY repairable, and I really shouldn’t buy a new one until I get the last one going, or at least the correct parts on order. 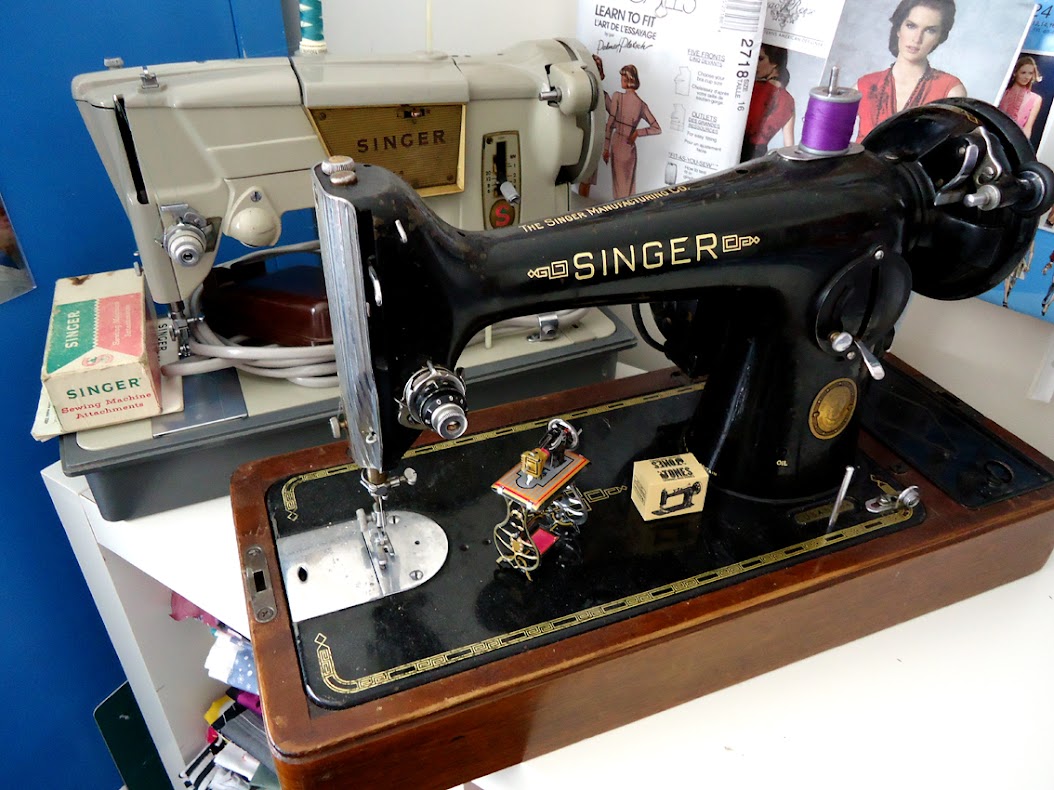 The Internet did come in handy for teaching me that the Singer 328P was produced out of the Penrith factory in NSW, Australia, that is what the P denotes. They began production in 1959 assembling 201P machines and later added the 227P and the 328P to the line. The grey plastic base was made locally and is specific to the Australian (and therefore NZ) market.

I was hoping for a more specific manufacture date but when I finally located the serial number the Singer website merely gave me a bracket of 10 years, 1957 – 1967. ISMACS suggested a smaller range for the K (Kilbowie factory) model of 1963-1965…hmmm…I know it was after 1959 and my serial number is early VA series so I could guess it could be around 1963 as well…Who knows?!

For future reference, if you are struggling to find the serial number on a 328 or similar, here is where I found mine, you can’t even see it in the picture, but trust me, it’s there:

I’ve given here a nick name already too, The Tractor, said with absolute affection, here is why**:

Mechanic Husband commented that “it sounds like she has a diesel knock!”

**I was still playing with the tensions when I made this video, that’s why it looks like I am pulling on the fabric, because I am! Also, she does sew at a constant speed, not in this video because a short cord meant I have the foot pedal up on the table and I was driving it with my right hand, which is tricky.