Here are a couple of terrible dirty mirror selfies. It was dark, Winter is sneaking in here. We just came off of Daylight Savings which is helping in the mornings but a shock it the system to arrive home from work and realise it’s suddenly dark. 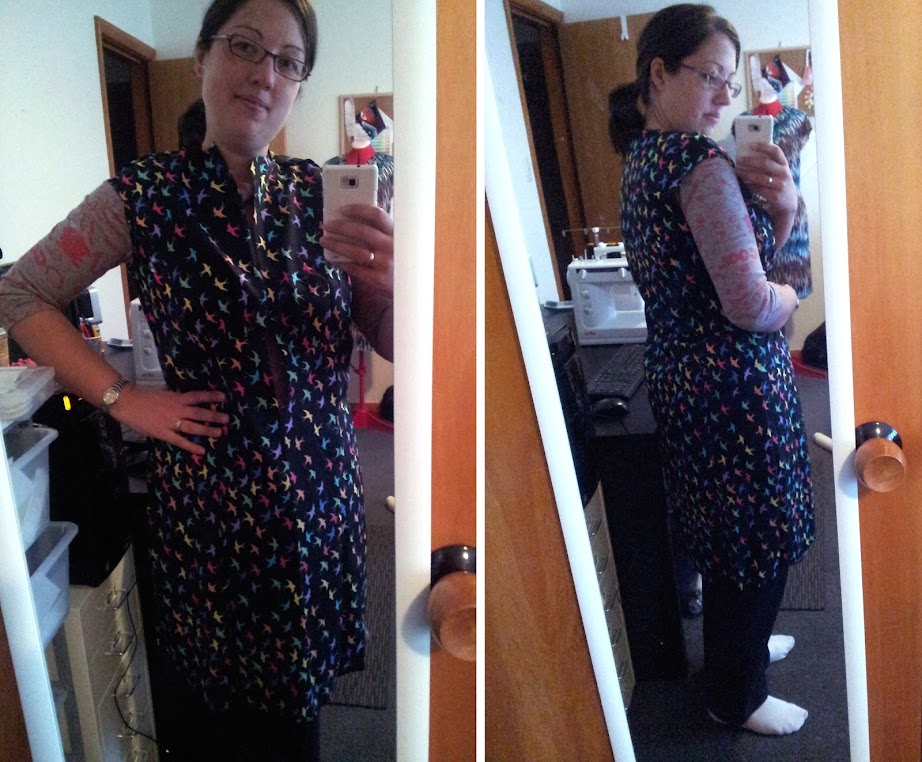 This is the rainbow swallow dress, body mostly assembled and requiring some serious fitting. It’s not looking particularly flattering over track pants and a top but I can see the potential cuteness 😉 It is one size (maybe one and a half) too big but there are lots of seams there for taking in.

On Sunday I did a little bit of sewing with the Wellington Fabric Hoarders. Johanna came too and it was a lot of fun until some weird power spike blew the bulb of her machine out! Just the glass, it kindly left the metal case part behind inside the machine. It was a bit scary, at first we through it had exploded on it’s own until someone asked, “Has anyone else’s machine stopped working?”  and that’s when we realised that the power was out along the whole wall. Poor Johanna and her super cute vintage Bernina, the bulb was a gonner so we switched to tracing and gossiping until home time.

I was a clever girl and managed to leave both my sewing machine foot controllers behind but luckily Emma took them home with her. After I picked them up on Monday I plugged my machines in to check them, a little nervous after the power spike. Both are fine, although my Elna’s bulb was also blown, less spectacularly that Johanna’s, mine is still intact, just a bit black inside.

In my sewing room (and in fact through our entire house) I use a spike-protected power board. It contains a small fuse that pops out or (on the cheaper versions) blows first if there is a power spike, cutting power to whatever is plugged in and protecting those electrical items from getting blown up. I always take a double plug and power lead when I sew elsewhere but have never considered power spikes so next on my sewing shopping list, to add to my mobile kit, is one of these:

Call me paranoid but they are pretty cheap and while both my machines are quite basic and mechanical and I am not sure how much is inside that can actually explode (besides the light bulbs) it’s better to be safe than sorry. If you often take your machines elsewhere for sewing and especially if you have a fancy pants computerised machine, perhaps it would be a good investment for you too, just sayin’ …