I know I’ve dropped a couple of grumbly winter comments in the last few posts but I don’t really mind winter.

I remember when we announced we were returning back to Wellington from Perth (the sunniest capital city in the world) everyone kept saying, “but it’s so cold there!”…yeah it’s not really.

Here in Wellington we have our fair share of amazing summer days and because we do know how cold (and windy!) winter can get (looking outside my window right now and shivering just thinking about going out for my next meeting) it means that when the sun is out us Wellingtonians (and Kiwis in general) know to get outside and make the most of it.

Also, who doesn’t love that the amazing ski fields are only a short (and beautiful) drive away?! Or if the weather people are right I might even be skiing in my back yard tomorrow!!

My only proper grumble with winter is the loss of light. I feel like it’s always dark. I know it isn’t really but as we slog towards the shortest day this month it’s dark when I leave for work and it’s dark when I get home again. I can’t remember what my garden looks like or even what colour my house is painted.

Ok, it’s not really that bad, but it can get you gloomy if you let it.

Until I address the lighting in my sewing room stitching dark items is pretty much impossible in the evenings. Instead I tend to watch TV after dinner – can you believe I have only just learnt about this thing called Game of Thrones? Don’t be a hater, I had to watch something while waiting for the new seasons of Falling Skies and Warehouse 13 to start! 😉

Is my nerdyness showing? Good, because it will all make sense later on in this post

So while on the couch in the lounge I have re-discovered an old craft that I used to really enjoy when I was younger.

It’s cross stitch and since we are being so honest I can tell you that I also used to be a bit embarrassed about it.

I guess I thought that “proper” embroiderers must think cross stitch is the paint-by-numbers joke of the needlework world. You follow a chart, fill in the symbols and it’s not really that hard, even the fabric has the holes already in it but you know what, even if people do think that I don’t care because I enjoy the speed at which a cross stitch project develops and have you seen and the nerdy patterns you can get now?!

I was first introduced to cross stitch at Brownies. I am assuming Brownies is an international concept but I could be wrong. “Back in my day” Brownies was a fun girls only group where I got to meet other young girls my age (7-10 years I think) and learn some good morals and crafts and do lots of fun group activities. My younger sister started as a Pippin and after Brownies you move up to Girl Guides.

Anyway, at Brownies one of the leaders gave out those little beginner sampler kits that comes with a chart, the right sized bit of aida, a needle and thread. She taught us how to do the stitching and we all made up our kits under her guidance. Mine was a turtle and guess what, I still have it! 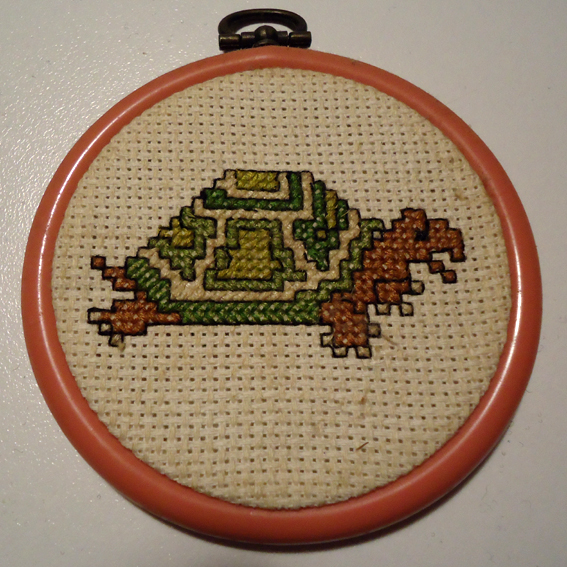 My mum chose the frame for me and I was super proud of it and immediately hooked. I made a few more of this style of kit and also moved on to larger charts where you bought the notions yourself but nothing much bigger than maybe 15cm across. 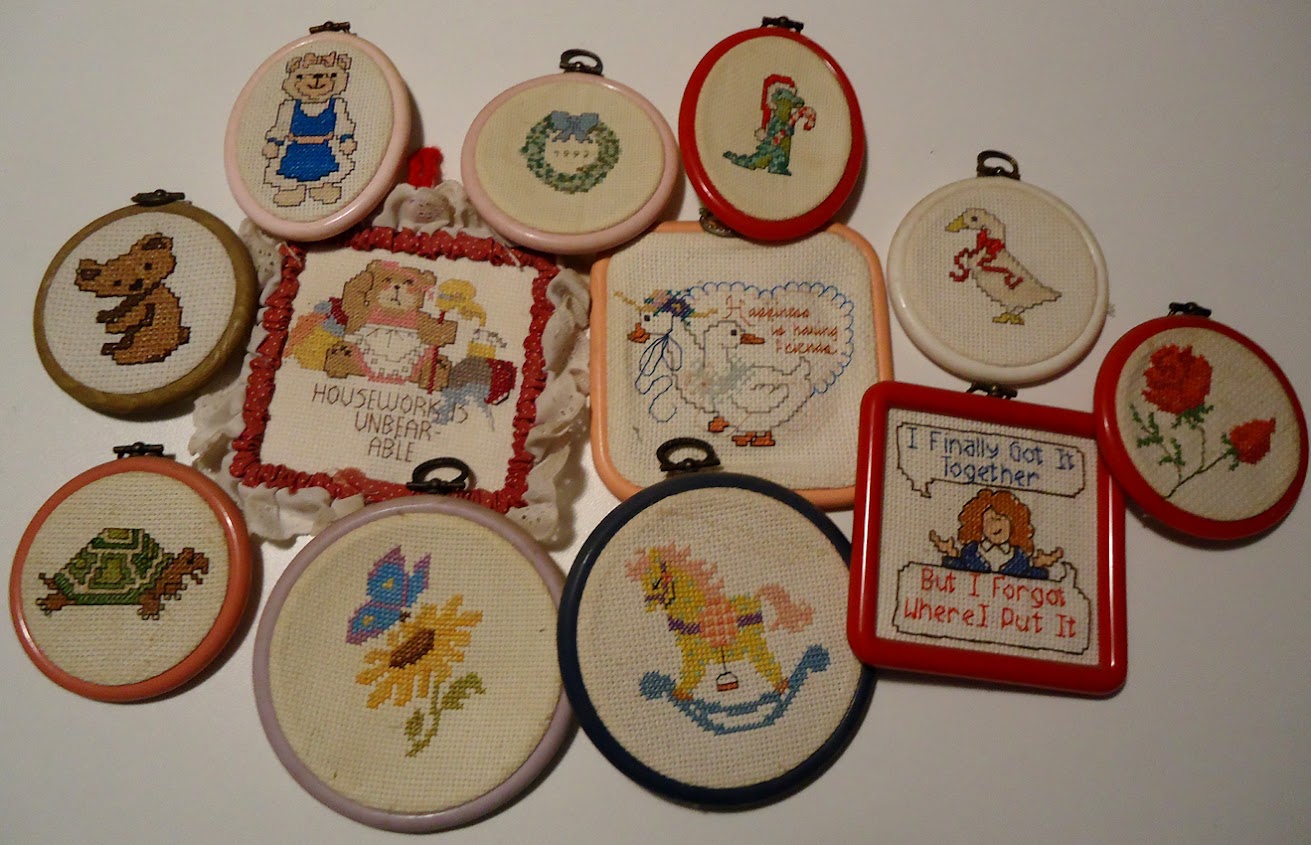 It’s all a bit cutesy huh?

When I moved up to Girl Guides I wanted to earn my needlework badge (or whatever it was called) so I brought my large collection in to show one of the leaders who was very much into her needlework. She promptly turned them all upside down and told me the backs of my works were too messy and that I should work harder at tidying them up. She lectured me that the backs of each work were just as important as the front and that I should bring in the next item I made and if that had more clean back then I would get my badge. 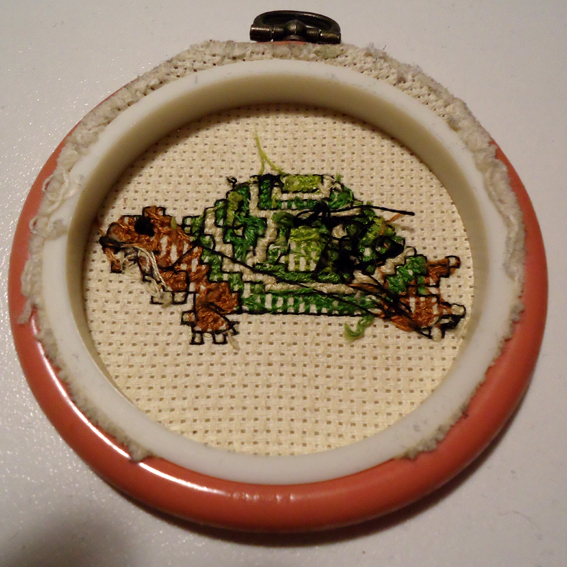 Now I know she was probably just trying to be helpful and maybe my childhood memory betrays me but it seemed like quite a harsh critique to place on a young girl and I was crushed.

I don’t think I ever got that badge since I stopped being a Guide soon after (not because of that experience) and it didn’t stop me cross stitching, I even got into designing my own charts but at some stage I did stop and forgot all about it.

Well, enter the amazing enablers that disguise themselves as the WSBN! If it isn’t fabric or pattern sales it’s ALL THE OTHER CRAFTS! Haha, love you girls!

So, back to the couch, and over the last few weeks this is what I have just finished: 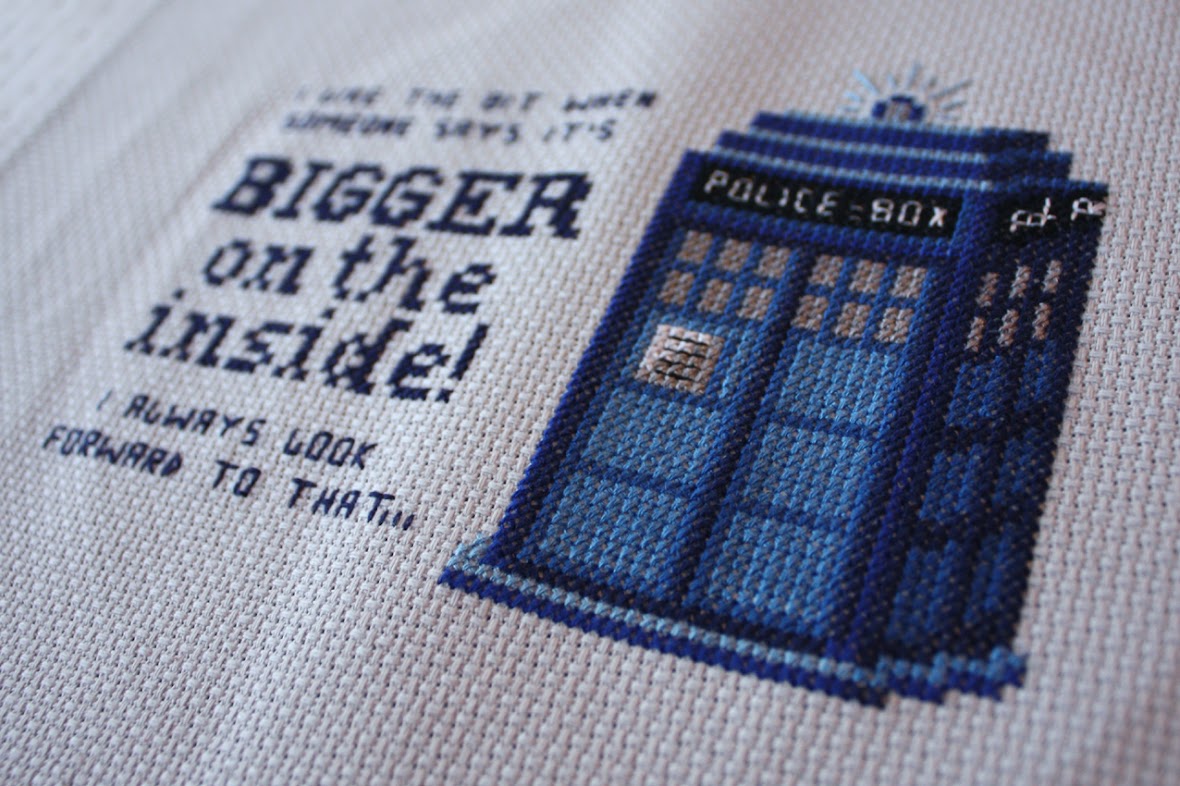 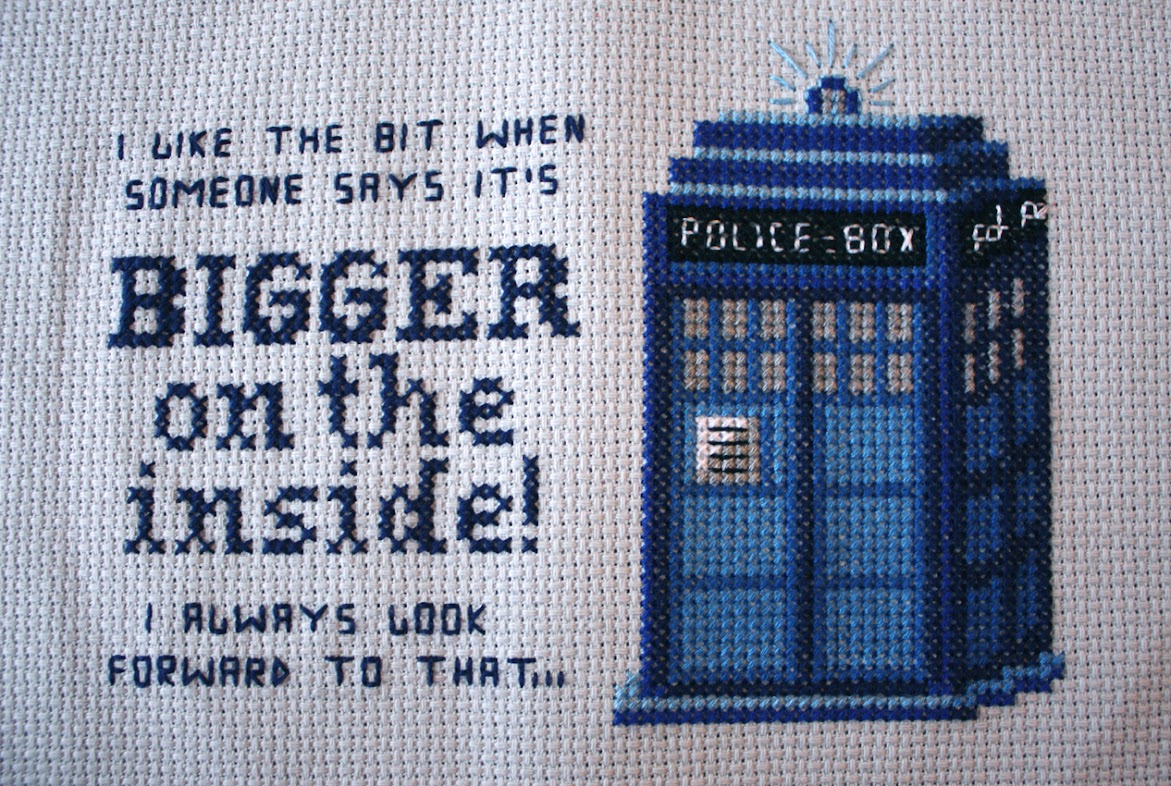 It doesn’t really come across in the photos but the aida is a light blue, a gift from Holly at one of our WSBN Mega Stash Swaps and that was all I needed to get me started again.

Now I guess I better show you the back too, which has improved considerably but then I am older and more appreciative of these things, nimble fingers etc… 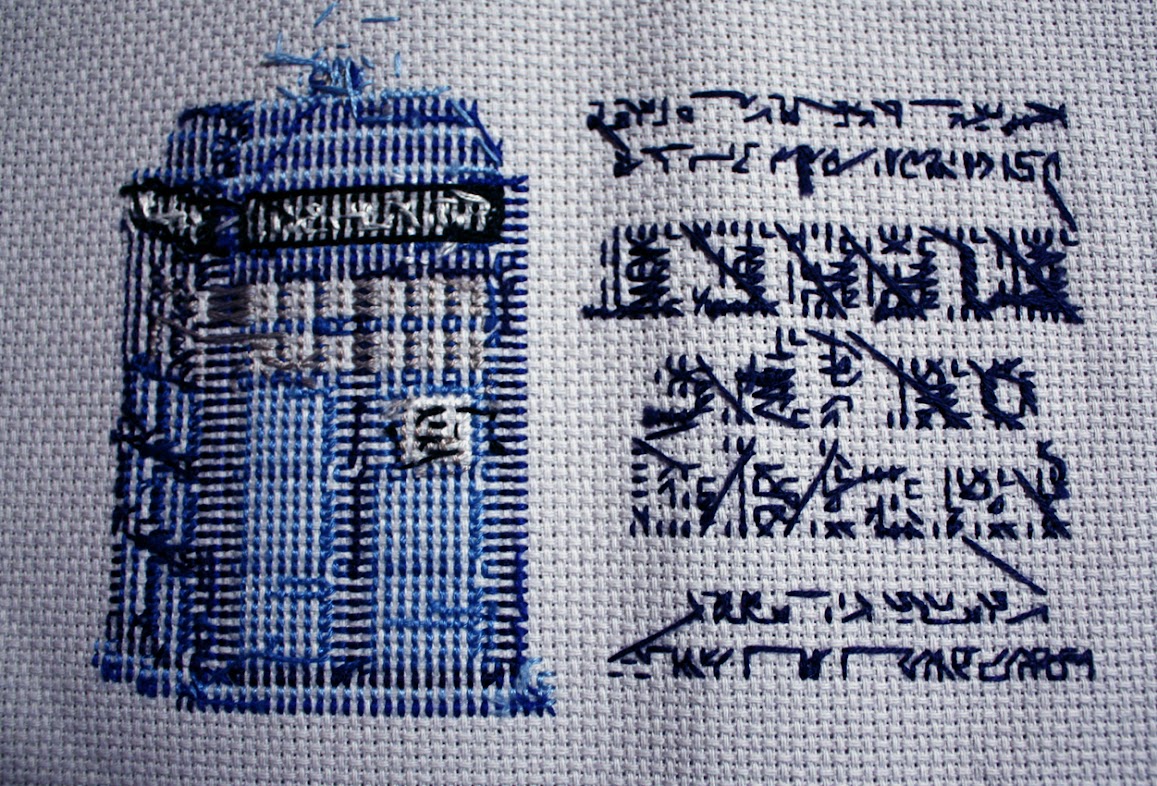 This pattern is by Nerdstitcher but I used designers-discretion and changed the thread colours, utilising some from my re-discovered stash and also I left off a lot of the back stitching. I feel like it maybe needs a bit of a boarder, what do you think? And then obviously it must be framed and hung up somewhere 🙂

I’ve already started my next cross stitch project, it’s along the same nerdy lines but different franchise, if that’s the right word… 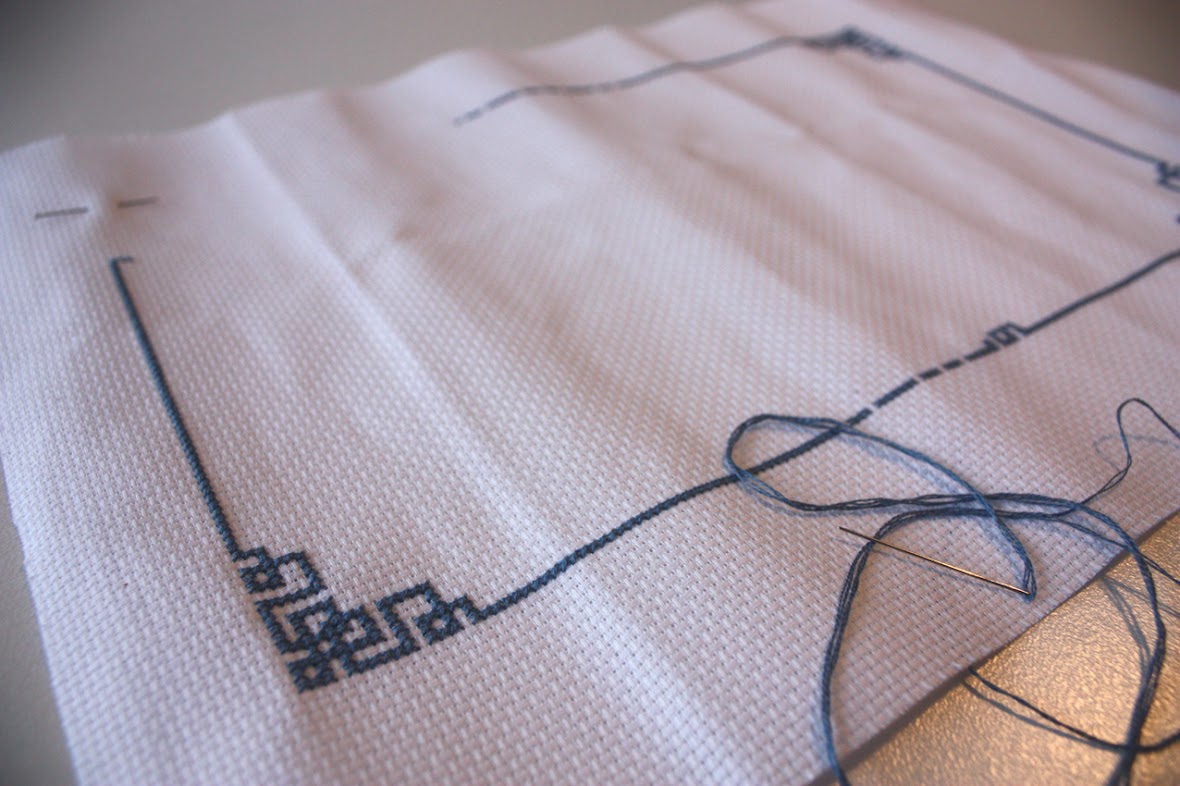 Haha, not much of a clue huh? But this is what made me think my TARDIS needed a boarder, something kitschy-country perhaps?

As Sir JK says, “I am an active relaxer”, my brain or body needs to be busy to unwind, so in the evenings, when I can’t sew, I am glad I can pick up my cross stitch…well, after Harri falls asleep on my lap I can…otherwise it becomes a tug of war!

Anywho, Creatives tend to hoard crafts much like fabric and patterns so what other crafts are in your creative collection?

Do you cross stitch, or did you used to? How about knitting or crochet? I know lots of you do that.

Do you have to swap up your crafts when the seasons change? I couldn’t bear the thought of knitting at the height of summer!

41 thoughts on “Hoarding ALL the crafts”