Have you guys seen Papercut’s new Constellation collection yet?

Katie has just released 6 new patterns each with their own variations, and they are now sized from XXS to XL.

I have plans for this blouse, they include the use of a sheer with solid collar/cuffs/yoke and some extra darts because that’s how I like my fit.

The Saiph tunic isn’t really me, but I still love it. I can see my sister wearing it and I want to see someone make variation 1 in two-tone, maybe white with a black skirt?

It’s hard to pick between the two jackets, they are both my favourites. I haven’t seen a bomber sewing pattern yet (or at least not one that has caught my attention) – I love the geometric detail at the sleeve head, you could have a lot of fun with that!

And last up is the Bellatrix blazer, classic with a twist, and guess what? I made one! Wanna see? 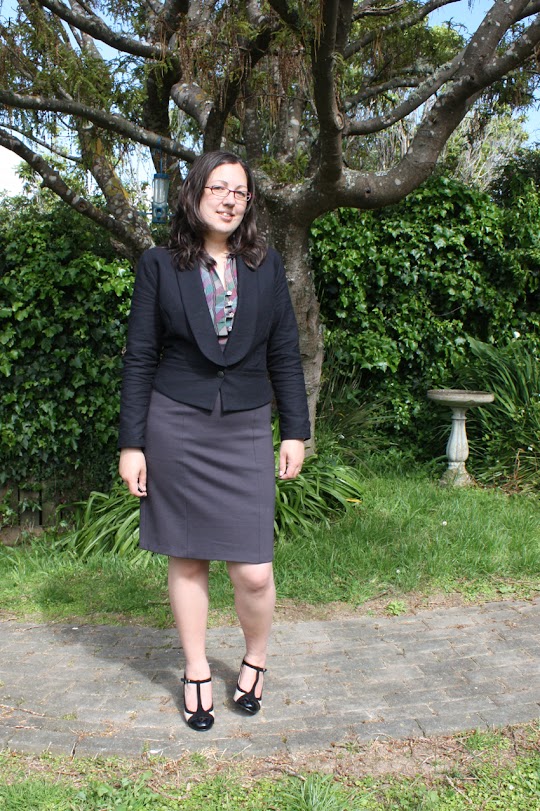 I was overloaded with ideas for this blazer but I decided to go with my initial gut feel and keep my first version classic and versatile. For the shell I used a piece from my stash that I bought way back in 2010 from the Empire Rose sale. 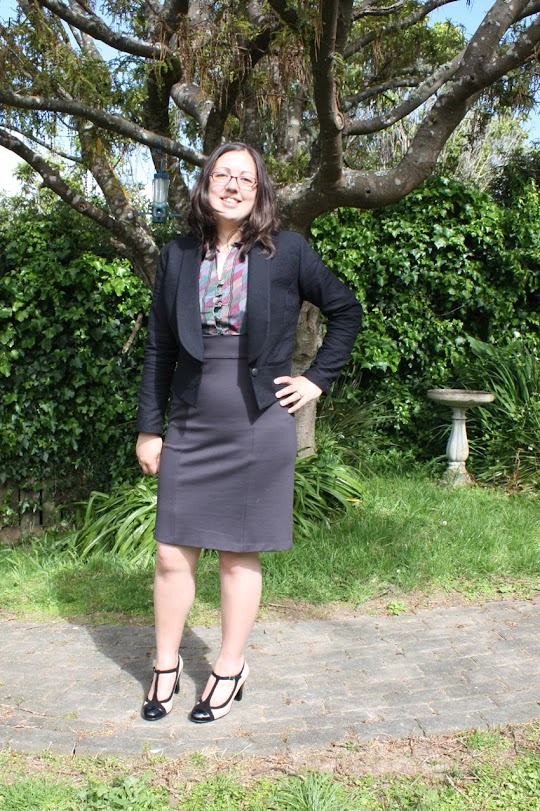 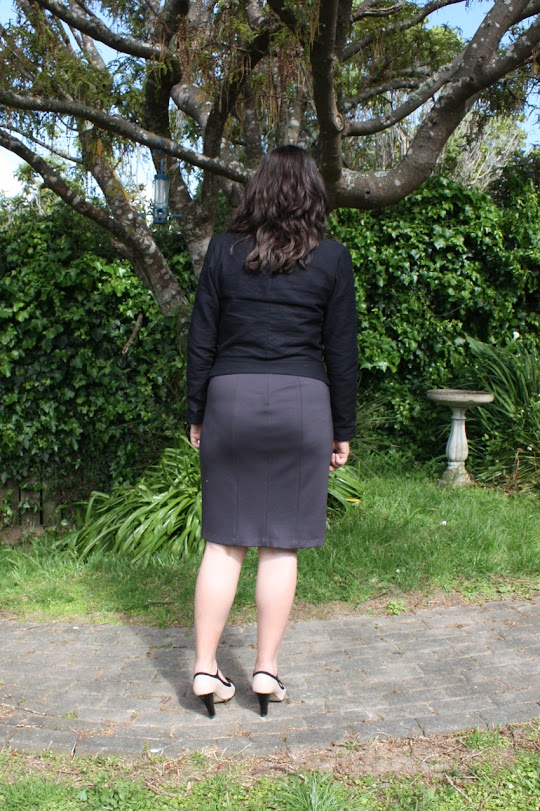 I labelled it as cotton but I suspect it’s actually more linen. It’s a really dark blue, almost black, but it gets better! It has a subtle pinstripe through it that is actually metal filaments so it has this awesome sparkle in the sunlight. It’s a nice twist on classic but I also think it’s the perfect fabric for a star themed blazer. This piece has been biding it’s time in my stash for a while – because the stripes are real metal it needed to be made into something lined, on a cut edge those little buggers are sharp! 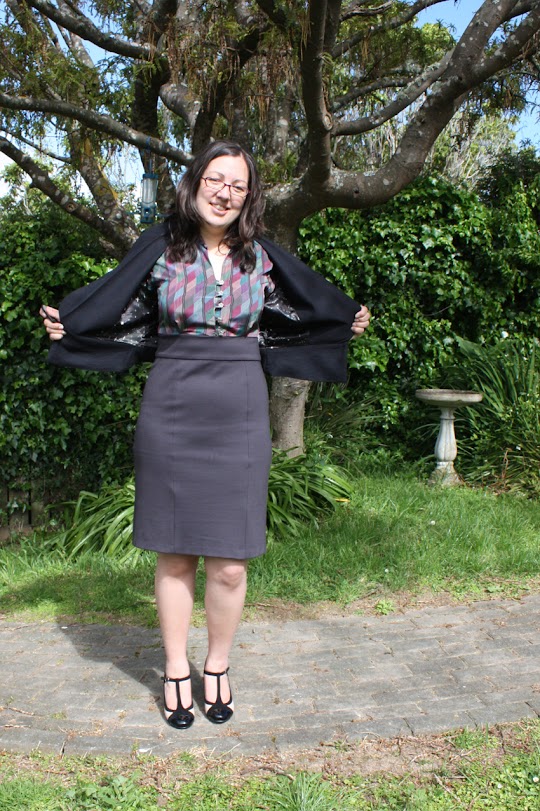 For the lining I had this vision of an amazing galaxy fabric. There was no time for trawling on Spoonflower and I didn’t expect to find any at my local fabric shops but then the first store I walked into I found some within 5 minutes. I was so excited I actually skipped to the cutting counter and I didn’t care what anyone thought! 😉
If I make a jacket that is neutral in colour I can’t help but stick in a super bright lining. Instead this time I made my pocket bags from a colourful silk remnant so at least I had some colour hidden somewhere.
. 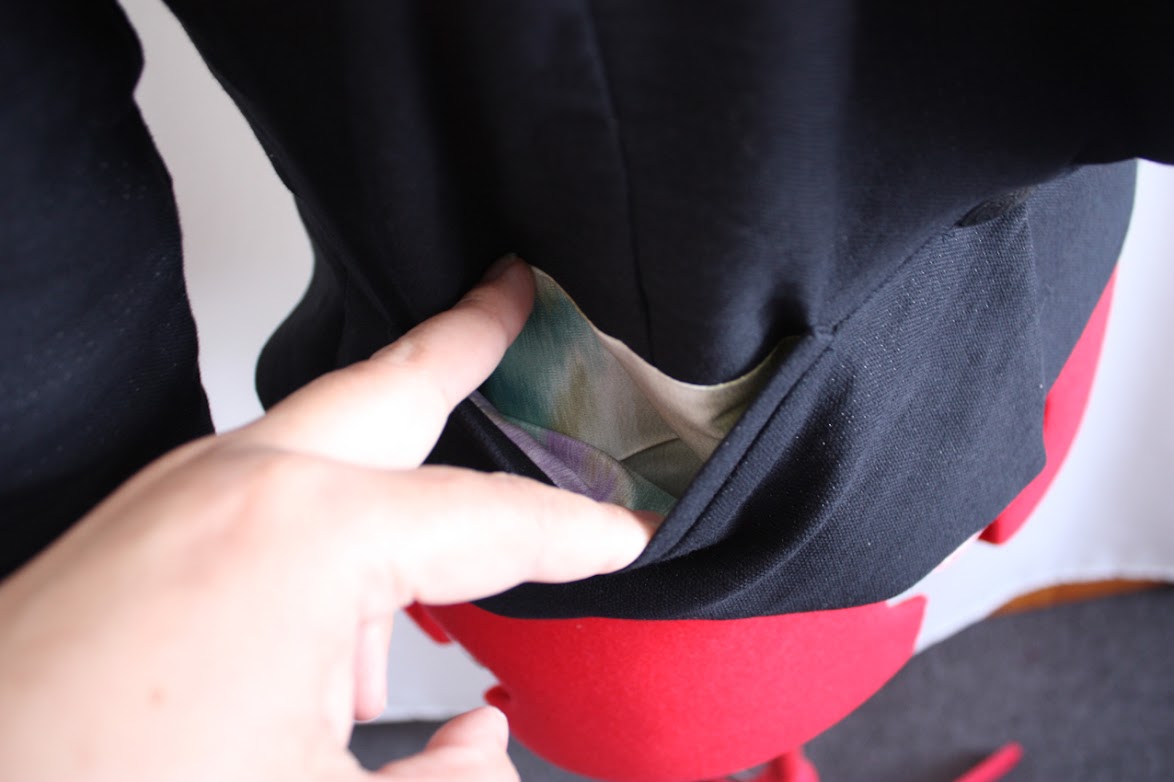 In my little sewing world I like to experiment and if I am making it myself I tend to be more brave. My usual style would have seen me sew up variation 1 – I prefer my tops and jackets long – but I loved the angles more on var. 2 so I went with that.
. 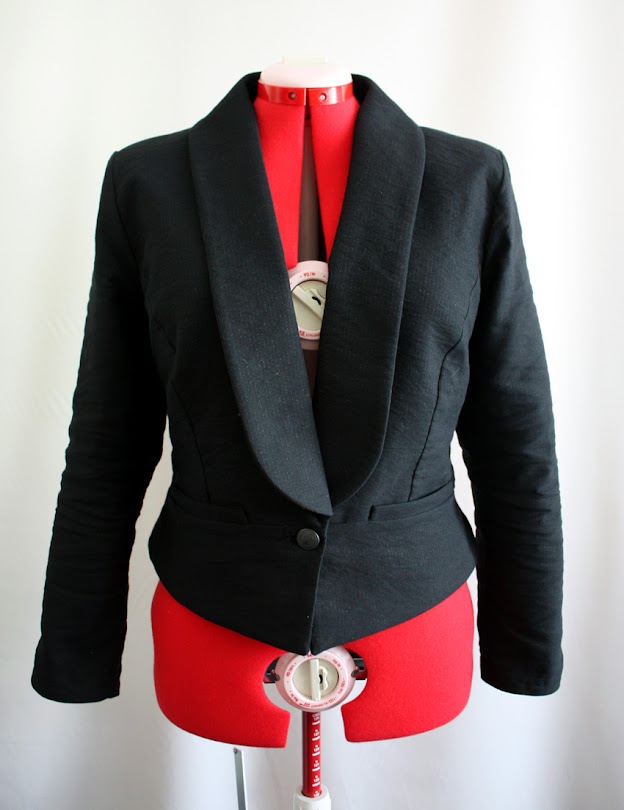 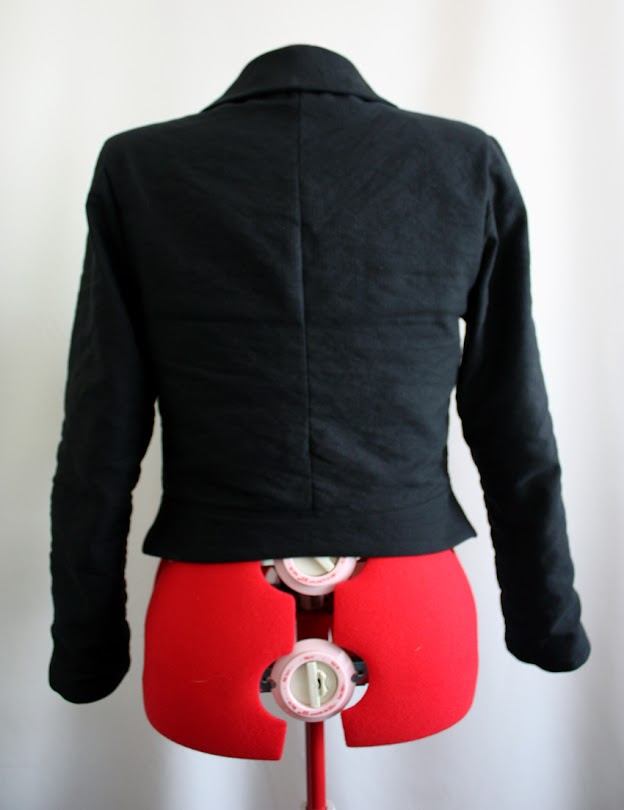 Even through this is a fully lined blazer, it stitched up quick! The shawl collar and single button helps but also the sleeves went in so easily.

This is my second Papercut garment (I have a finished La Sylphide that is awaiting photographs and a second in the works) so it’s no fluke.

I could gush at you all day about Katie’s amazing pattern drafting and construction. Recently I developed a bit of a sleeve phobia. Every sleeve I set in these days has so much excess sleeve head that I end up with a puffy sleeve no matter how it’s supposed to look or how I insert it. It usually take me 3 or 4 attempts until I am happy and I find it really frustrating. I can’t decide if it’s lazy drafting or if I should be insulted they expect we have such little skill we need all that excess fabric to play with.

Seriously though, I didn’t even need to baste these puppies in, perfect, first time, both sides, happy kiwi! 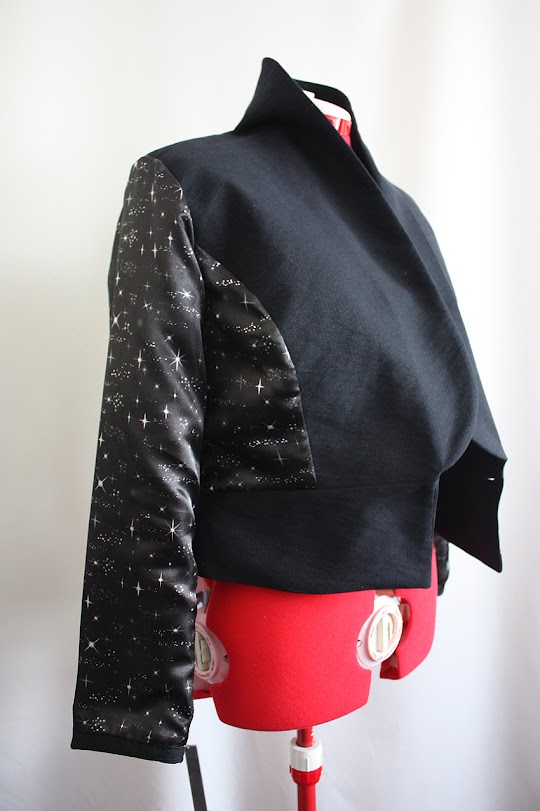 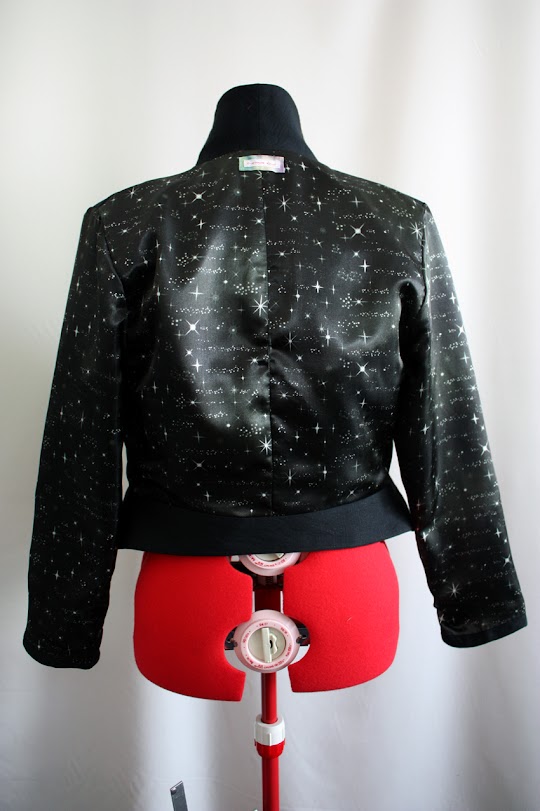 Aaaaand it’s an easy make. I think that even an advanced beginner could make this blazer. Hence the title of my post, sometimes you just have to give something a go, push yourself to learn. Katie’s instructions are so good, you won’t even realise that you’ve sewn those welt pockets until after you’re done! Honest.
. 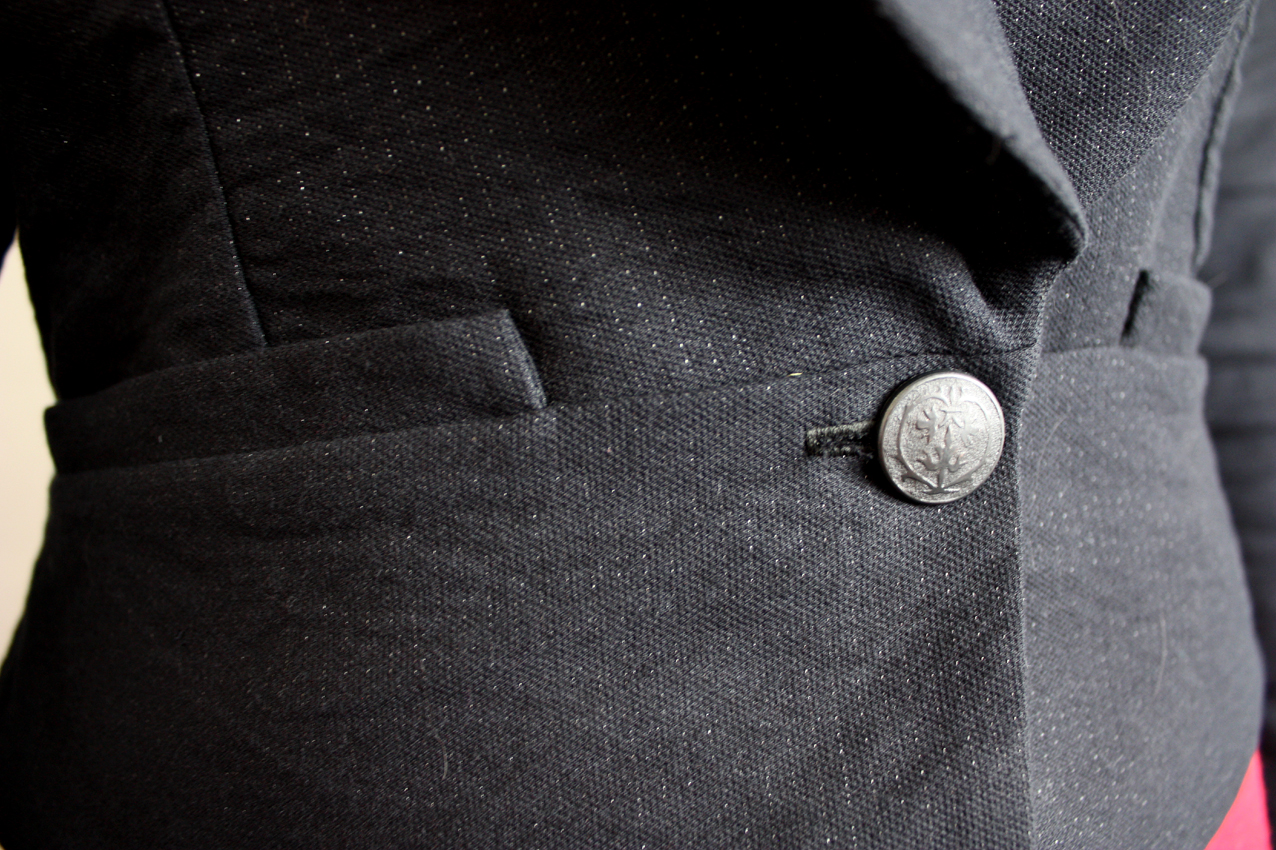 So, what do you think of the new patterns? Thinking of buying one, two, all of them? 😉 They are on sale until November 15th so pop on over and have a look.
. 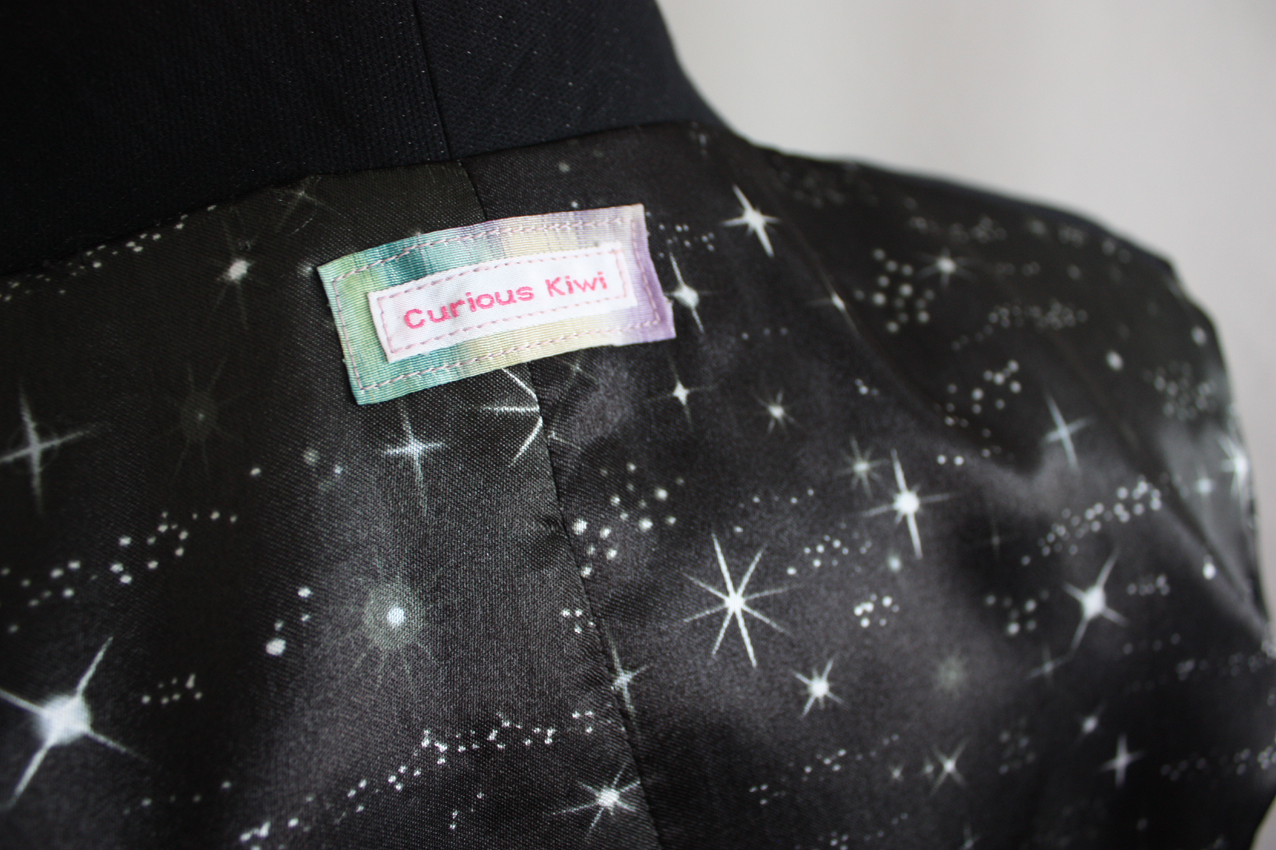 52 thoughts on “When you reach for the stars you may not quite get one, but you won’t come up with a handful of mud either*”