Every year (well, the last two years anyway, since that is how long the WSBN has been in existence!) we celebrate Christmas by swapping hand made decorations in the style of Secret Santa.

This year we used Elfster so that everyone could remain anonymous, even the organisers. Those that wanted to play signed up and received their partner along with three hints to help them narrow down all the options 😉 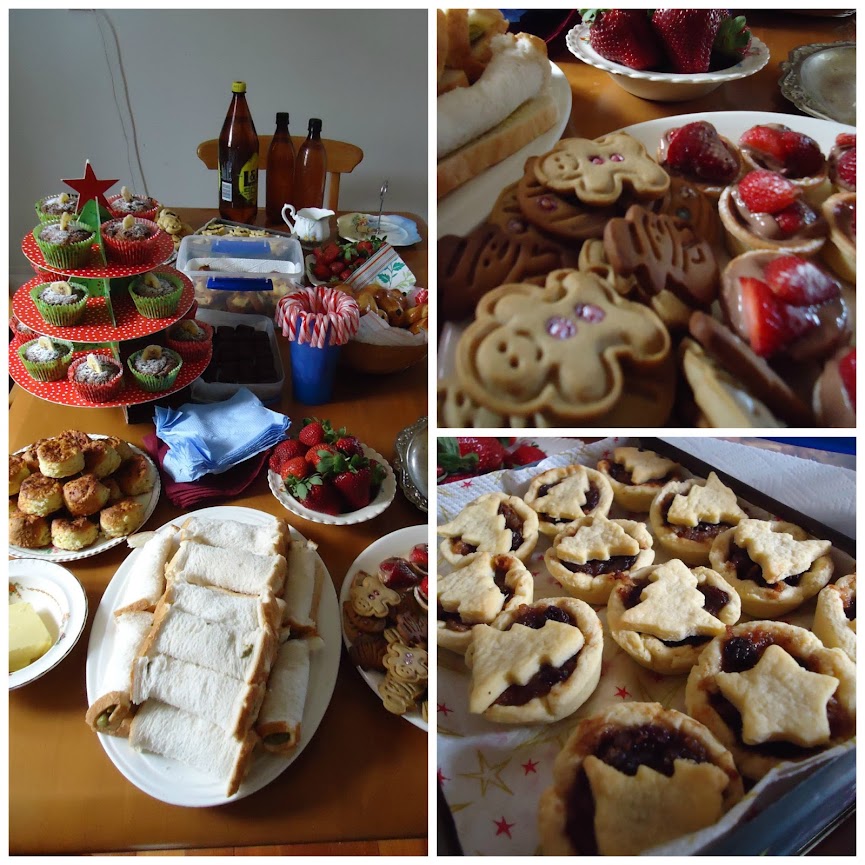 If you’ve had your eye on the WSBN for a while you’ll know there is one thing we do just as well as sewing…food.

It was a little chilly for our planned high tea picnic so we met at one of the WSBNers homes and spread out our glorious selection of treats. Yummy!

Later we got on with our swap and there was plenty of this: 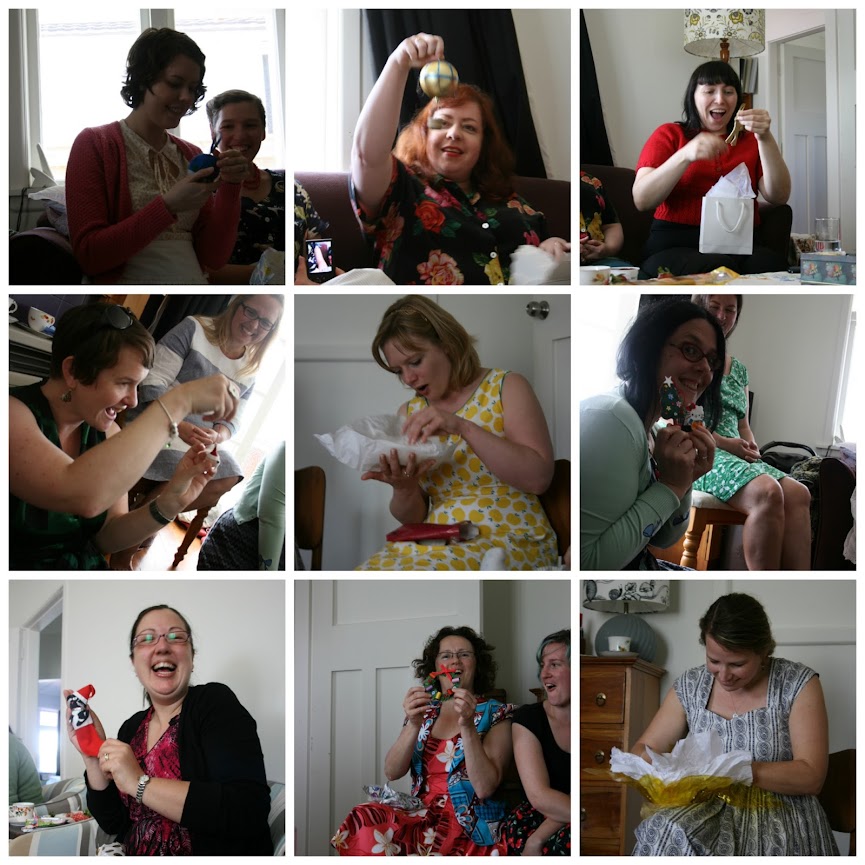 Everyone got fabulous decorations and it was so much fun to see each one revealed. Big thanks to Sandra for capturing all the reactions 😀

Sandra drew me and made this hilariously accurate and super cute Christmas Harri in a Stocking. 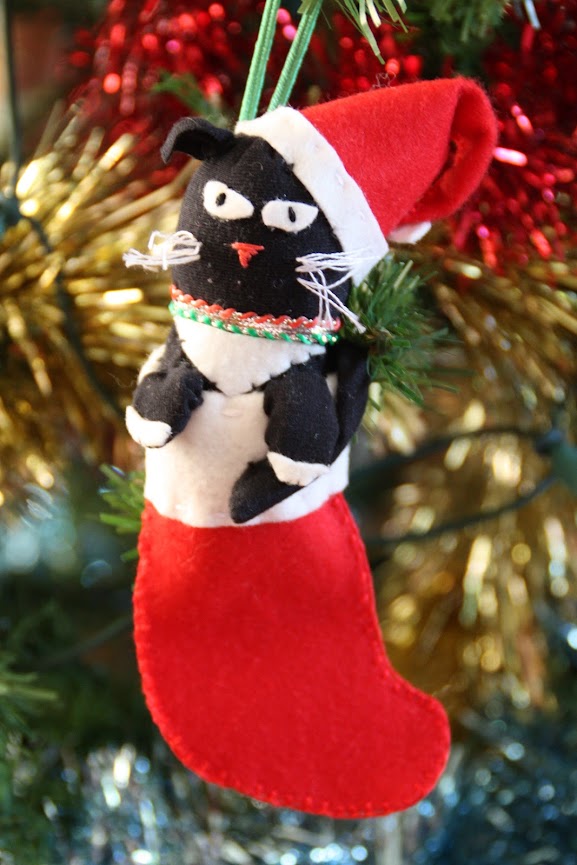 AMAZING right?! Sandra even stalked my Facebook photos to get all the white bits in the right places. Look at Harri’s little socks!

When I showed Christmas Harri to Nerdy Husband he was super impressed and took her out of my hands to hang her on the tree right away.

Sandra also gave me her back-up ornament, the one she made first in case Christmas Harri was a flop. I really like it too but Harri wins paws down 😉 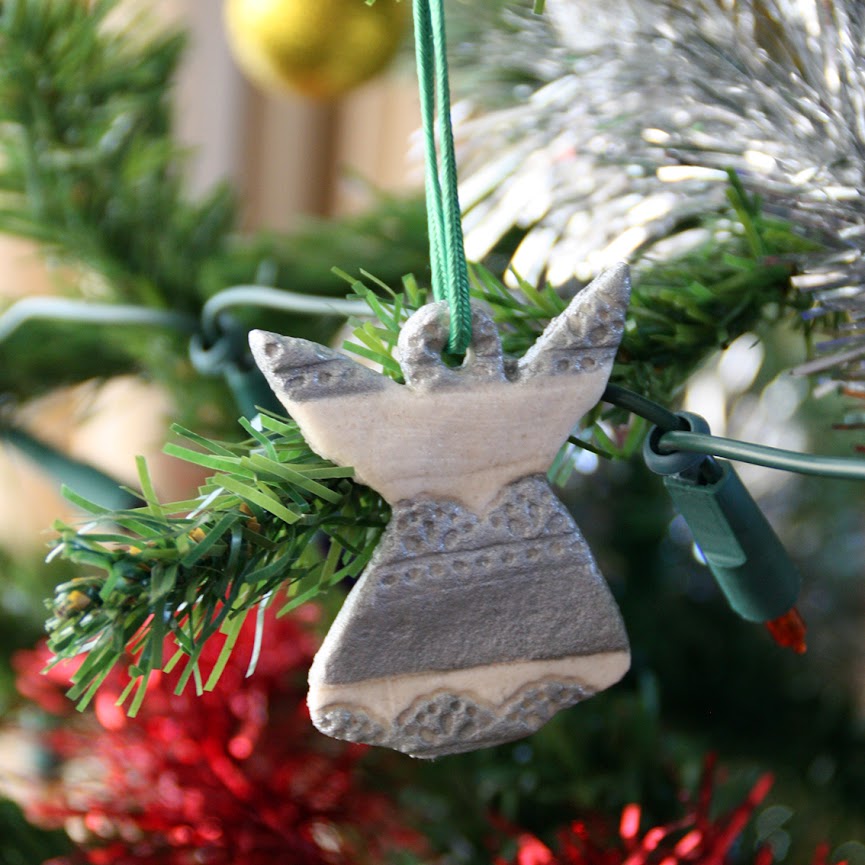 I drew Jenna and her hints included her love of birds. I’ve had a decoration idea in my head for while now involving native NZ birds but hadn’t gotten around to it so this year was the year!

I decided on trying to make a Tui since for me Tui = Christmas.

I shall explain: In New Zealand Christmas is during Summer which means BBQs, jandals, the beach and flowering Pohutukawa. 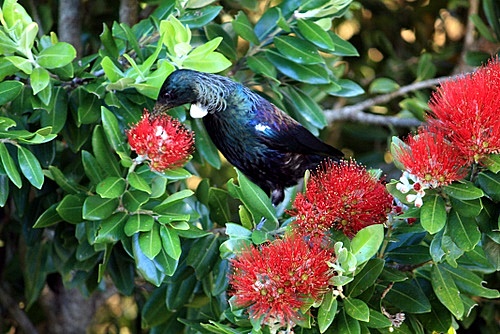 You might hear it called the New Zealand Christmas tree because of this (it’s also green and red) and the Tui flock to them to feed on the nectar.

Here is my inspiration Tui image courtesy of nzbirdsonline. 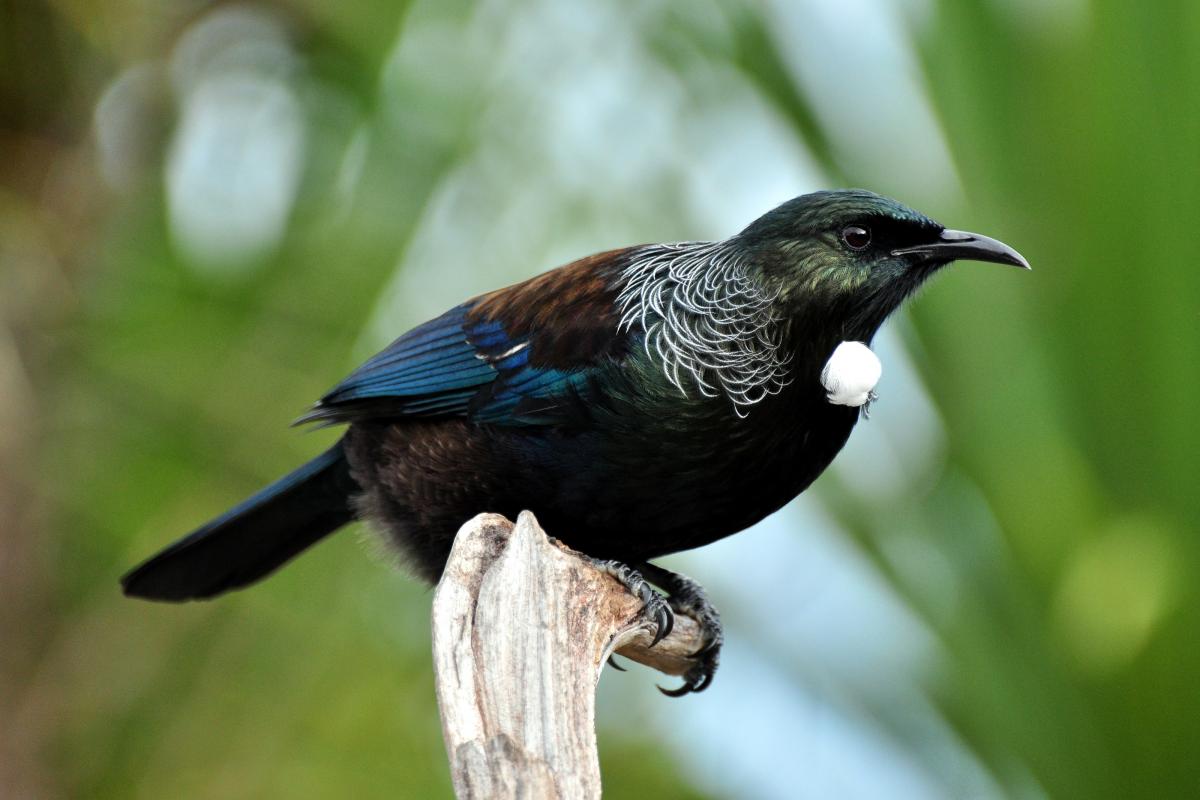 Tui are endemic to New Zealand, they have beautifully iridescent wings and a little white throat tuft. They are mimics and sing enthusiastic and complicated melodies that include gurgles, coughs and wheezing that have their own regional dialects. They are also super noisey in flight and sound as if in constant danger of crashing. I love them if you couldn’t tell… 😉

I started with Susan’s Gregarious Evening Grosbeak bird from her Downeast Thunder Farms blog. All her birds and other critters are amazing btw so go check them all out! 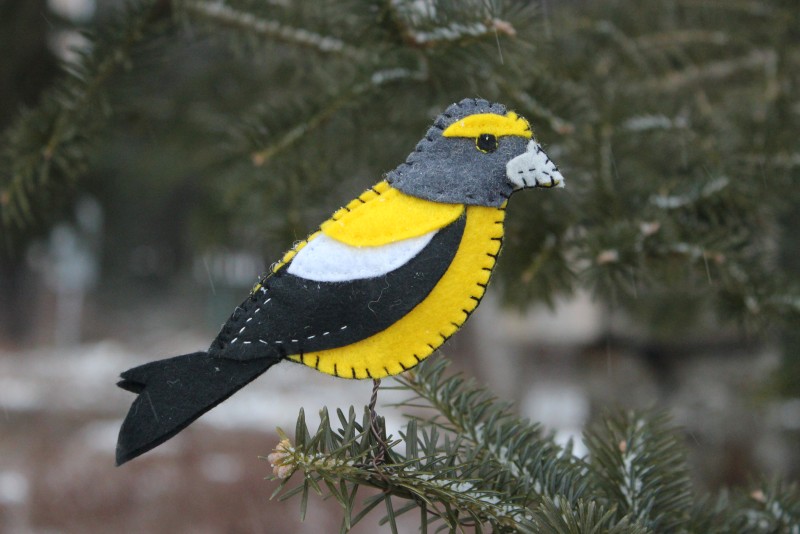 I omitted the beak piece and eye cap, extended the beak from the body and redesigned the tail. I added a second longer tail and the throat tufts then cut it all out of felt.

I cut the first body out of brown but it looked terrible so swapped to black and added green, blue and white felt for the other pieces. 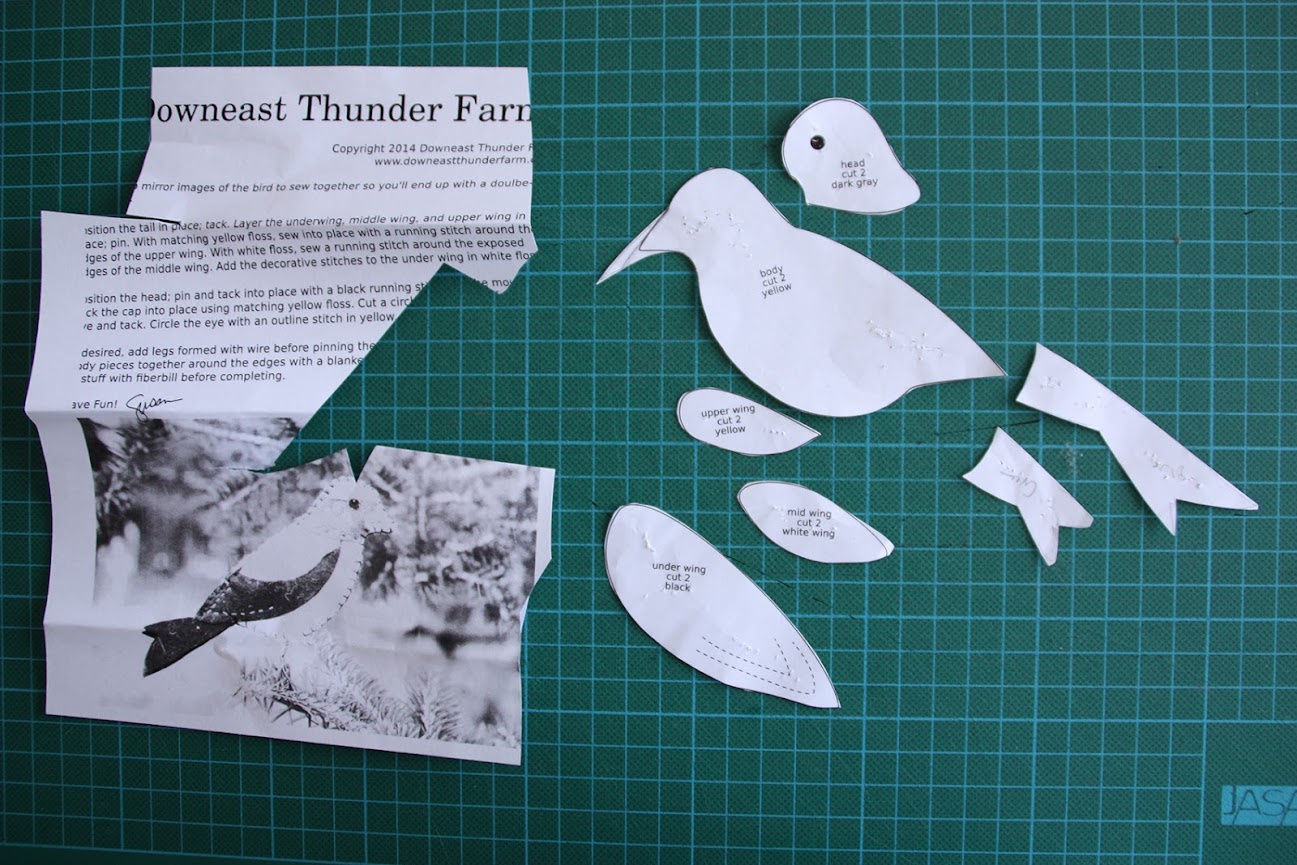 I used black beads for the eyes and hand sewed the whole thing with matching thread and contrast on the wings. I really enjoyed this hand sewing because it was a lot of fun to see the bird take shape. I also slightly over-stuffed it because Tui are generally a little chubby.

When I was done NH said it needed legs to I dug out some wire and my pliers to bend some little feet. I made one foot then I pushed the wire though the body, bent the legs down and made the second foot. They kind of swing about but I like that. 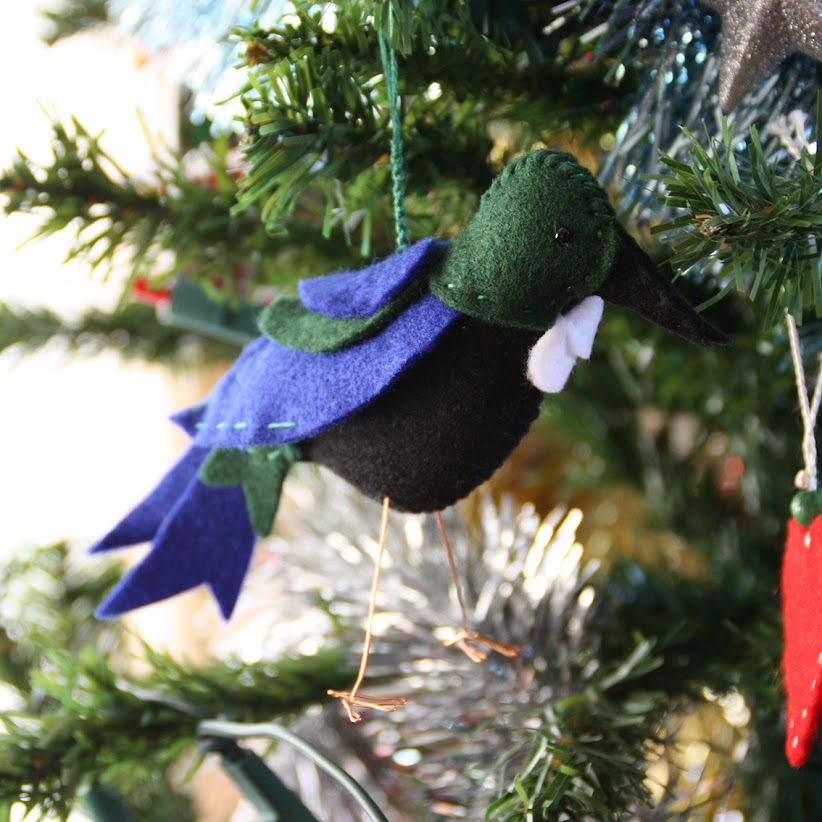 I inserted a thick needle into the neck to find the right balance point and then used green floss for the hanger so that it blends in with the tree.

I liked my Tui so much that I didn’t actually want to give it away so I made another one for myself..and then two more. You can envision my evening of watching old Stargate SG-1 (mmm, Richard Dean Anderson…) while working on my Tui production line.

By the end of the third episode I’d created a little felt Tui army that I wish I’d remembered to take a picture of. I also wish I’d had my camera ready for when Harri took an experimental bite of one. I kid you not!

One of the spare Tui went to Fashionable Younger Sister and the other to my In-laws. 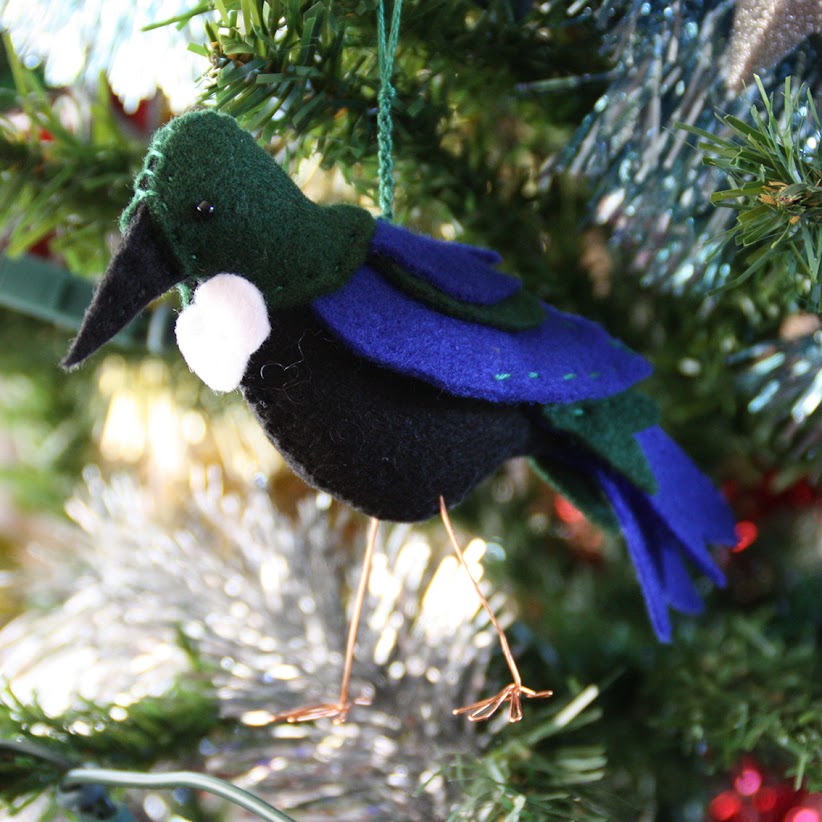 And that is how the WSBN celebrate Christmas, may our Decoration Swap tradition last long into the future…I’m going to need a bigger tree! 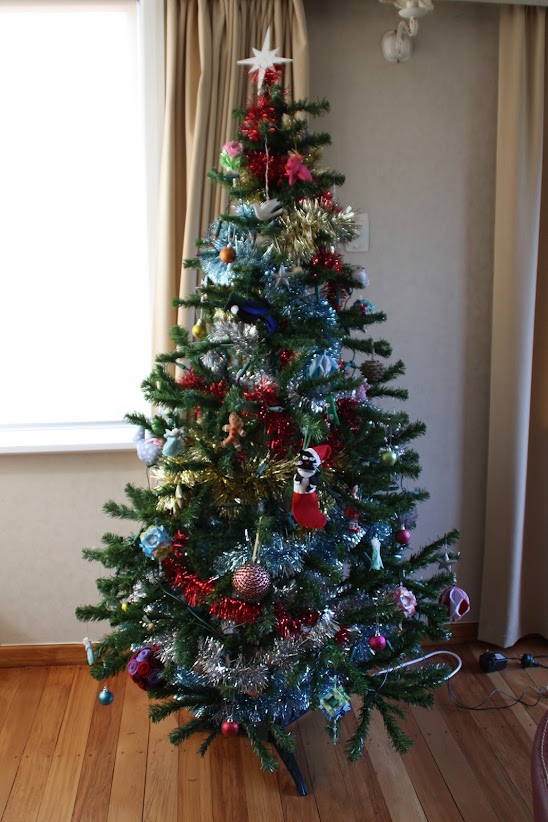