*This time with no Christmas because I’ve realised this needs to be a three-parter so that’s stuffed up my post titles. Stick with me, Part Three does have Christmas…and cake.

In June of 2018 J, who I work with and was a few weeks away from going on Parental Leave, approached me shyly in the photocopier room. Her sister had given her their old Baby Björn Bouncer frame but had lost the cover. She had found a pattern on Etsy and was wondering if she bought it would I be able sew one up for her for payment.

I took a look at the link she had on her phone, the “pattern” cost just over $12.00 which kind of offended me. Maybe I’m over-reacting and perhaps this isn’t how it went down, but if you’re going to trace a pattern off something existing, don’t go and sell it to people for $12.00 (I’ve bought physical copies of complex designer Vogue patterns for a fraction of that), it’s just rude.

I really like J, she’s a real sweetheart and I was secretly flattered that she approached me. I also couldn’t take her money. I was excited to make something for her future little girl and also up for the challenge. I told her if she bought and pre-washed the fabric I would happily make it as my gift to her. But I also told her not to buy the Etsy pattern, “Leave it to me”…

I went back to my computer and found a free version within 30 seconds. I downloaded it and printed it off and went to show J. I explained that I wanted to test the pattern by assembling the paper pieces first and then I would work out how much fabric she would need to buy. We talked about what fabrics would be appropriate and where to buy the cutest prints from. 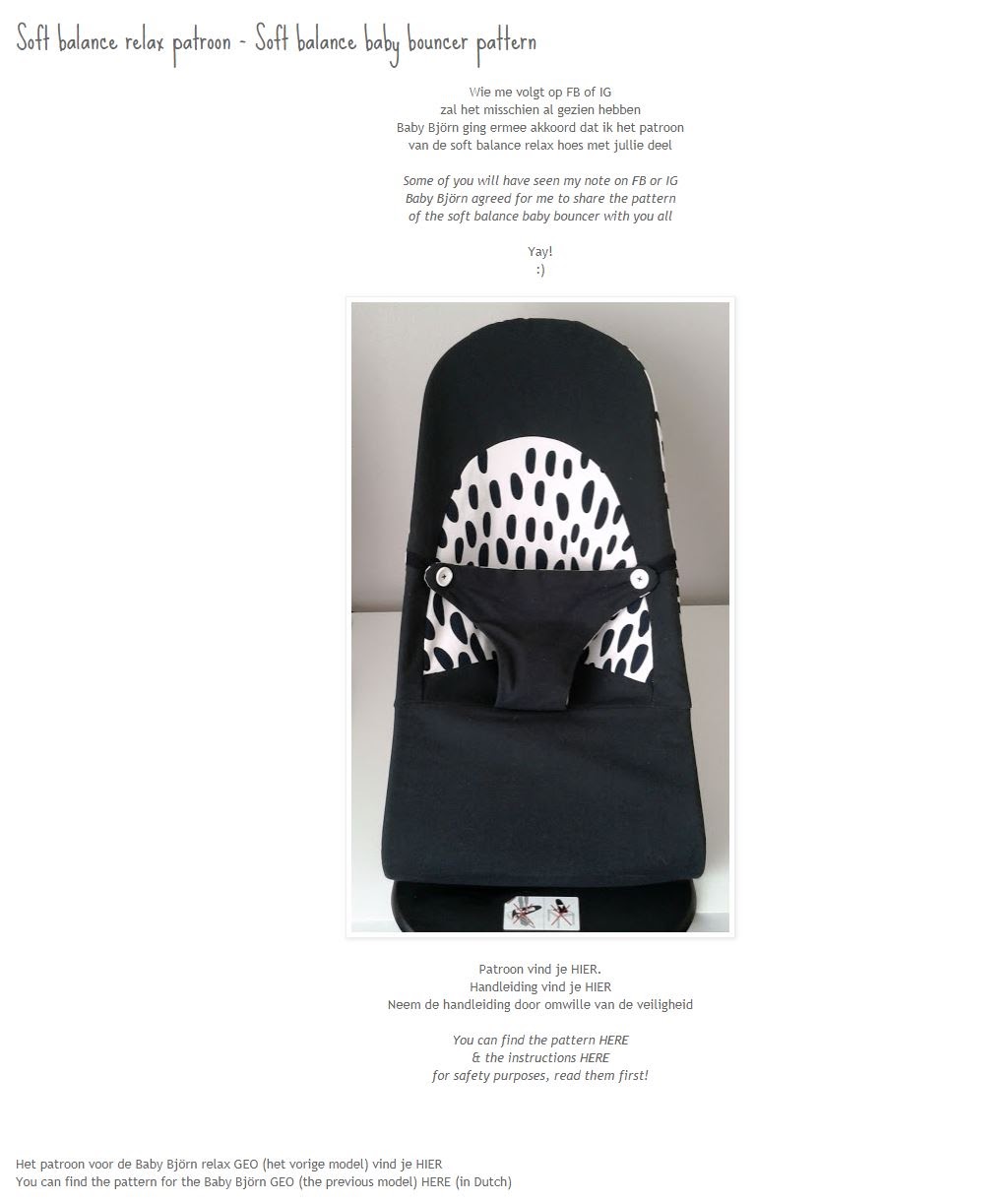 The pattern is by Twee emmerkes water, you’ll find the pattern here.

So not only is this pattern free but the author even checked with Baby Björn that it was ok for her to share it on her sewing blog. Perfect.

It’s hand drawn but is well laid out, has all the notches marked and includes a test square so you can check printer scale. There is also a layout plan of how the sheets go together on the last page. It could use a few numbered notches to help you work out which piece attaches to which but it’s not that tricky to work out. I’ve paid money for much worse.

I assembled the pages that night and drew up the extra pieces as described (see the tracing paper pieces to the right in the second photo). 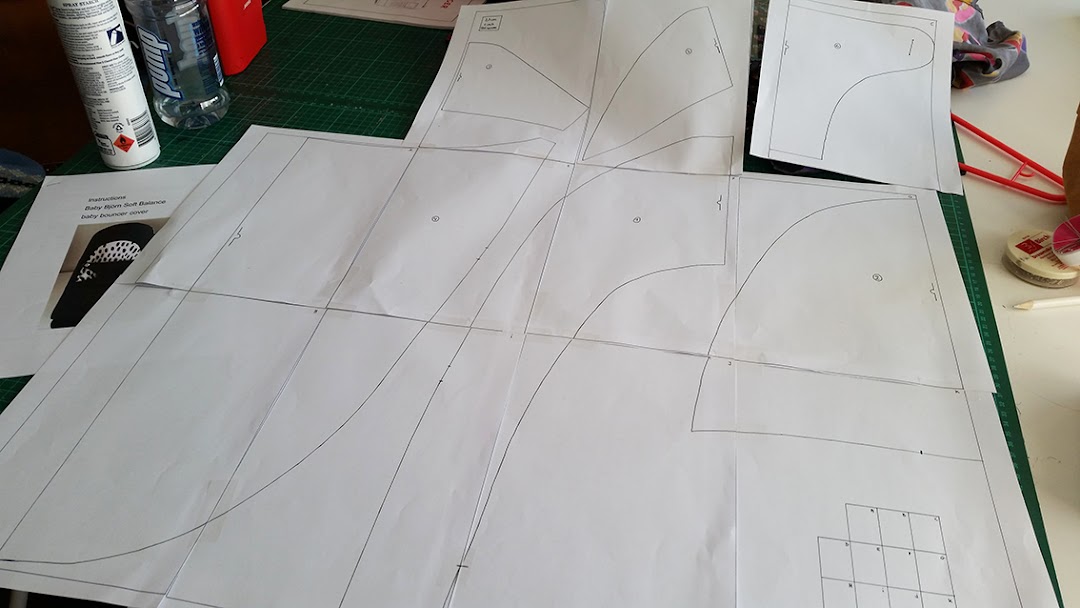 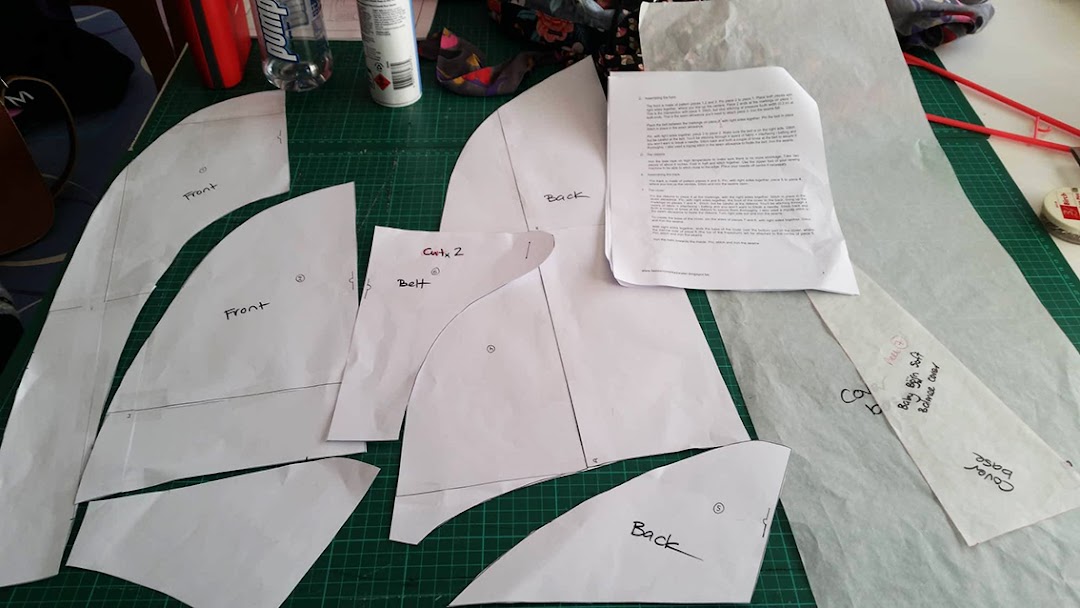 I read over the instructions and added the names to each piece which are only numbered. Then I “sewed through it in my head” and it looked promising.

The only thing I couldn’t find was an accurate seam allowance. The instructions say “Sew on pressure foot width” but sewing feet come in lots of different widths…I walked the seams of a few of the pattern pieces, one pairing suggested 0.5cm and another suggested 1cm and since this is all hand drawn I shrugged my shoulders and sewed with a seam allowance of 0.7cm which is a bit less than my current presser foot width.

Apart from the loose seam allowance suggestion I only found one real error in the instructions. Step C: Assembling the front states, “Place the belt between the markings on piece 3, with right sides together.” – there are no markings on piece 3, there are on piece 2 but as far as I could tell from photos this is not where the belt should be attached, as this is the back seam of the seat area. I decided that the belt should be attached to piece 3 as instructed and relocated the notch from piece 2 to the front edge of piece 3. 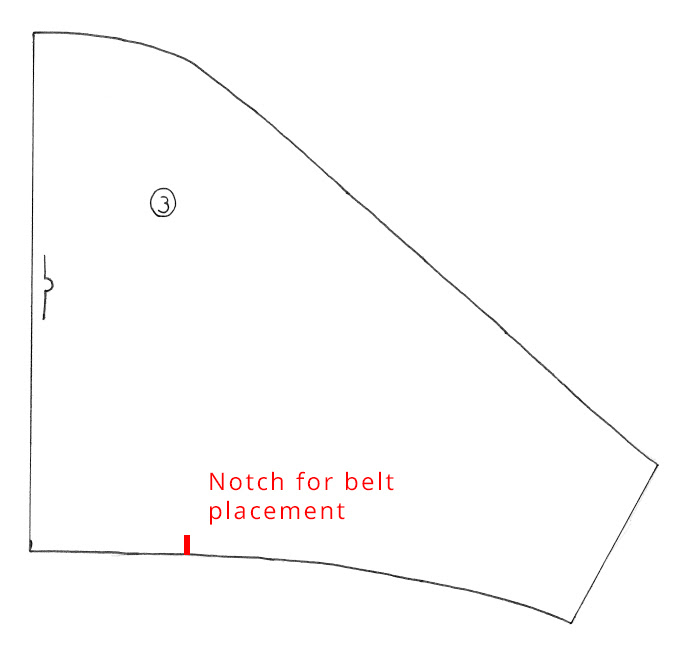 While I’m at it, if your belt is different fabrics inside and out then the wrong side (or inside) of the belt should be against the right side of piece 3. I’ve got photos coming up, don’t worry, you got this! 😉

The pieces lined up more or less with J’s measurements too. 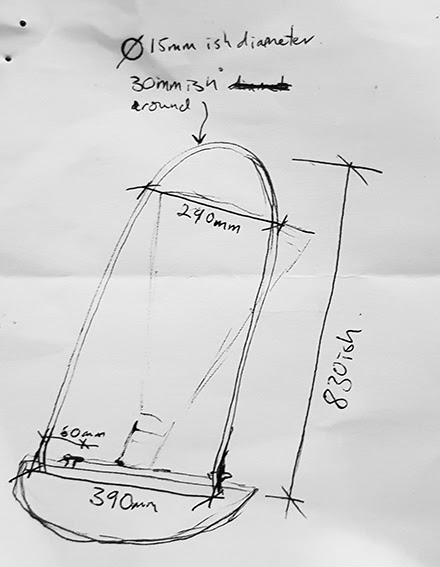 So I messaged J, “great success” and because we’d discussed making the bouncer in two fabrics I told her to buy 1.2 meters of the main fabric (112cm wide quilting cotton) and 40cm of contrast.

You guys, she bought The. Cutest. Fabric. Ever. 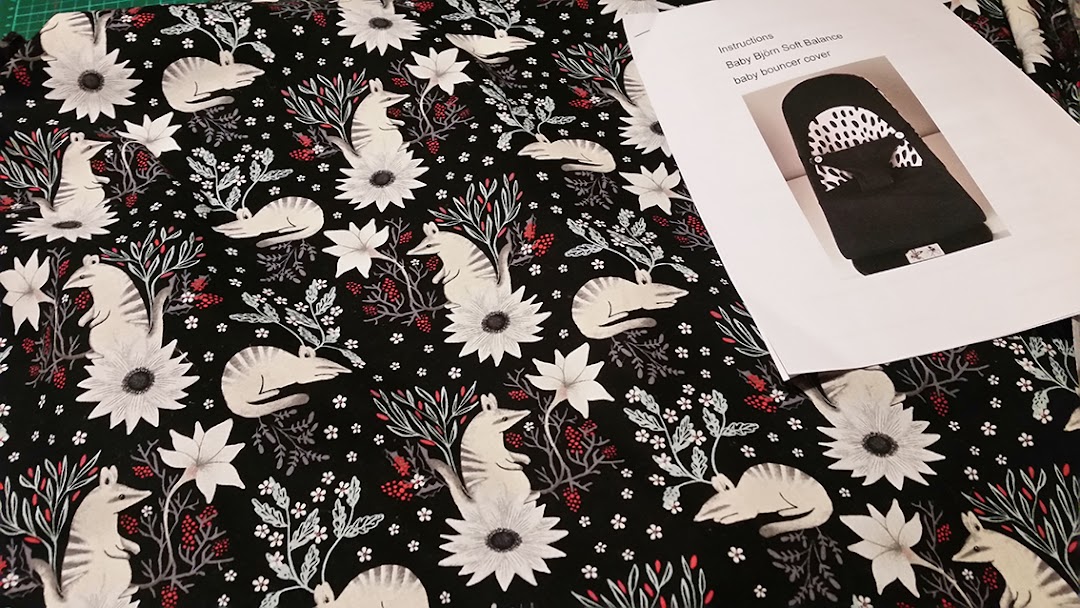 I actually died when she showed me. So cute.

The contrast fabric is grey with Japanese styled clouds which you’ll see later. Both fabrics were a little on the thin side however nothing some over-zealous interfacing with an ElnaPress couldn’t fix. 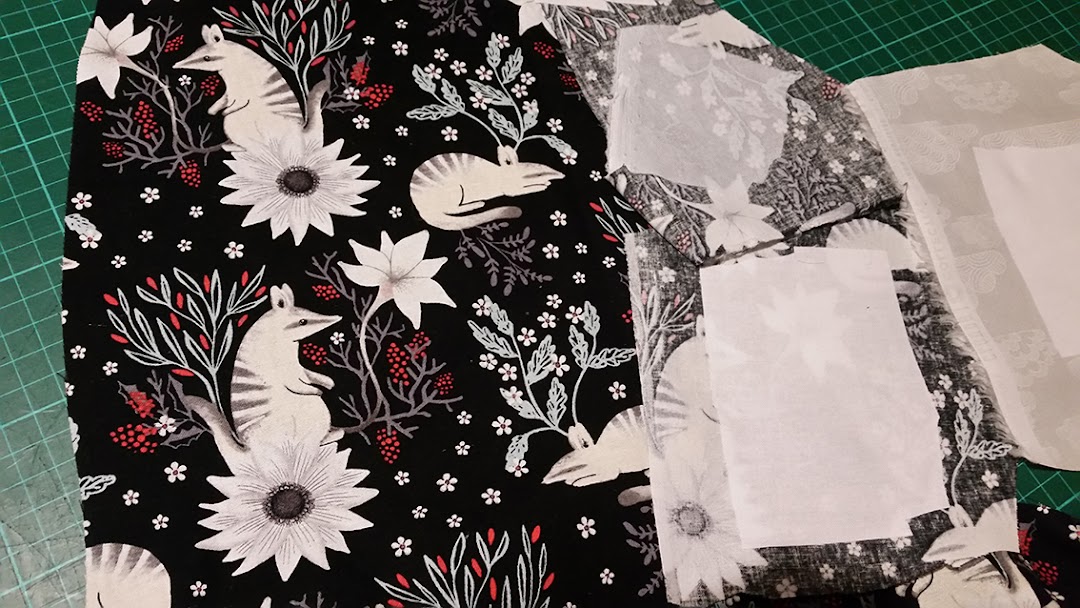 I did some tests first and went with the thickest stuff I own. I’ve had this in my stash for ages. A remnant from when I was learning to sew and just starting to use interfacing. I bought some that was way too thick. It was really great to finally have a use for it!

Next I cut out very carefully so that I didn’t decapitate any numbats. 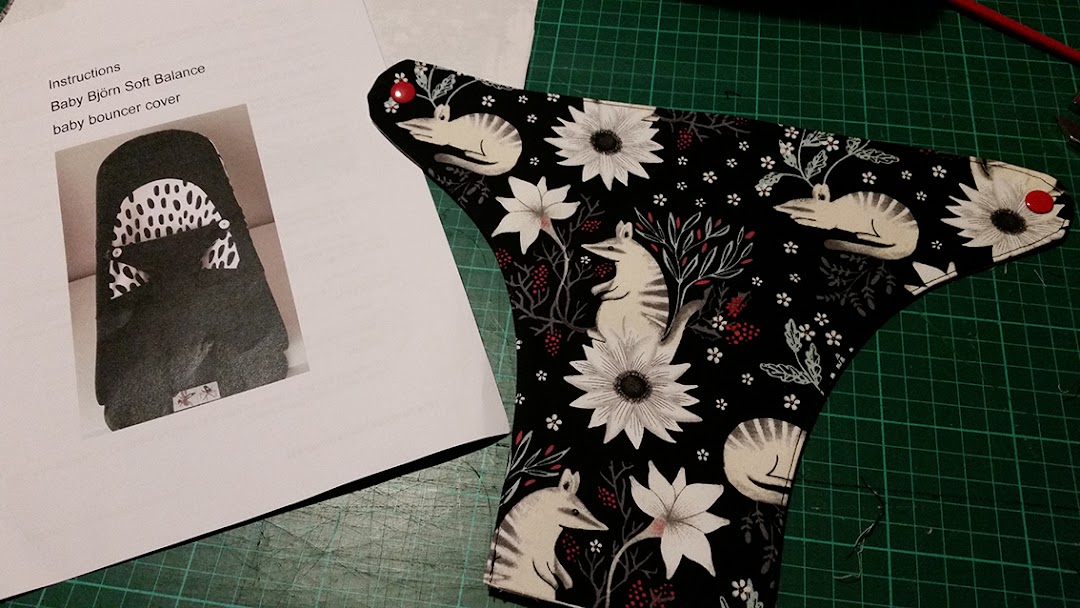 The original pattern calls for buttons on bias tape ribbons to hold the belt. I’m a bit nervous when it comes to babies and buttons (nothing smaller than a film canister I remember being told…people don’t even know what film canisters are these days right?). So I went with some red hammer-on snaps from my stash that match the highlights in the fabric perfectly. I told J I would swap them out for something more robust if she felt the closure wasn’t strong enough.

In fairness to the author, the instructions do say, “Use big buttons (1 inch diameter) and attach them firmly to the ribbons…Do not forget to check the buttons regularly, especially after every machine wash.” 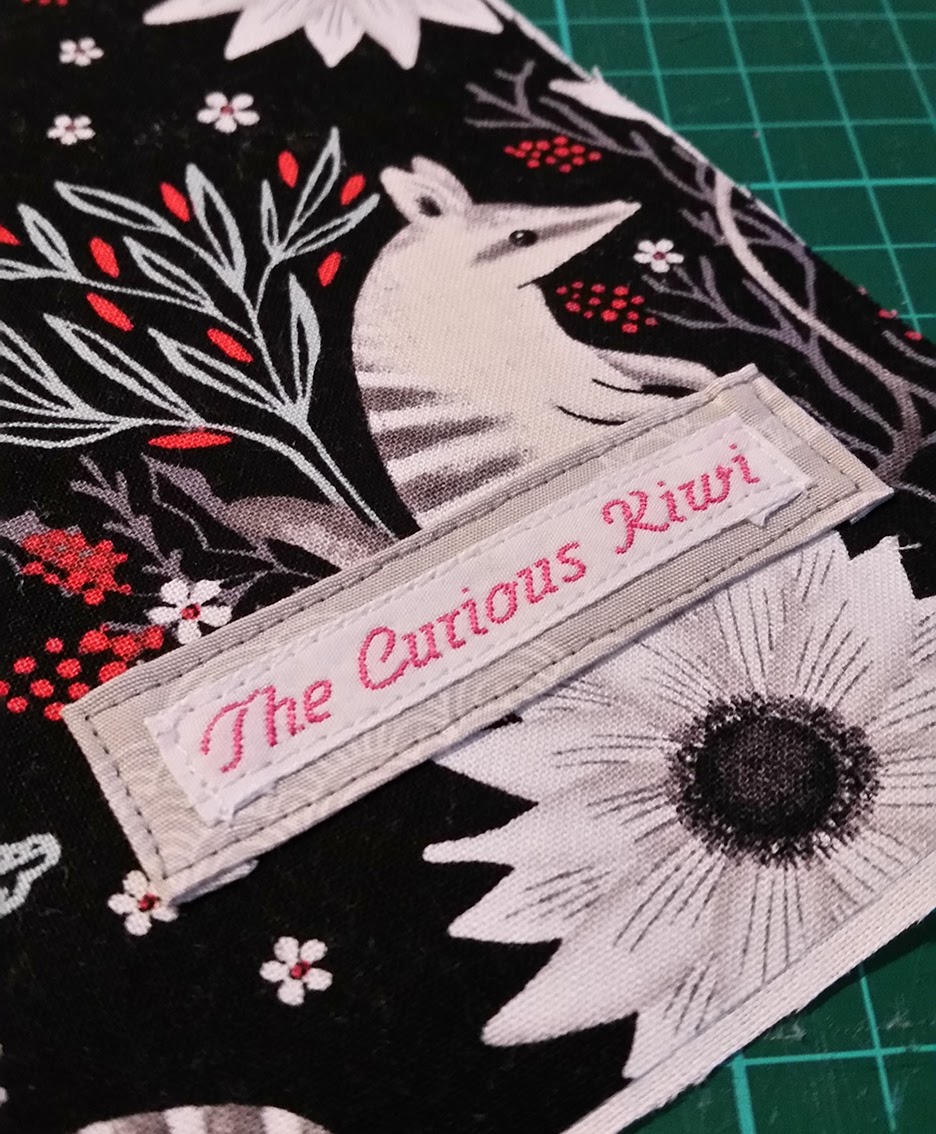 Everything went together smoothly, all pieces lined up well.

Here is the belt stitched to the front edge of piece 3, I would call this the seat bottom. 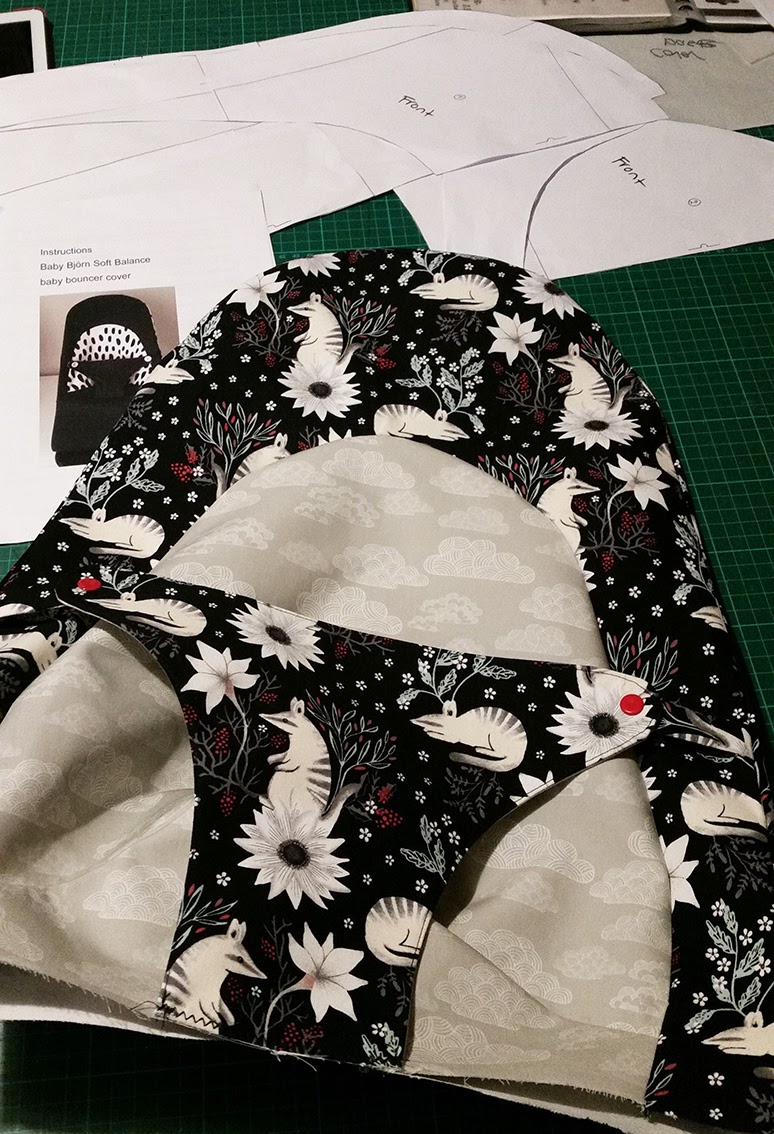 All the seams are sewn and then overlocked so that I can be machine washed. It really didn’t take very long to make, maybe two hours tops. I probably spent more time interfacing than sewing.

I had fabric left over because J bought extra. I tried for a while to piece out a small dress but there wasn’t quite enough. I ended up making 3 dribble bibs, a basic triangle with a button hole at one corner to poke the other end through. I forgot to take a photo of these.

I wrapped everything up and gave it to J promising I would make adjustments to the cover if it didn’t fit the frame. It looked so good and I was really nervous. I’d shunned the paid pattern for a freebie and assumed the seam allowance, but guess what… 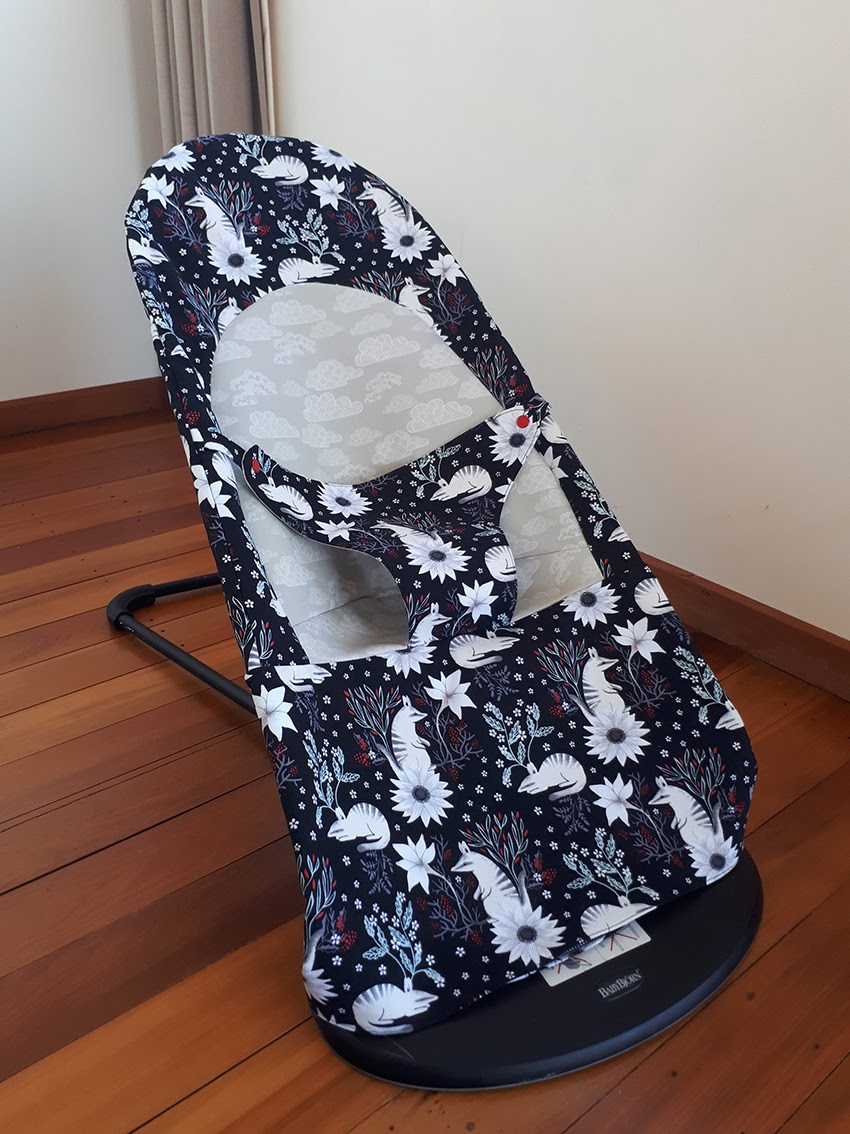 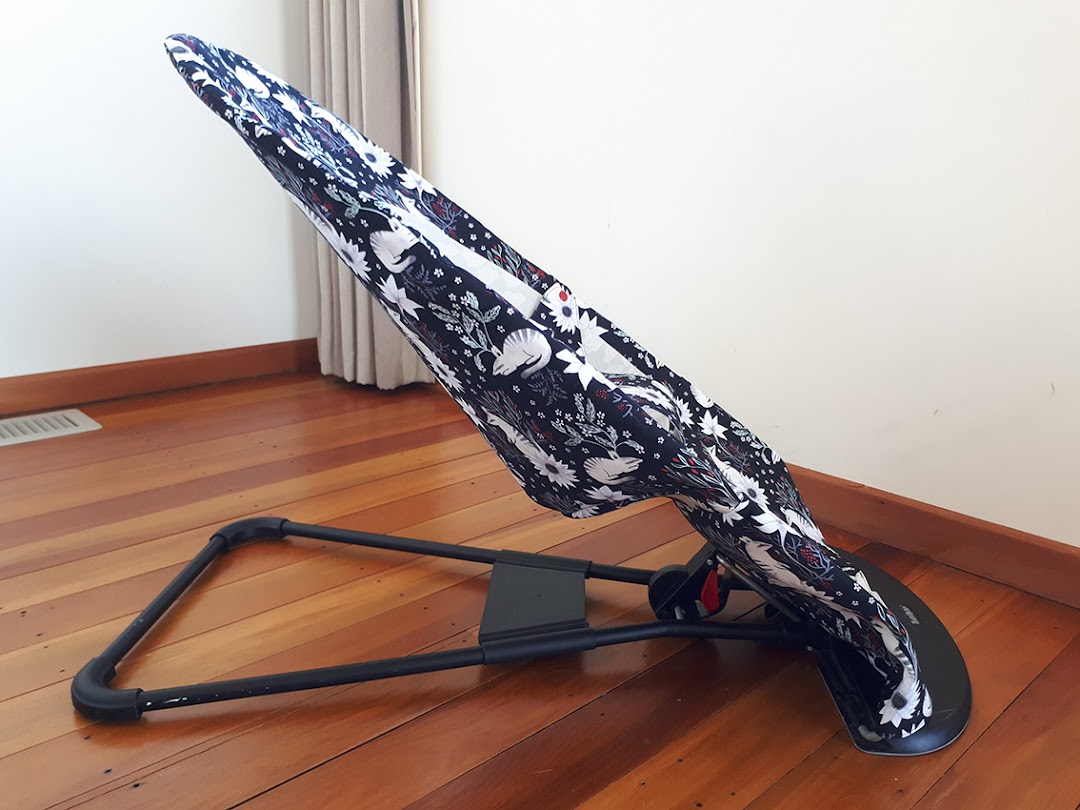 I was so relieved and it looked really cute on the frame.

The belt seems to be located correctly and below you can also see the “ribbons” I made for the other side of the hammer-on snap fastening. 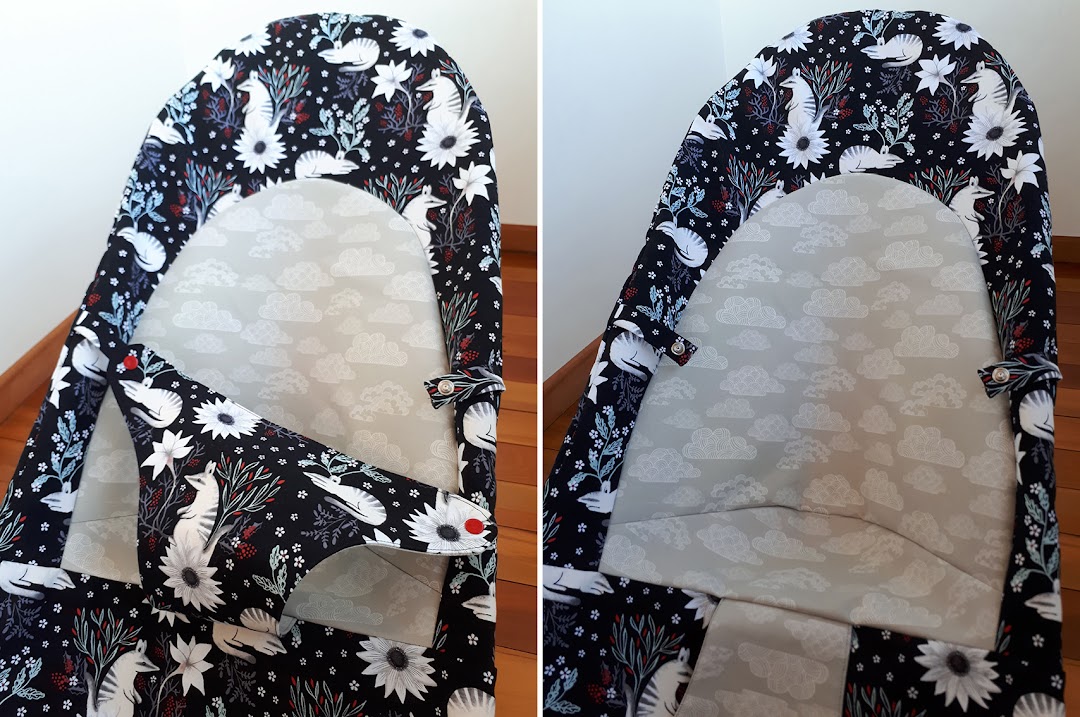 Want to see something even cuter? 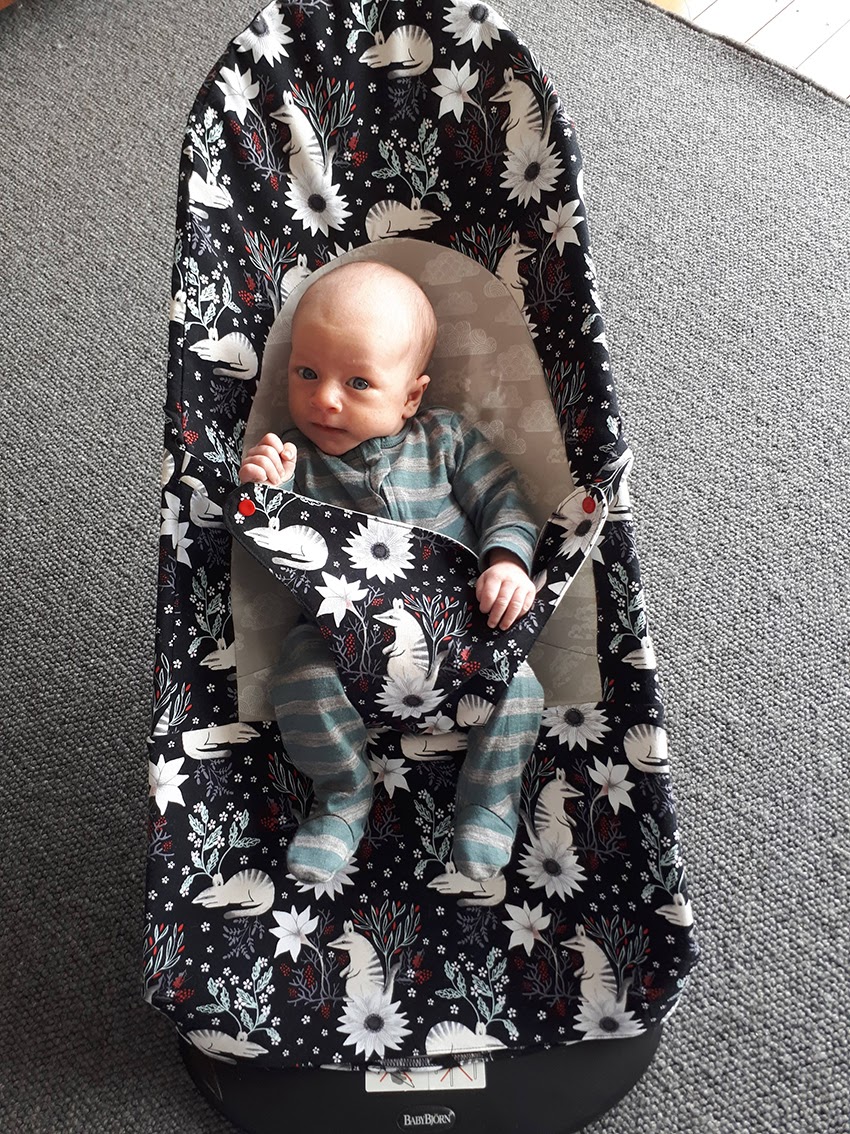 Aww! Hello baby E, stealing the cuteness from the numbats! ❤