To be read in the voice of David Attenborough:

New Zealand is a small nation of islands with a short but rich history of strange and unique creatures. Many readers will be familiar with this countries flightless national symbol, the Kiwi, and maybe even its extinct ancestor, the giant Moa.

Amongst the more interesting and sometimes frightening looking specimens are Tuatara, living fossils who lived alongside dinosaurs 220 million years ago, and the completely harmless, although it doesn’t look it, Wētā.

Even with all this native strangeness few ever imagined that New Zealand could also be sanctuary to Gru novaezelandiae, more commonly known as Domo-kun, and up until recently this was the only known photograph ever taken of one in the wild. 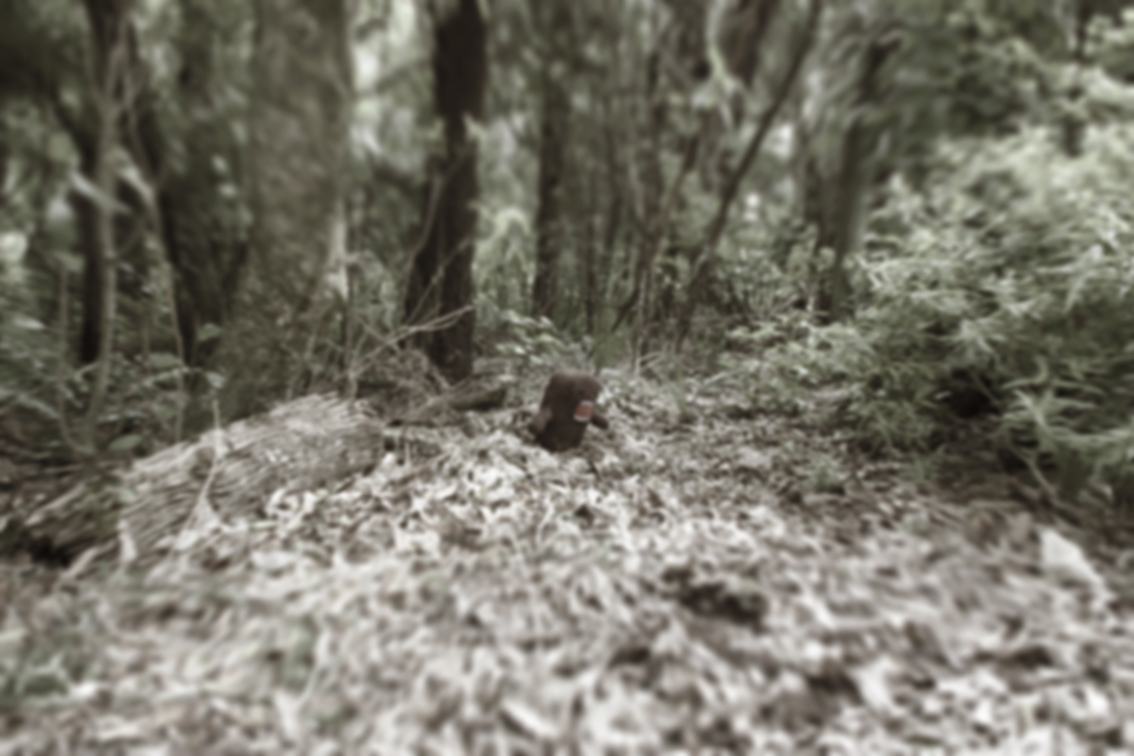 Little is know about this mysterious creature but in the last few months we have been lucky to travel deep into the New Zealand bush to investigate the possibility of its existence and we were fortunate to get a glimpse of what was previously thought only rumour. 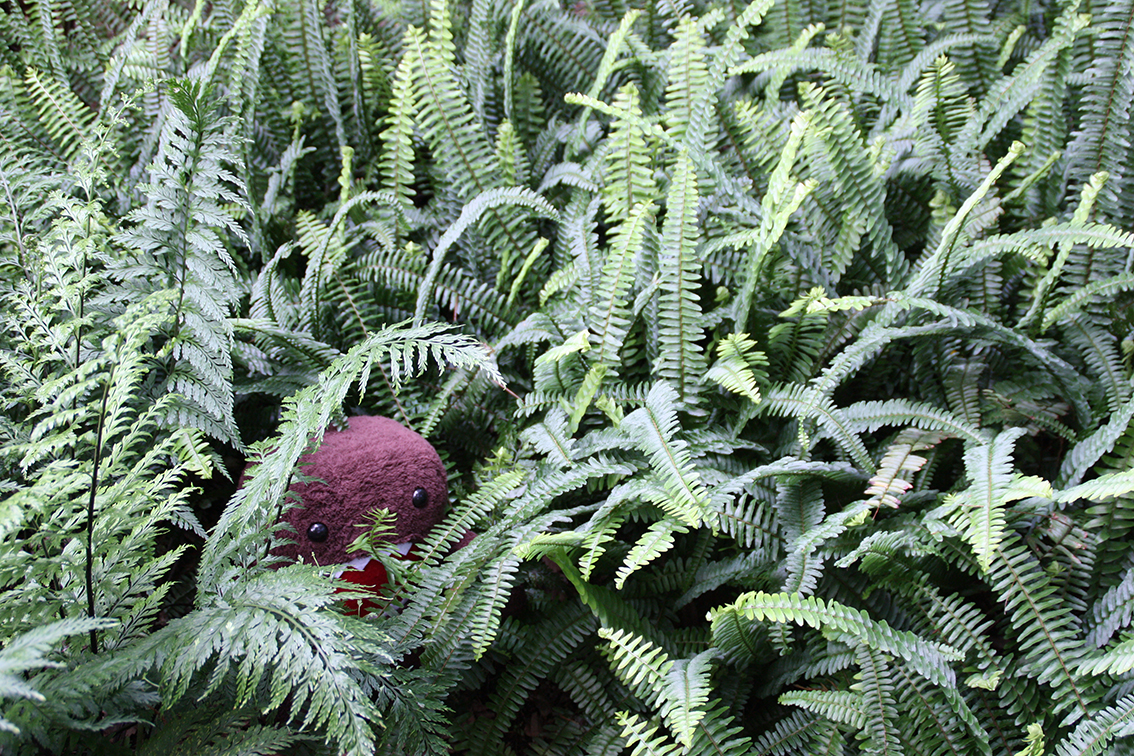 We followed this shy creature for several hours, gradually getting closer as it grew more comfortable with our presence. 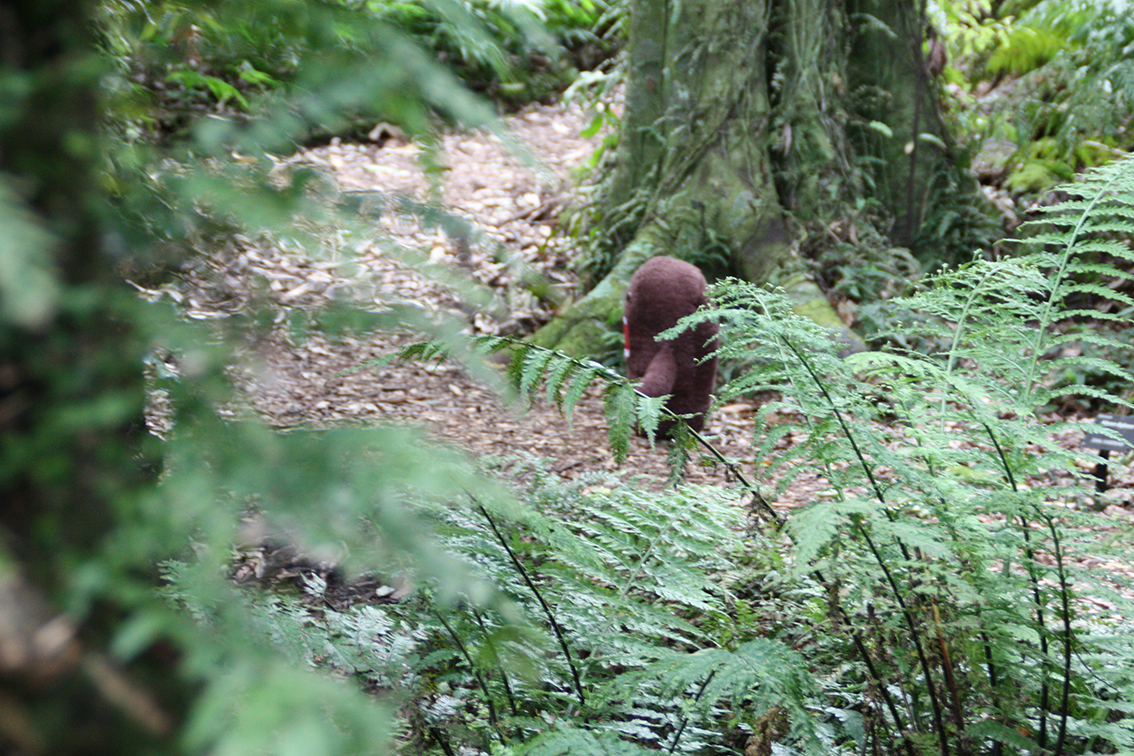 It was as curious about us as we were of it and eventually it grew bold enough to show itself in the open. 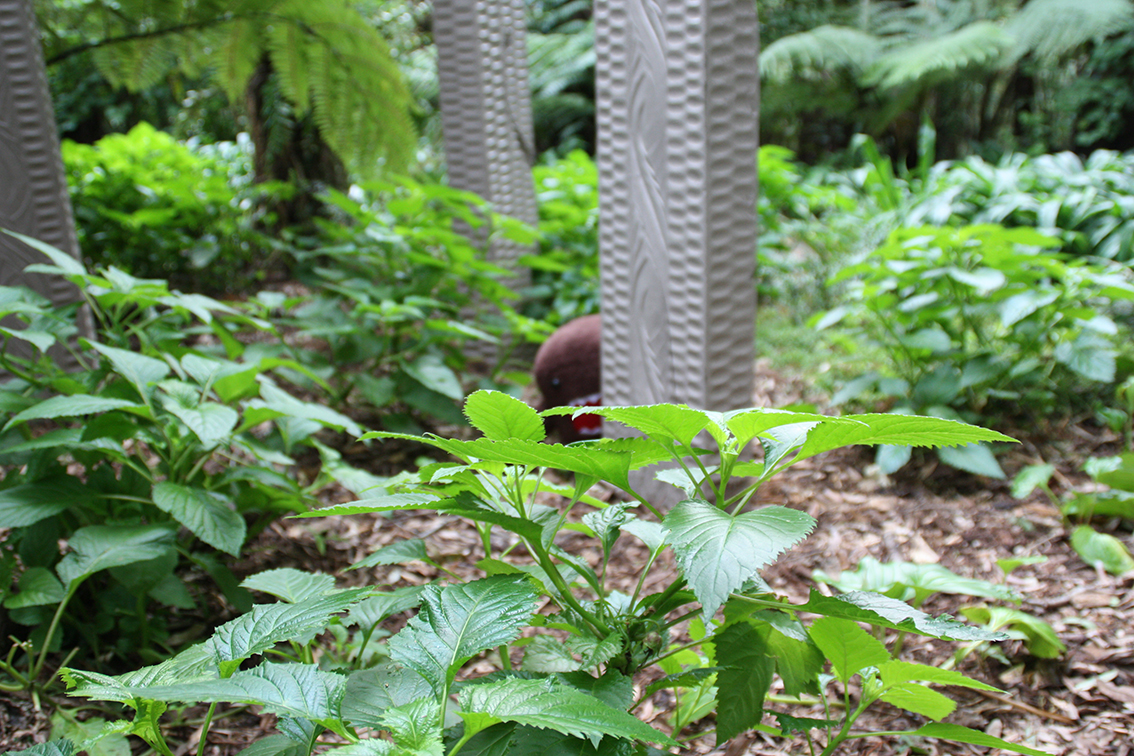 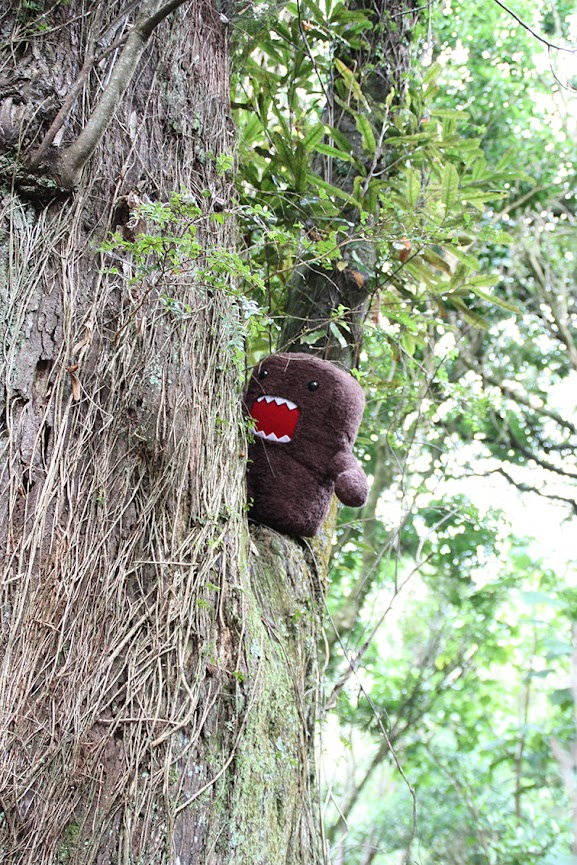 This is of course Domo-kun, official mascot of Japan’s public broadcaster NHK, and I am very proud of him. 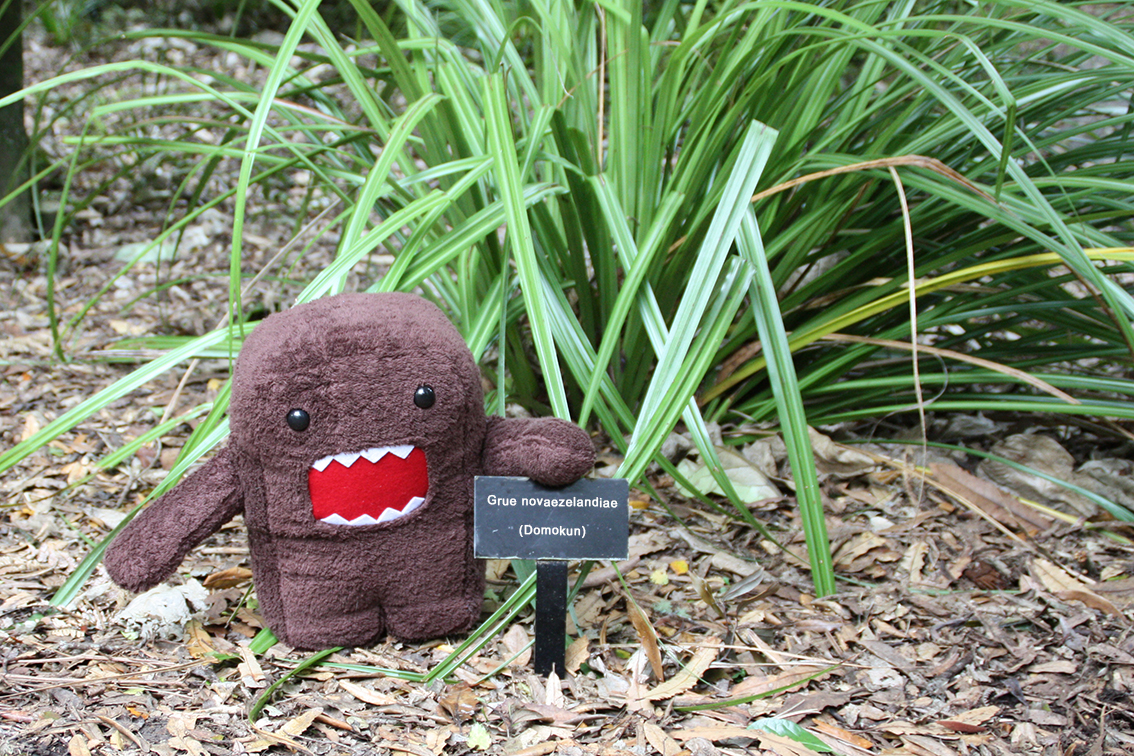 He was a requested project by someone who wishes to remain anonymous but let’s just say said person likes to watch nerdy things on YouTube and in one such video there was a giant furry Domo-kun in the background and a plan was formulated.

The initial idea was to find some faux fur, or perhaps a chunky fleece but the colour was just as important as the texture. Domo-kun’s pelt is very specific.

The hunt began at Spotlight in the city and then The Fabric Warehouse next door which both had nothing suitable. Next stop was Pete’s Emporium in Porirua, a large store of ridiculously random and often surprising merchandise. They had a lot of fur but nothing quite the right shade of Domo-kun brown.

As a last resort we went into the Porirua Spotlight which is planned such that the shortest route to the fabric (one must ALWAYS take the shortest route in a Spotlight store) is via Manchester and its various discount bins…where I was immediately drawn to some hideously textured towels in a hue that could only be described as Domo-kun Brown (Spotlight called them “Espresso but “Poo Brown” if also accurate). My accomplice also stopped, staring at the towels (which I was now petting) and we exchanged a grin.

We had found our Domo-kun pelt.

We added some red and white felt for the mouth, the biggest black plastic eyes we could find and a bag of hobby fill. We were ready to bring Domo-kun to life. 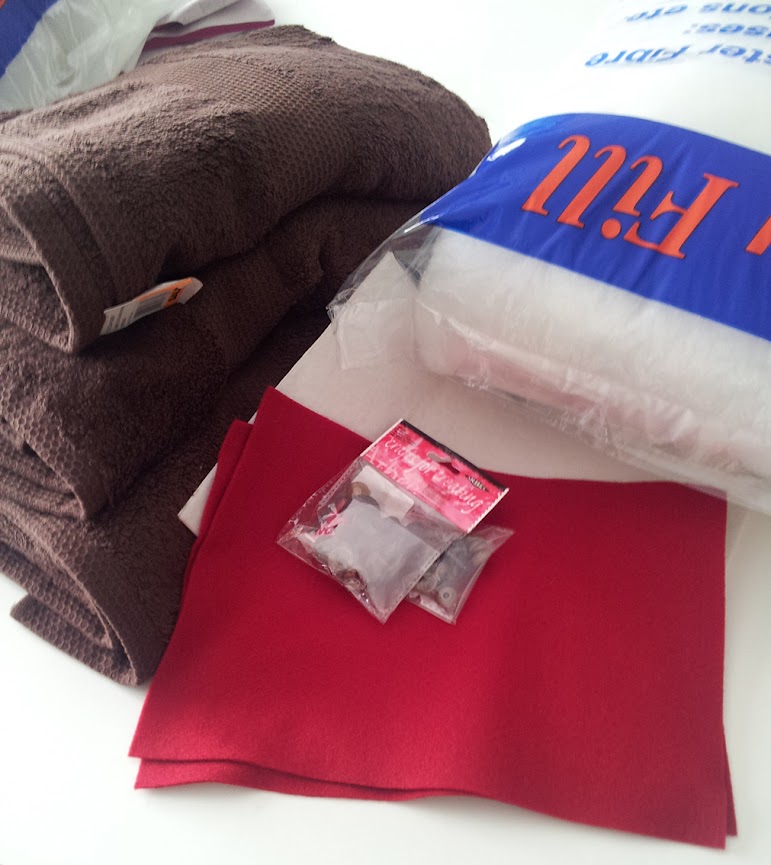 Back at home we selected a good Domo-kun outline from the internet and used the eyes to scale up as a pattern.

It was not quite as big as my accomplice wanted but big enough far as I was concerned.

I winged the construction so I’ll mostly let the photos speak for themselves: 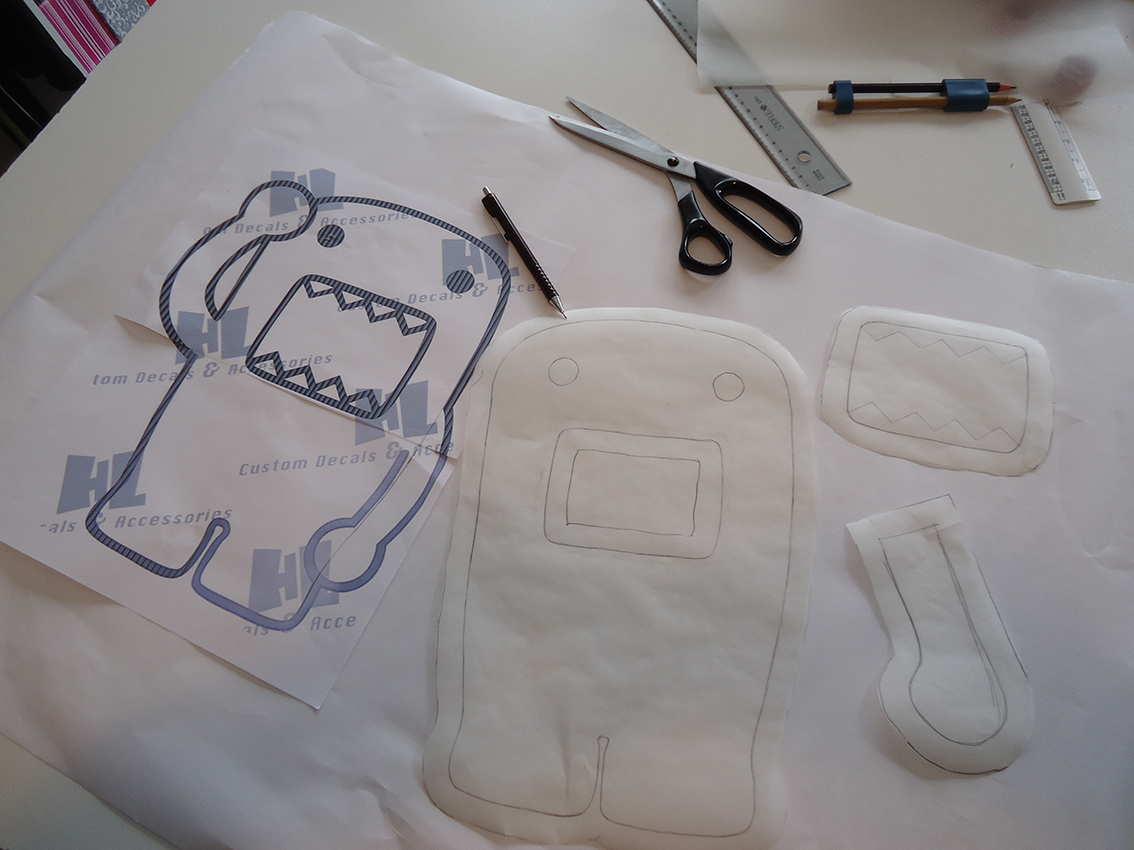 I started with the mouth, attaching white felt triangle teeth to the red felt, then self faced the mouth opening with extra towel. 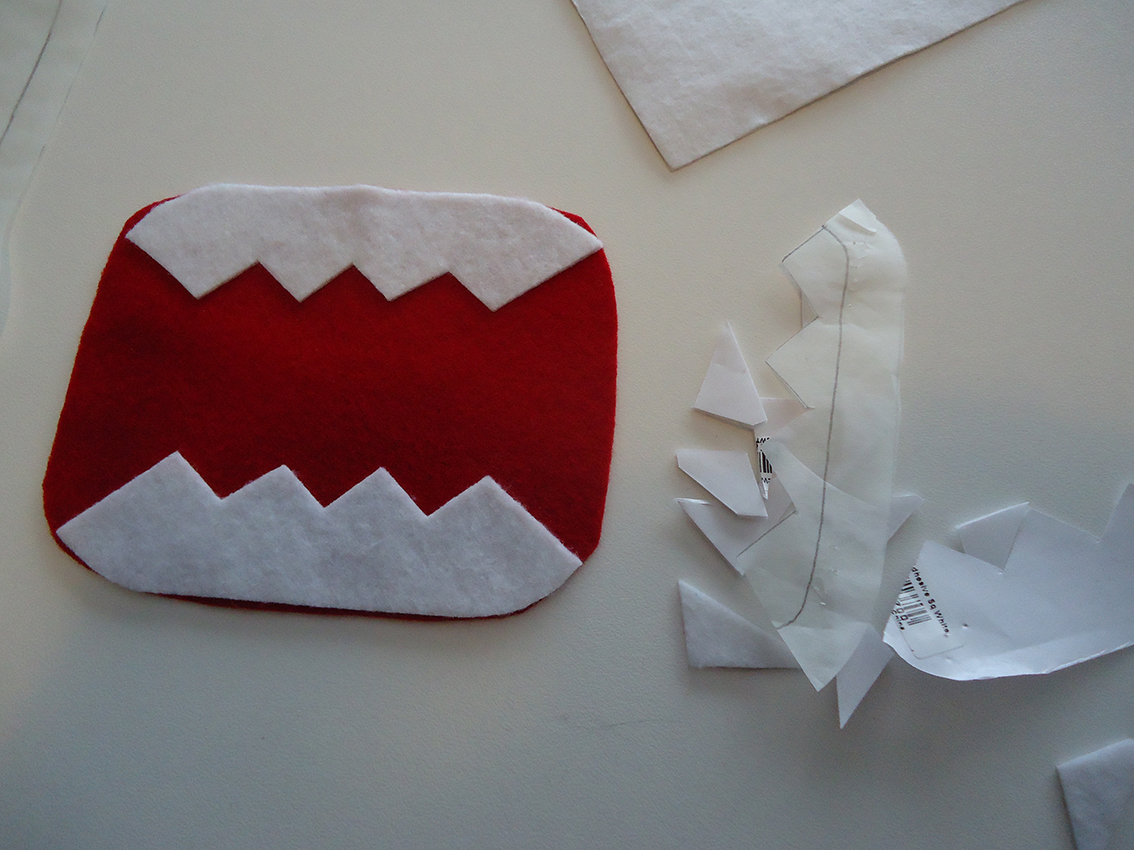 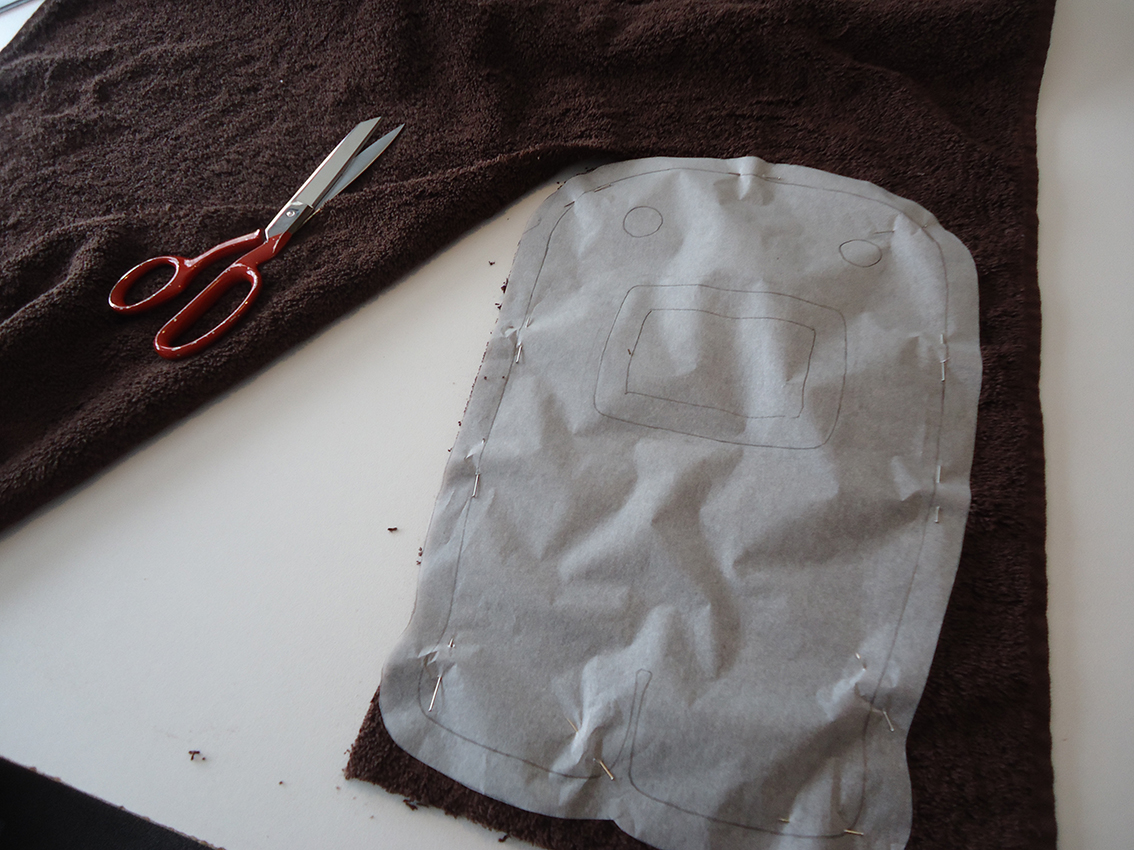 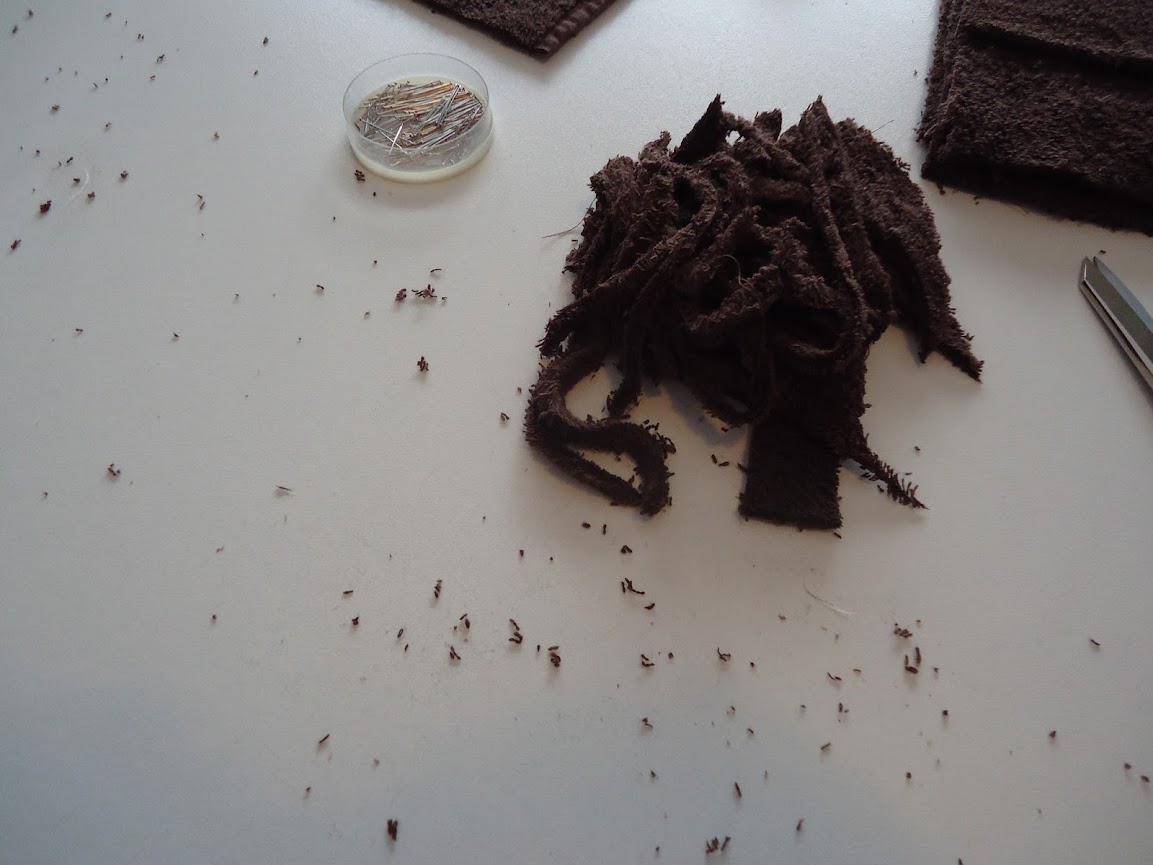 The thickness was an issue to begin with but top-stitching around the opening created a subtle “lip” effect which was actually perfect…I did break two brand new needles doing it.

I added the eyes next, reinforcing them with small squares or towel behind. 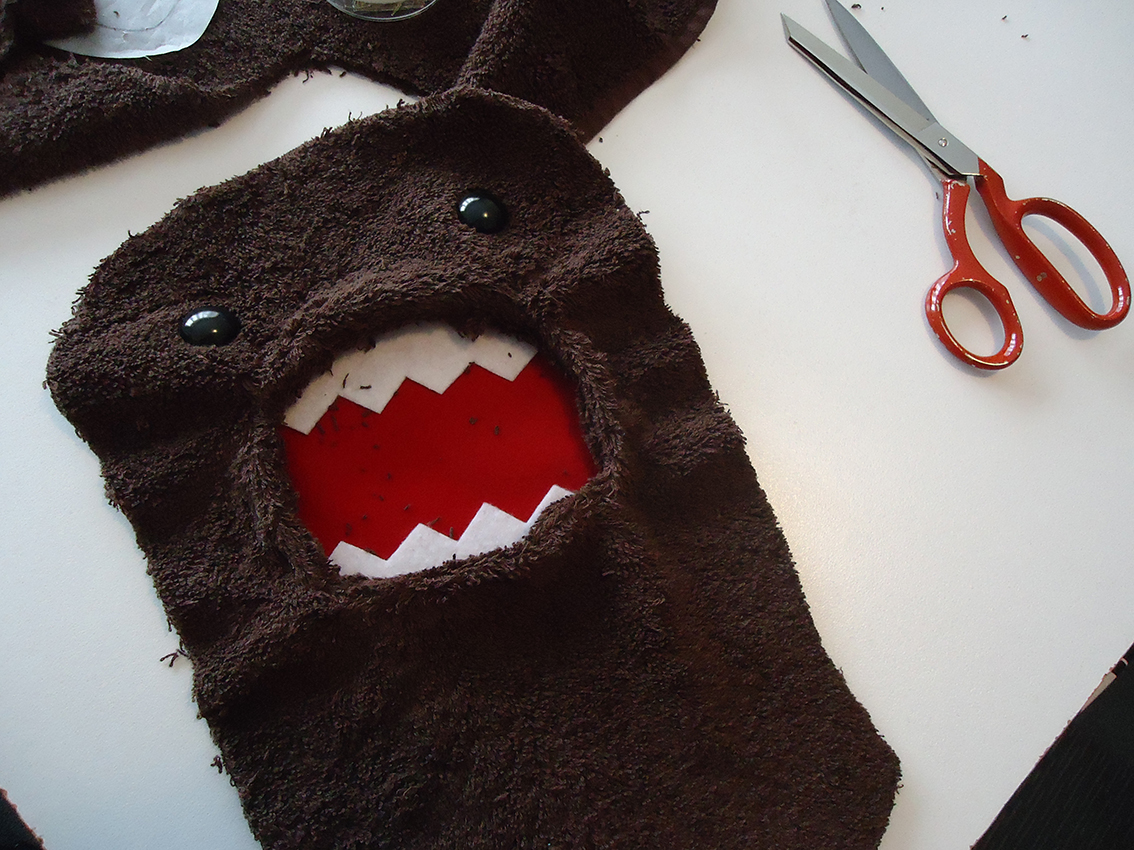 Harri helped a lot as usual. 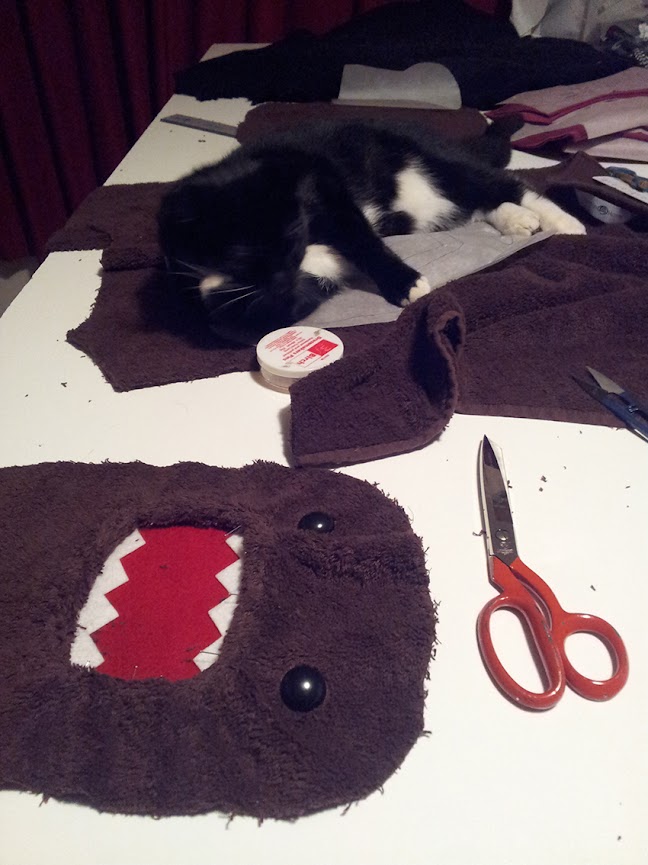 I was initially going to insert the pre-stuffed arms in the front side seam but my accomplice convinced me I had to find a better way so I split the side panels horizontally above and below the arm placement and then split the center portion vertically. 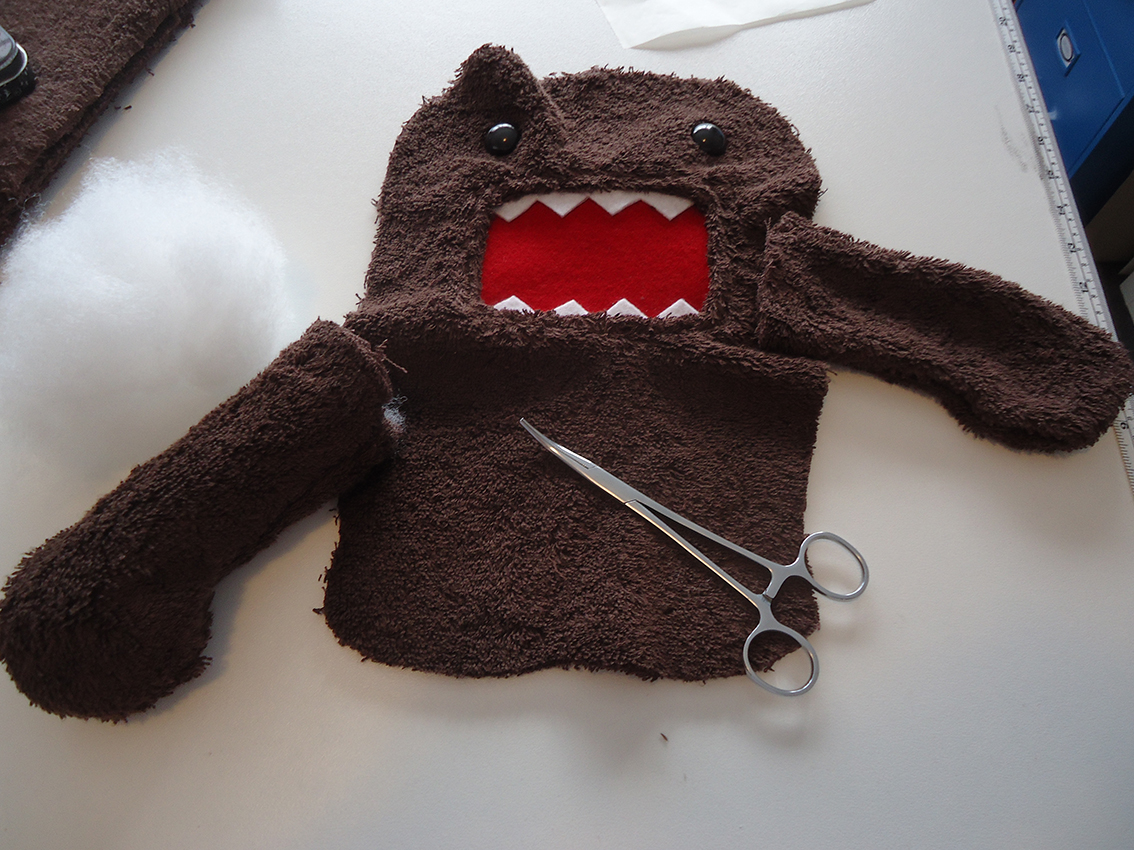 It was a lot of fun to sew all these seams with fully stuffed Doro arms flapping about but in the end it worked really well and made the arms more expressive and posable. 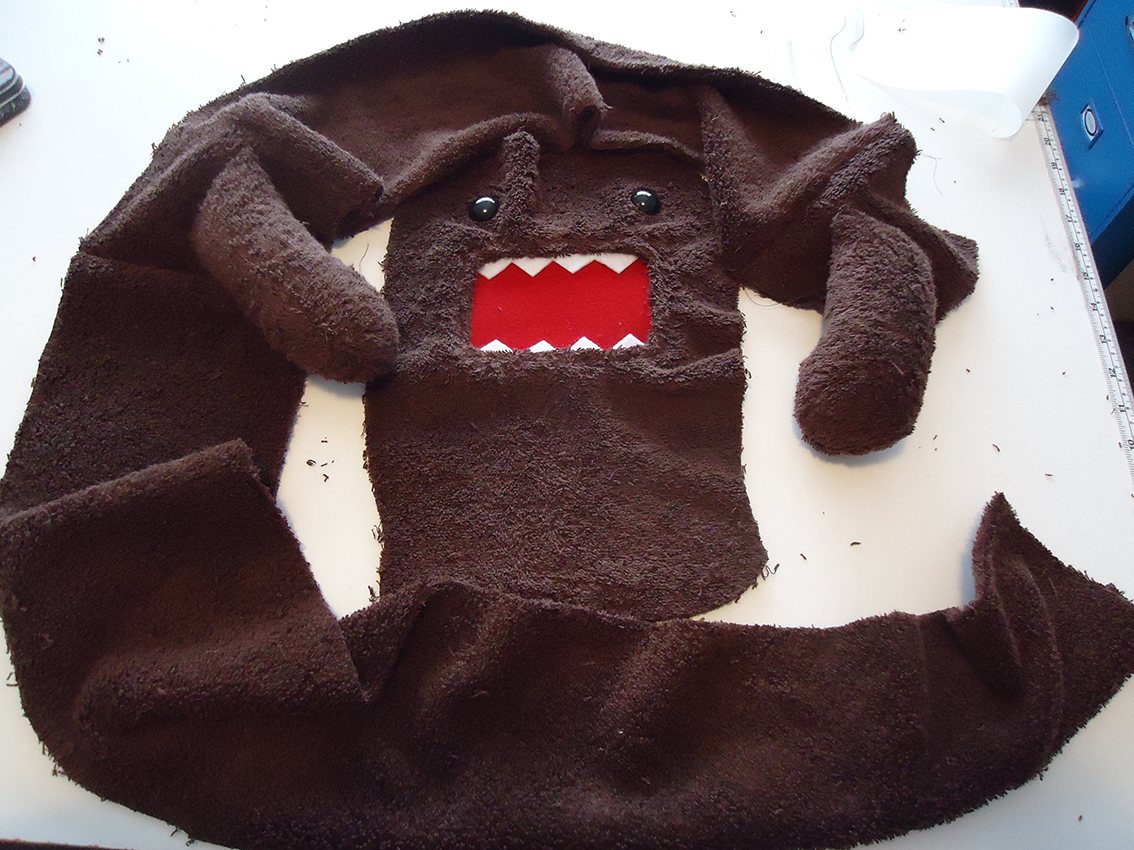 Attaching the sides was really easy except for between the legs where I broke a third needle while trying to maneuver the thick toweling and machine foot in the tight, erm, crotch area. 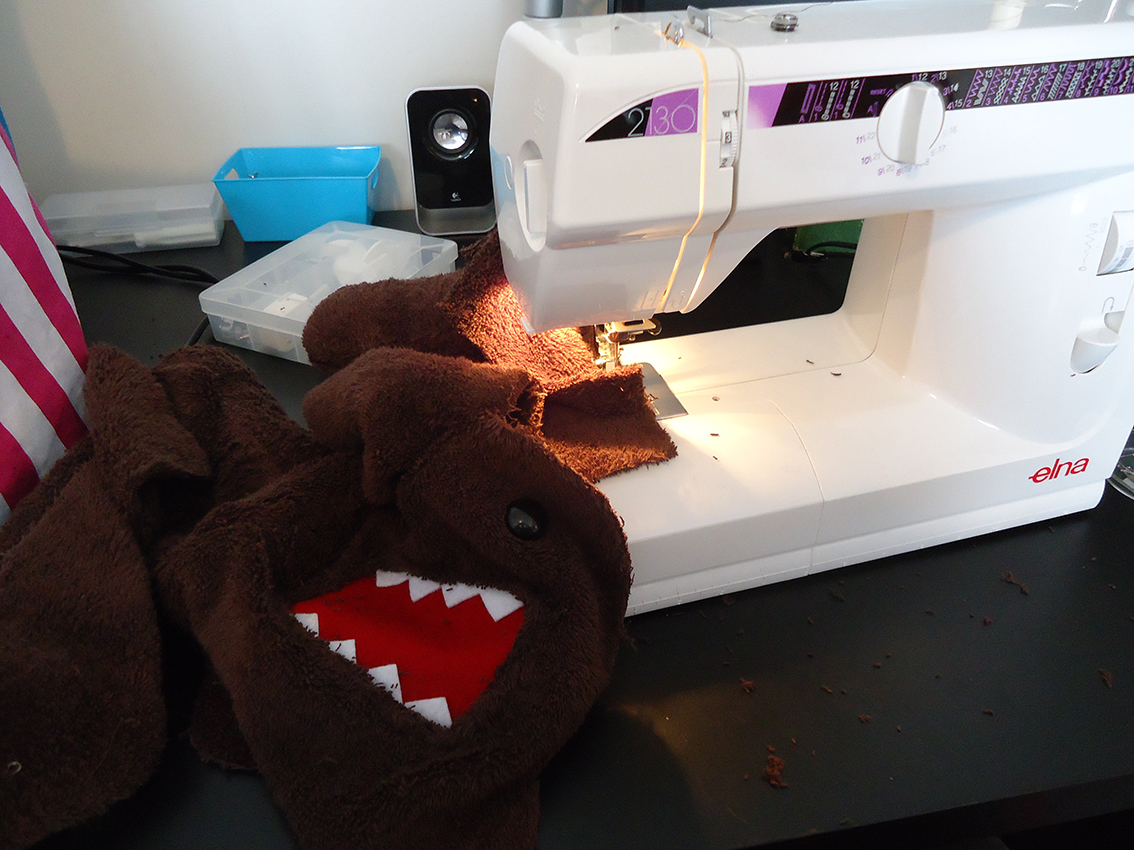 I left a small opening in one side for turning and we were ready to stuff. 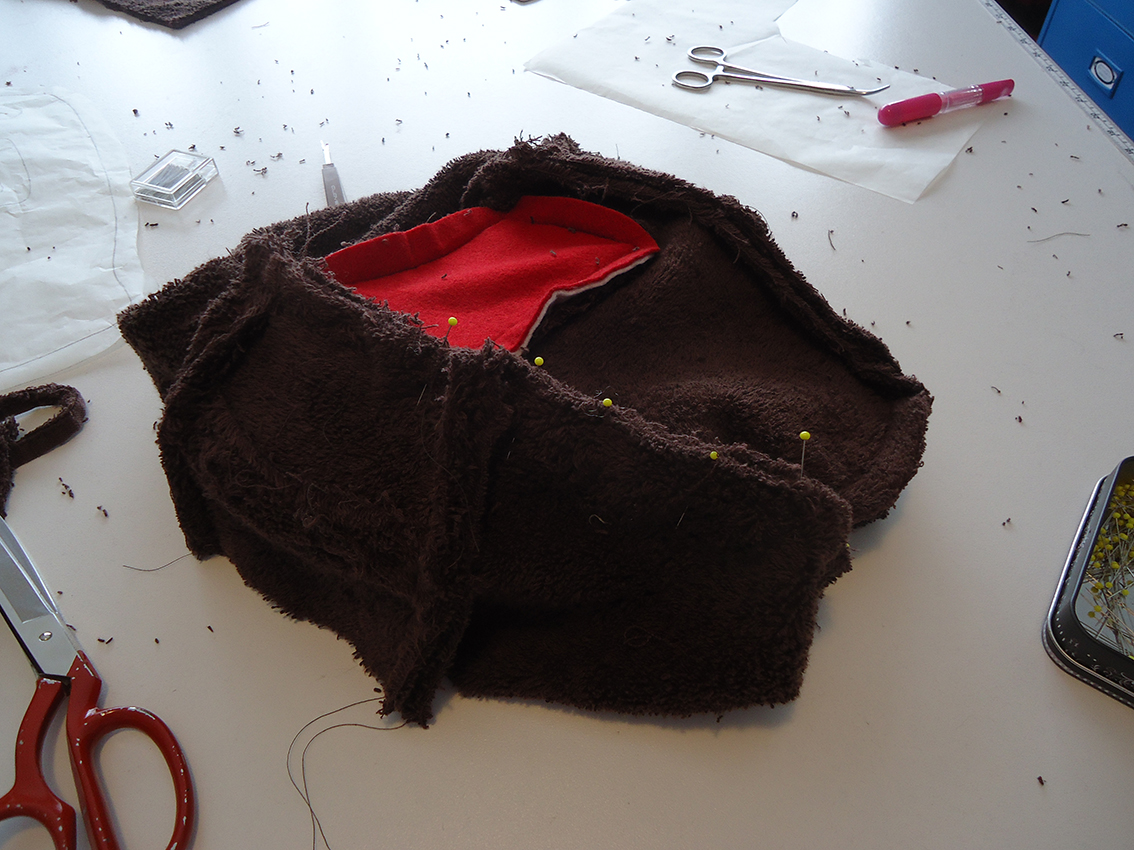 He didn’t look like much after I turned him through but as I began to fill him with his fluffy polyester guts he really began to come alive and my accomplice was getting very excited.

I packed him quite densely so that he could stand up alone and then hand stitched the opening closed. 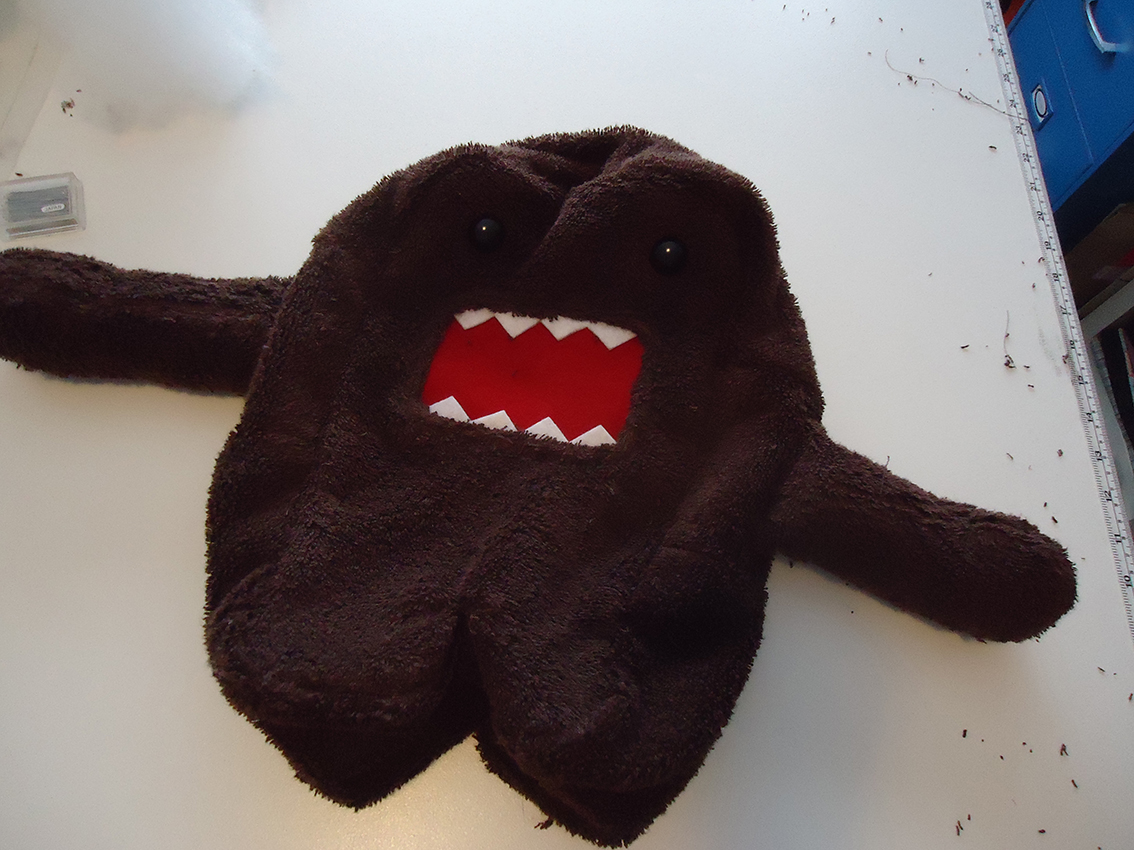 And that’s the story of Domo-kun who is highly prized and, weirdly, of everything I’ve made, is the creation that I have to defend the most. This blog post will hopefully help me convince people with the photographic evidence that I did actually make him! 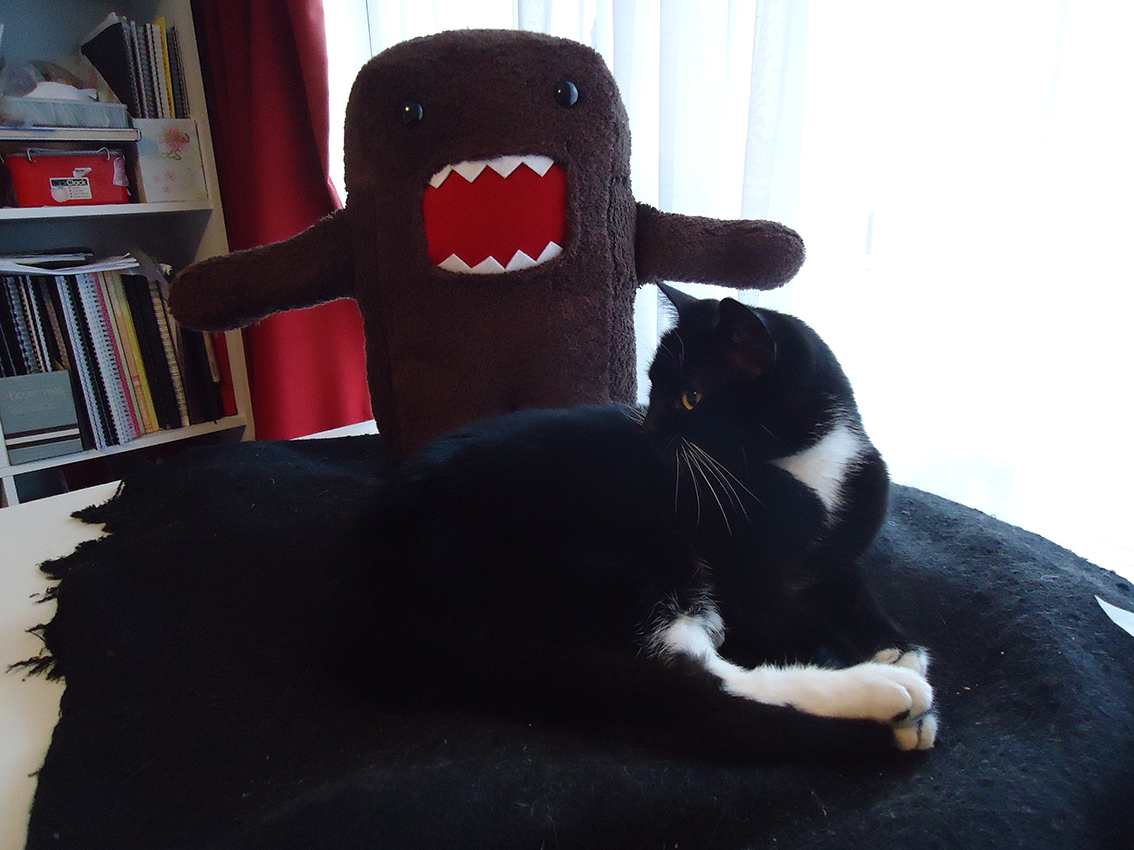