I promised you cake and cake you shall have! Sewing will also follow later in this post.

My nephew Harvey has his first birthday in September 2018 and I was asked to help with food. I offered to make the cake because I had an idea and if I’m helping with something it should at least be fun for me too.

(I’m sure if I didn’t mention it you wouldn’t even notice but please ignore the lack of splash back in my kitchen. I finally chose tiles the following month but of course they had to come from far far away and didn’t arrive until late December. They’re actually being installed as you read this!) 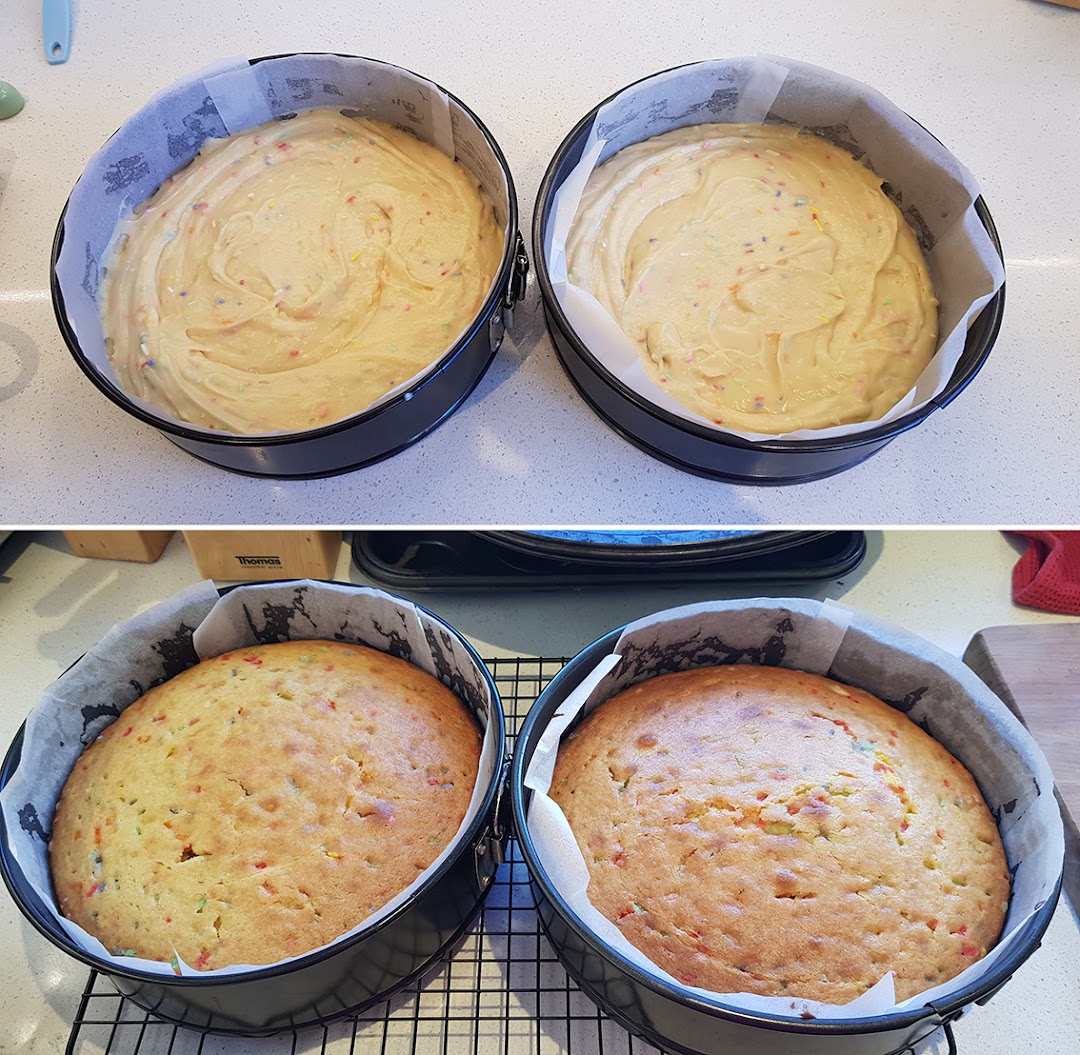 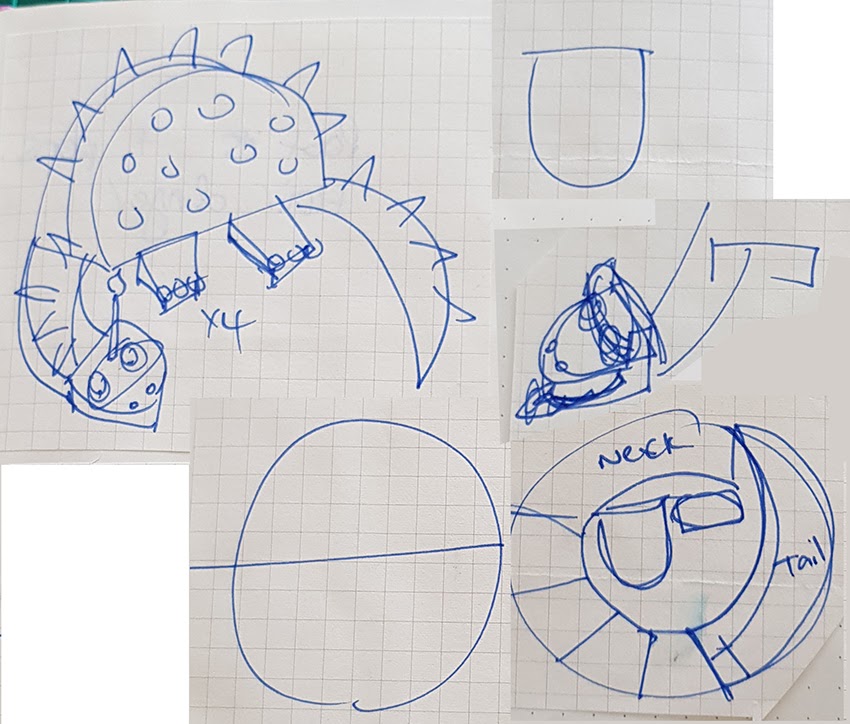 I didn’t really have enough hands to take progress pictures but here it is crumb coated the morning of the party. 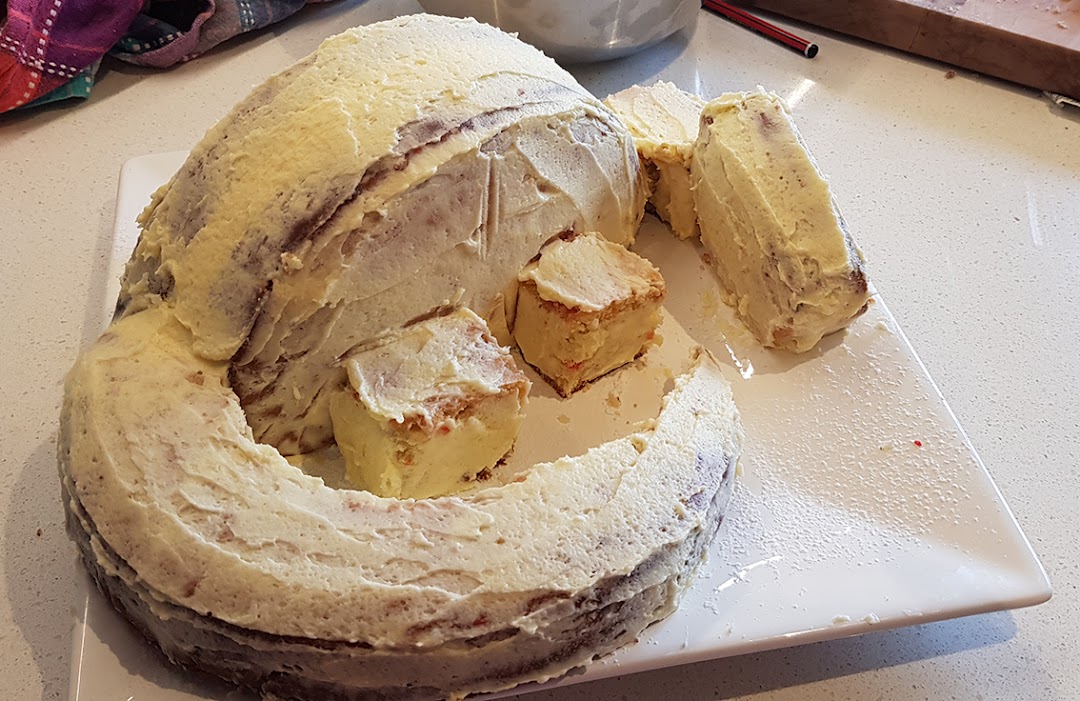 I used the Chelsea Basic Butter Cream Icing recipe for the crumb coat and the final icing. 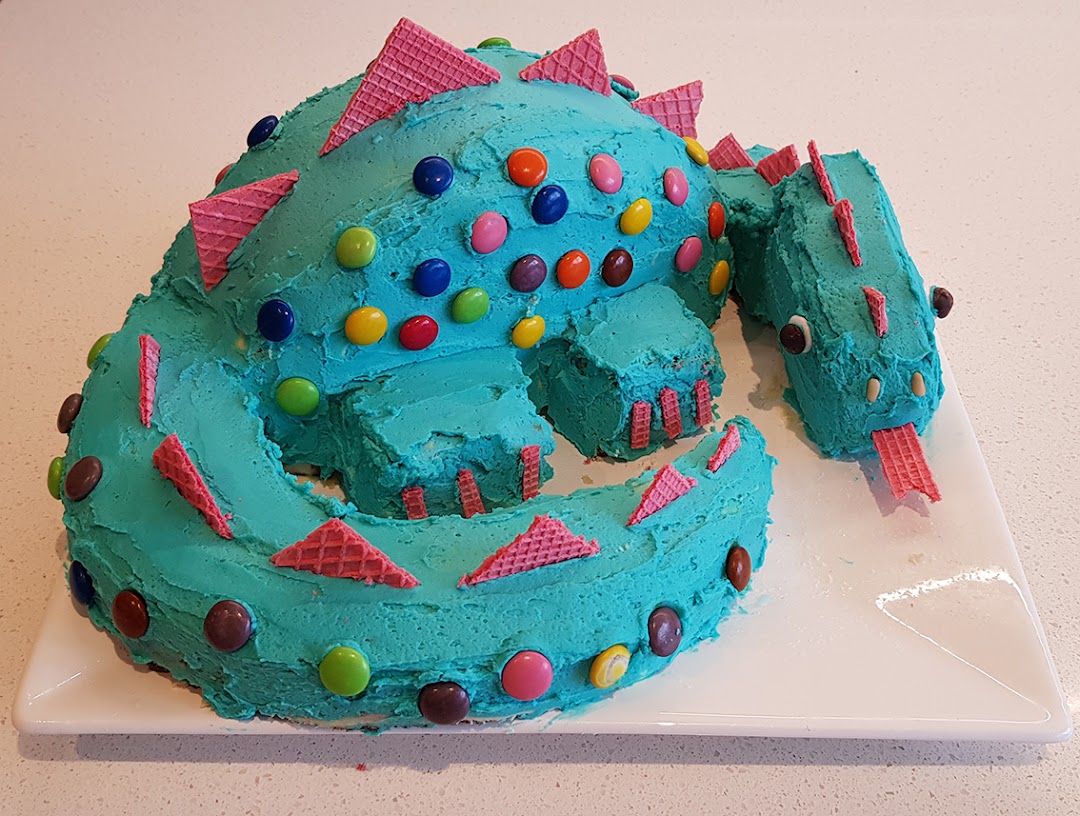 And here it is at the party with all the other food: 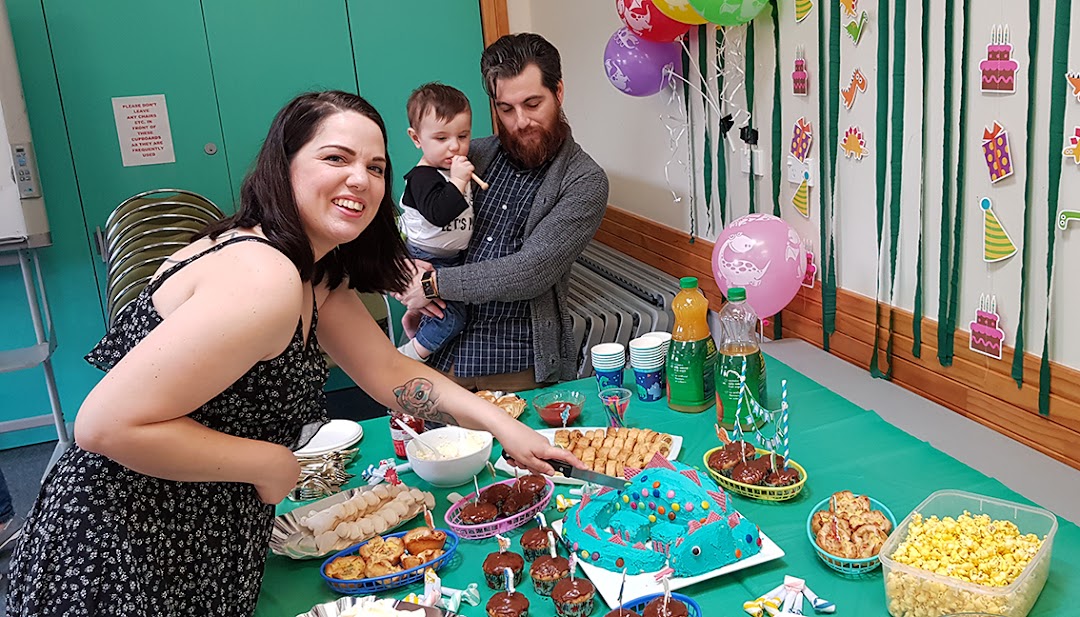 The one year old babies didn’t seem impressed but I was really happy and the adults loved it.

For Christmas 2018 I added to my nephews Christmas decoration collection. To follow on from the cake success I decided a festive dinosaur would be appropriate.

Anything can become festive with the addition of a Santa hat.

My sister said when they opened it on Christmas day H tried to eat it which apparently is a good sign.

Nerdy Husband also liked the festive stegosaurus so our tree got one too.

I made one other decoration for 2018, inspired by this Etsy listing.

Except for the stitching on the dial I think this one is mostly glued together. It felt a bit weird to use glue for a sewing machine ornament so I kind of did my own thing…

Oh and when I said “one more”, I actually meant three…

One for me and one each for two fabulous ladies I know.

I’ve had these tiny wooden cotton reels in my “I don’t know what I’m going to do them but I have to buy them” pile for a while. They were the perfect size.

I did tack the paperclip “needles” and bamboo kebab skewer “thread spools” in place with some glue.

I formed the flywheel around a bit of cardboard and stitched the sides. A large bead helped me attach it with thread.

I didn’t think about the weight of the thread spool so the hangers ended up needing to be under them for the machines to hang level.

They look good on our Christmas trees too!

Fabric –  Felt from my stash

I didn’t achieve everything I wanted this weekend but I did un-bury both my machines!

…and powercords, which are also very important!

It doesn’t look like much but it made me feel MUCH better about pretty much EVERYTHING.

Hrmm…we appear to be lacking quite a lot of fabric…

Nerdy husband and I have decided we have to prioritise getting new carpet for all the bedrooms, the current carpet is very old, full of 24 years worth of pet fur and goodness knows what else (despite numerous cleans) and it’s just not healthy for us. We were prepared for this, we knew when we bought the house that the carpet was bad. The exciting pay-off is that the carpet sits on top of beautiful New Zealand Rimu floor boards so the rest of the house will be taken back to this and polished up. Oh my, it’s going to be gorgeous!

This will happen very soon, I just have to organise myself, but until that time I am reluctant to load my room with too many items as I’ll just have to empty it again when the new carpet goes in. I do intend to have enough in there so that I can sew 😉 This weekend made me realise that my mood has been slowly descending into gloomy territory. We’ve only been in the house 1 week and I’ve felt a bit lost in general.  I’m just impatient. On Saturday I cooked our first “proper” meal, in my kitchen, roast chicken with all the trimmings, it felt so good. I want my sewing room back the same way and I know it’ll feel just as good when I sit down at my table and push the pedal on my Elna for the first time in aaages.

I have a quick project already lined up to get me back in the swing. It doesn’t sound super exciting because it’s home-dec but I’m excited about it. Here’s the background: Nerdy Husband’s interests also include goldfish and he has a nice large tank that has been in storage for 6 years. We have dusted everything off and bought additional supplies and are now looking forward to getting it all set up in our lounge. The tank also has a pretty naff looking pine table that Nerdy Husband made for it to sit on. It’s OK, even Nerdy Husband concedes the naff-ness of this table and has asked me to make a cover for it. I have left over fabric from this ikea-hack-esque project which will go nicely with the couches and ottoman. I’ve already planned how I’m going to tackle it so I just have to do some measuring (and dig out said fabric) and then I’ll get at it later this week…I may also need a couple of zippers…

Now for something completely different: Would you guys pretty-please-with-sugar-on-top vote for my entry in the Bernina Craftsy DIY Weddings Contest? You just have to click on THIS LINK or on the image below and then click on the heart to “heart” me 🙂

Thanks everyone, you guys are awesome xx

Here’s a little bit of sewing as art for your friday:

It looks as if it could actually sew!

This by Jennifer Collier and I love that she re-purposes her materials from thrift stores and lets the found materials feed her inspiration.

She also gets bonus points for using a (real) sewing machine to stitch together some of her work.

You can see more of Jennifer’s work here and here.