I’ve fallen really far behind with taking photos of my completed makes lately. Two dresses and two robes (one of which is my Named Asaka that Nikki has dropped a “subtle” hint about 😉 ) have posts written but no photographs yet.

On top of that I am about to hem a third dress, a fourth (another version of the second dress) is half way done. Dress number five is cut out and yesterday I wore my Lady Skater for the first time in ages and instantly remembered that I needed 3 more of them…sigh…also I may have accidentally bought the new Victory Hannah dress along with 10 of my work colleagues.

My office is really social, we have everything from the usual sports teams (cricket, netball, spontaneous lunchtime mountain biking) to drawing clubs. A brief lunchtime chat revealed an unexpected count of 11 ladies who sewed and 1 who wanted to learn. There was some sort-of-serious joking about staring a sewing club and now 12 of us meet every second Tuesday after work on our mezzanine level to sew.

We may have just found our Sewing Club uniform, or at least a fun group project for the more confident among us to lead the newbies astray and then we’ll see if anyone notices when we all rock up to work on a Wednesday in the same dress…I’m actually not at all sure it will suit me but I’m keen to try it if only for the fact that it’s the most interesting indie pattern I’ve seen for a long time! I already have fabric picked out that I am happy to sacrifice.

This weekend is a long one so maybe I’ll find time to take photos of my outstanding makes but in the mean time I’ve been busy adding to my vintage sewing machine collection. I have several new/old machines to write about and it’s easier to take and edit photos of them instead!

The last machine I wrote about was my Elna One but I’m actually starting with the machine I bought immediately after the Universal Apollo, way back in June of 2013. 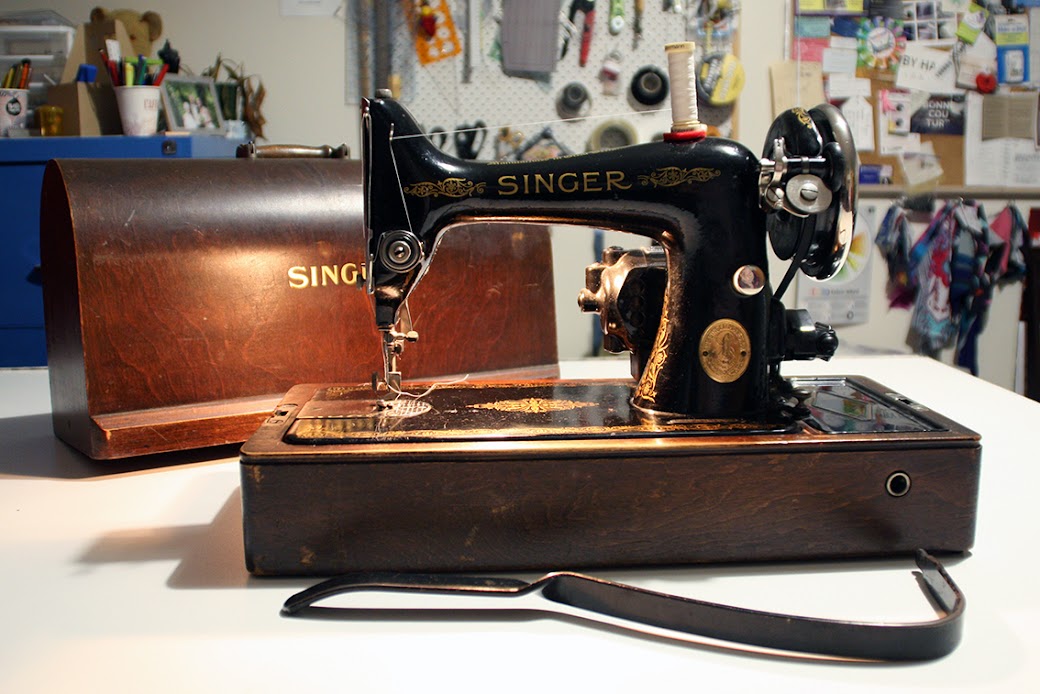 This little 99K-13 came up on TradeMe with two others all from the same seller. A smaller version of the 201K that started this all, I decided one of them must be mine!

They were all in slightly different condition and each came with a different selection of accessories. I thoroughly scrutinised all the photos and ranked them in order of preference. There was a bit of interest but in the end I won my first choice for $36.00.

When it came time for pickup I discovered the seller was my local Mary Potter Hospice so it was doubly nice to see my money going towards a really great charity.

My machine came with the original wooden carry case (and key!) and the knee controller clips nicely inside this case. It also came with the original oil tin and motor lubricant tube and several feet. The instruction book, which is suspect was not originally with this machine, is missing its cover and I also received a book about the motor.

The third book is for a zig-zag attachment (image above) that sadly wasn’t with the machine. I need to find one!

The “K” is for Kilbowie, the factory in Clydebank, Scotland where she was manufactured and the serial number places this in a group of 30 000 machines made in 1946.

She needed a light clean but she sews beautifully. All I needed to do was change out the little rubber bumper on the bobbin winder, the belt was fine.

Permit me a little nerd-out here (jump ahead if it gets too much) – the whole bobbin winder assembly runs off of the balance wheel. The bobbin sits on the spindle, located by a little pin and then you lock the whole mechanism down so that the rubber bumper is against the balance wheel.

A tongue of metal sits against the bobbin and is part of the spring-loaded stop latch that holds it in place. Just like with modern machines you first need to de-clutch (release the stop motion clamp screw) and then you can begin to fill the bobbin. As the bobbin fills and the thread on the bobbin gets thicker it lifts up the metal tongue of the stop latch. When the bobbin is full the tongue is at the right angle to automatically release the catch and the whole mechanism returns to its original position. The rubber bumper is no longer against the balance wheel and so it stops turning.

At the same time there is a threaded section on the spindle turning a toothed disc , called the worm wheel, hehe. On the back of this disc is a raised circular section that sits off-center so acts as a cam. The thread guide sitting beside this has a little extension that is held against the cam on the back of the worm wheel with a spring and works as a kind of cam follower. the cam action moves the thread guide back and forth feeding the top thread onto the bobbin evenly.

It’s only 20 seconds but I could watch this all day long, it is truly delightful.

I recorded this video for a Pecha Kucha style presentation at work. The night before I got home late and still needed to get a video of the bobbin winder. The only camera in the house that could record video AND attach to my tripod had a flat battery, so…

The 99K was made from 1911 until the mid 1950s and the only significant design change during that time was the stitch length adjuster.

My machine has the earliest example, a simple screw in knob with no numbers to indicate stitch length. Later this changed to a lever with an indicating scale of stitches per inch and later they separated the scale out with a little indicator in a slot of its own.

You can also see the bobbin winder design simplifies, the worm wheel and fun little waving thread guide disappears. None of my other machines, modern or vintage, have this feature and they all fill their bobbins evenly. I wonder if this is perhaps due to how modern thread is spooled?

I just think this little machine is really beautiful and so I wanted to share it with you, sorry it took me almost 3 years!

I have some more photos if you are interested, on their own page here.