My sew-jo has been a bit lacking the last two weeks – My brain is fried and I am crawling  slowly towards a much deserved Christmas break.

Here in NZ this is the last week at work for most professionals (a few I know people who  working Monday and some others also Tuesday next week) and we come back around the 6th or 13th of January 2014 –  I’m cheating and coming back on the 21st (because the Monday is Wellington anniversary, yay). Retail obviously still operates and some other industries, but often at reduced hours. Last Christmas I met one of Nerdy Husband’s new work colleagues, freshly arrived from Los Angeles, and he was shocked at how much time everyone has off this time of year, apparently this doesn’t happen in America. I wonder what other countries don’t take a break, is it just Australia and New Zealand? What’s the deal in your country?

My sew-jo will return very shortly, trust me, Santa has something in mind that will help 😉

Therefore, because I have no sewing, I thought I’d update you all on my garden, because I am quite proud of it, here’s where we left off last: 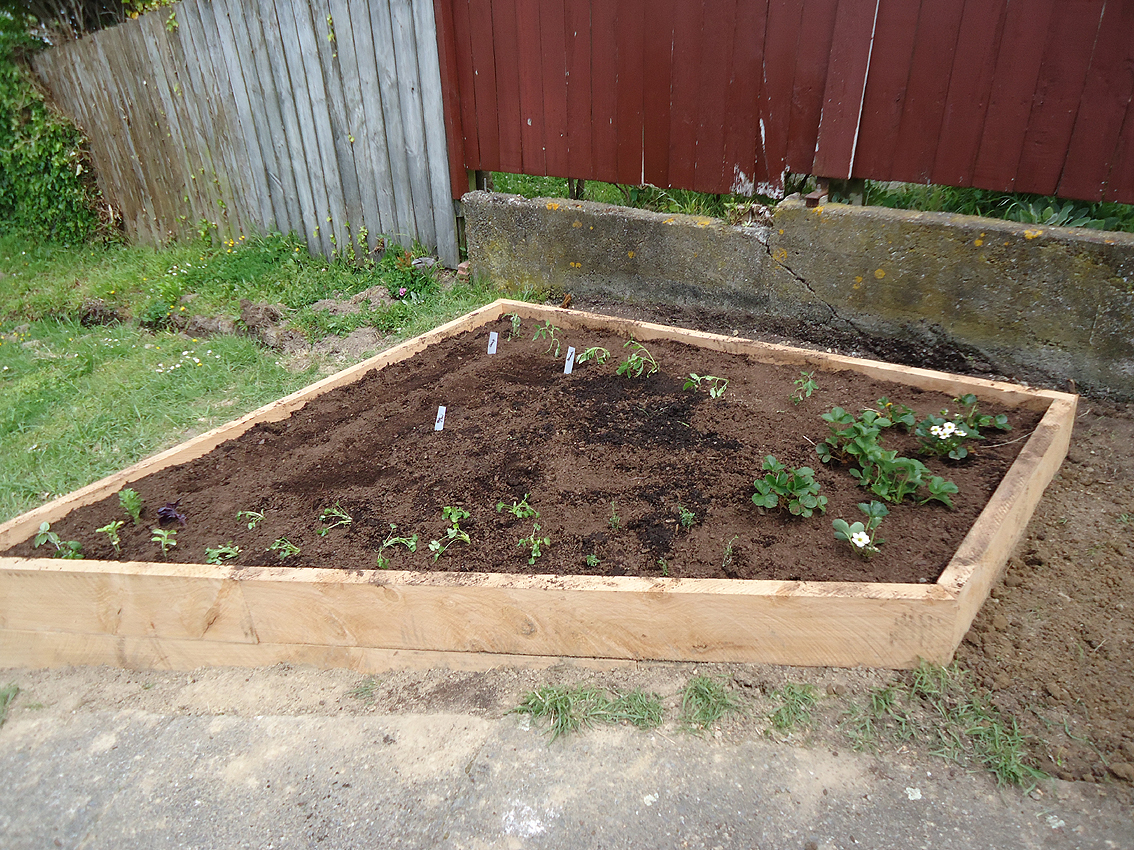 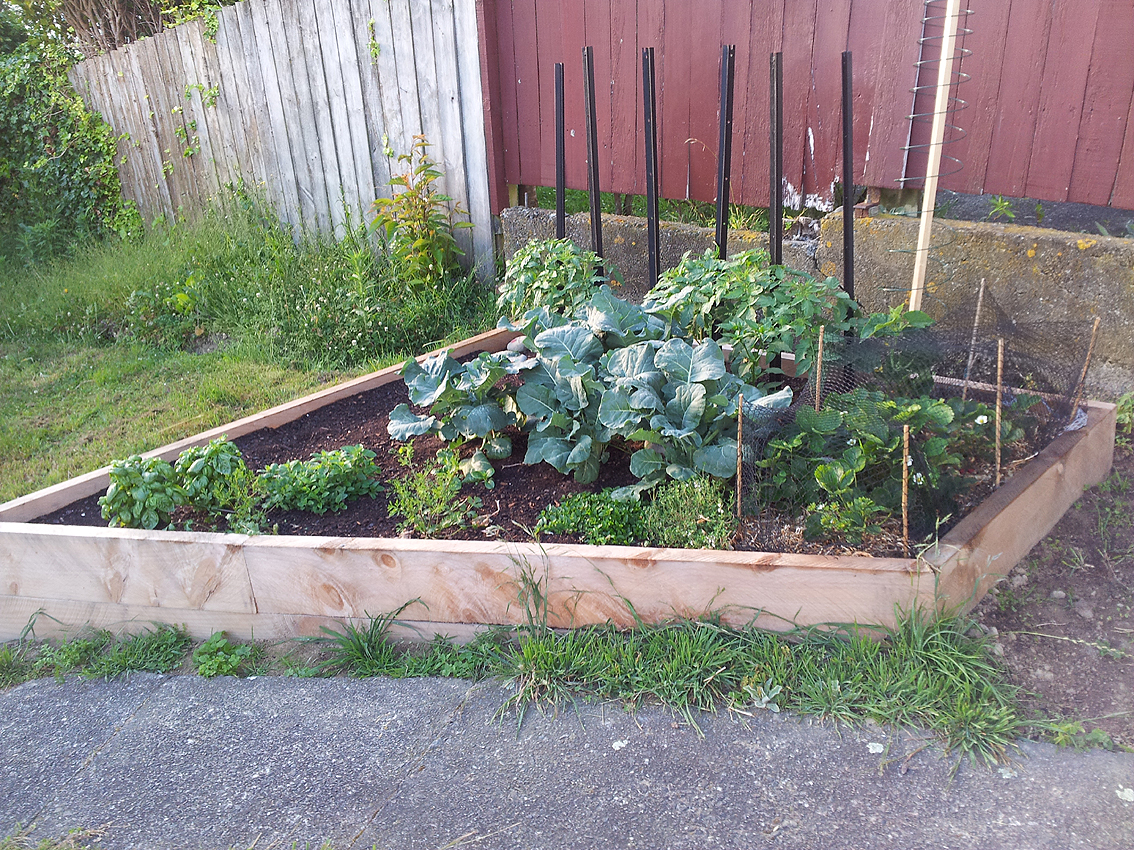 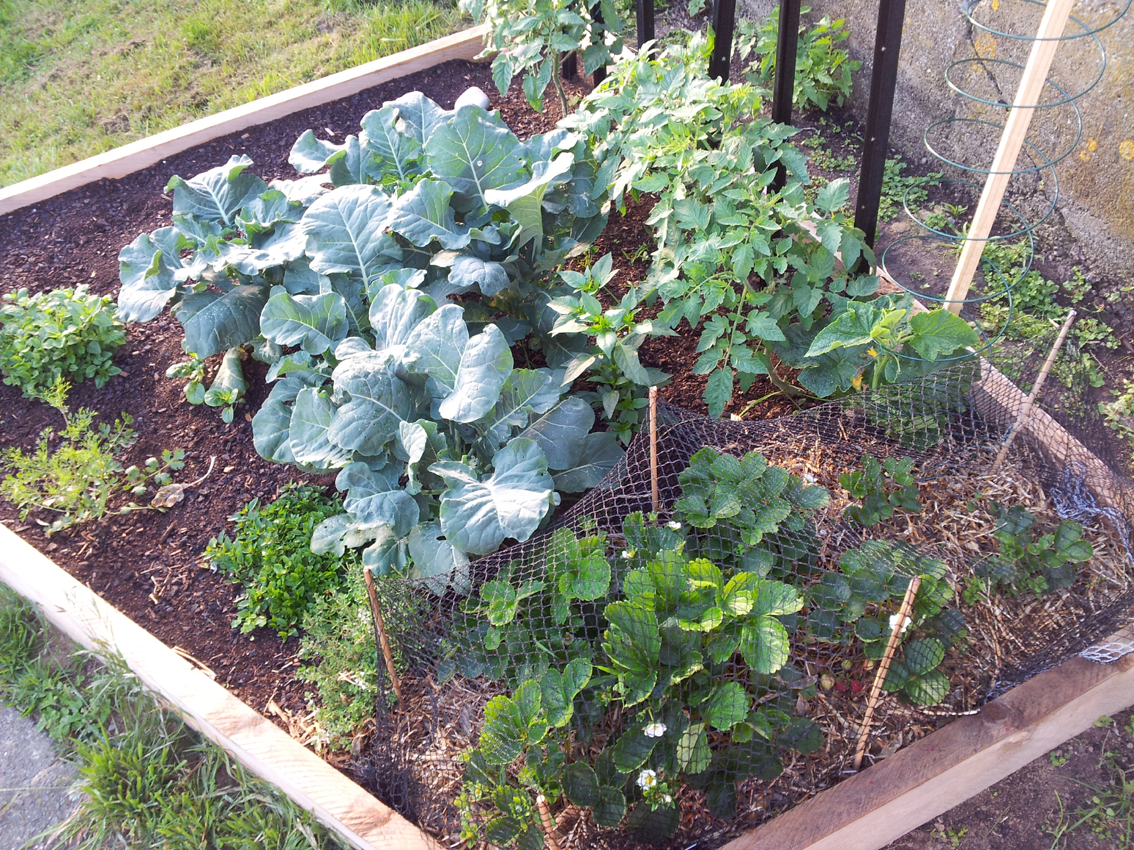 To my herbs, tomatoes and strawberries I have added broccoli, cucumber, chilli and bell pepper. NH bashed in my waratahs to support the tomatoes and I bought this cool expanding spiral thing for the cucumber to climb. 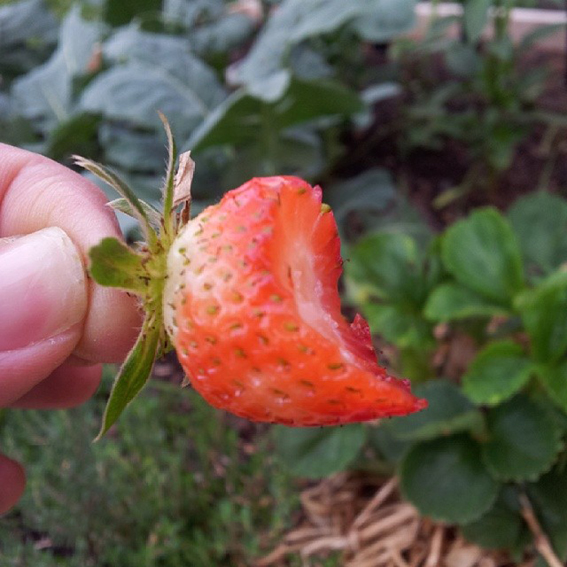 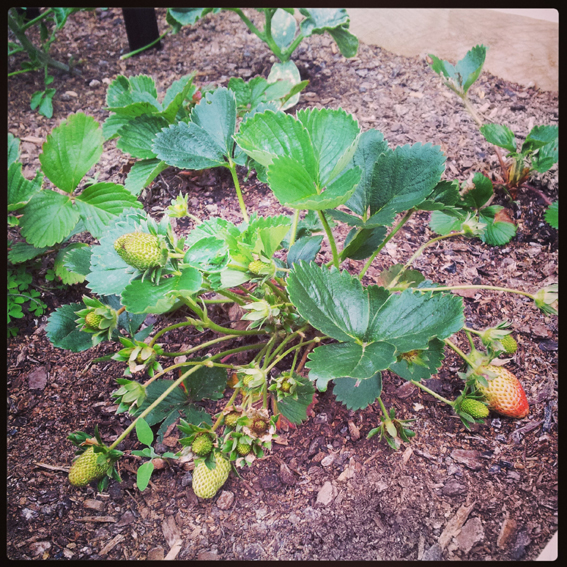 As soon as my strawberries began to fruit the birds were in! I added the netting last weekend as well as pea straw. My herbs are now big enough for regular use and spinach has appeared but for some reason no carrots yet, I suspect last years seeds may be duds. 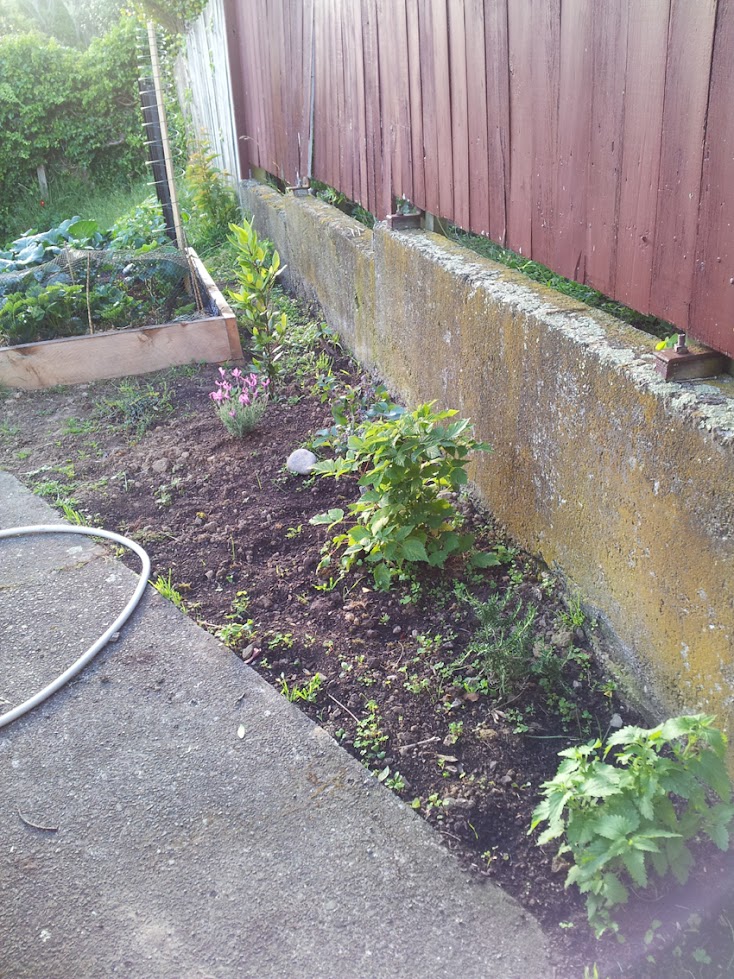 Keeping the rosemary, bay and cranberry company in the side garden I have added a blueberry bush (my choice), a raspberry bush (NH’s choice) and a lavender bush. At the bottom right of this photo you can also see a small cat nip plant. NH slipped this in the trolley while were at Palmers, especially for Harri, who has discovered that “helping” in the garden is just as much fun as “helping” in the sewing studio. Those broccoli leaves are so much fun to hide in and jump out at unsuspecting humans! She rolls on the cat nip (I am surprised it has managed to actually survive her attentions) and munches on the leaves. It doesn’t last long because an insect will fly past and then she is off. Currently her favourite to bring me are ridiculously large cicadas – as in the size of my thumb – I never knew they got that big! 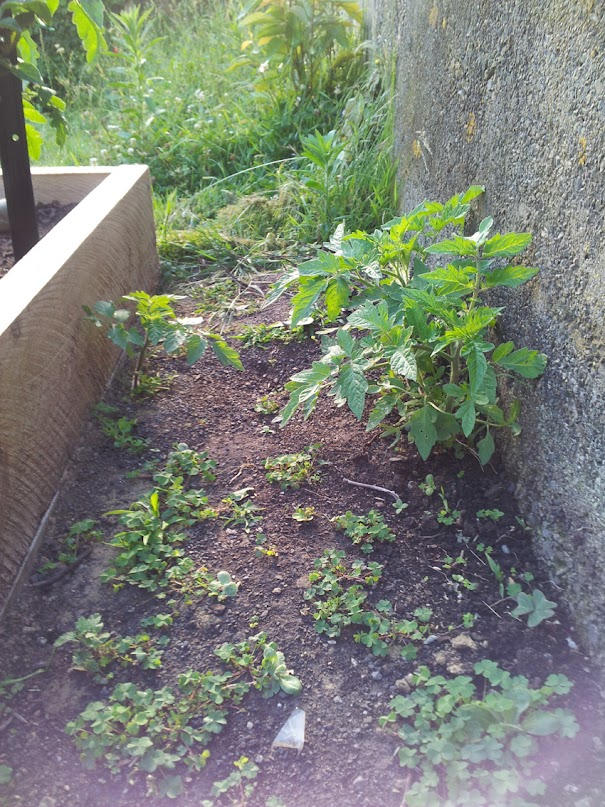 While weeding last weekend I noticed a weed that looked suspiciously like a tomato plant. It was a surprising find given that I never planted any tomato seeds…then I noticed another, and another…and on it went until I had counted 15 rogue tomatoes!

So where did they come from? From last years crop of Moneymakers most likely. You might remember that I spread the dirt from my old bed over this area to smooth it out and I can only guess that some of last years plants dropped tomatoes that broke down and left their seeds dormant until this year. I’m really excited about my accidental find! I relocated a few plants for me and potted the rest to give away to family and friends. 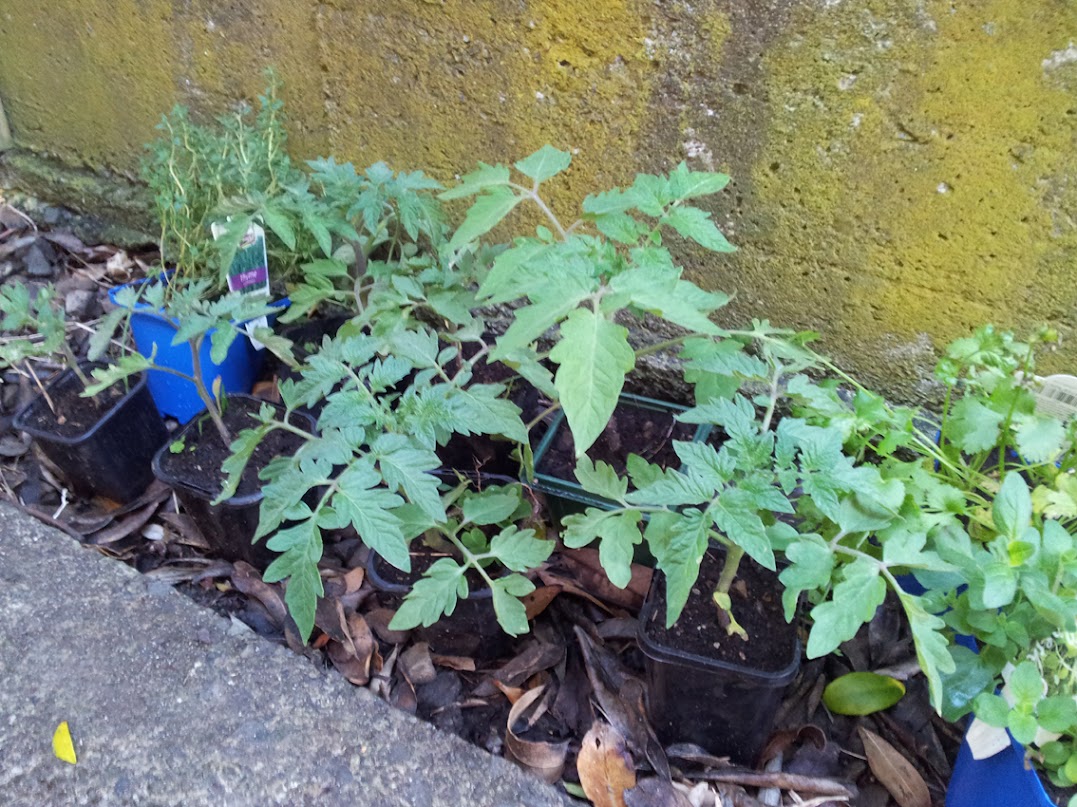 This year I bought Beefeater tomatoes so now I have two varieties and I think at the end of the season I will try to keep some seeds and have a go at growing BOTH next year – If I can do it accidentally it can’t be that difficult right?! 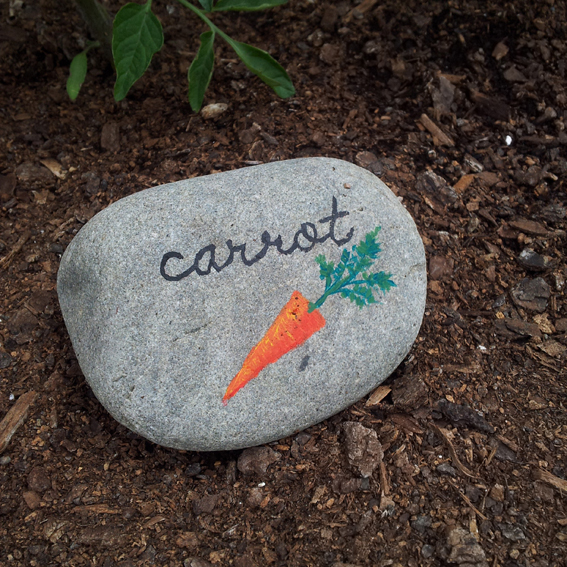 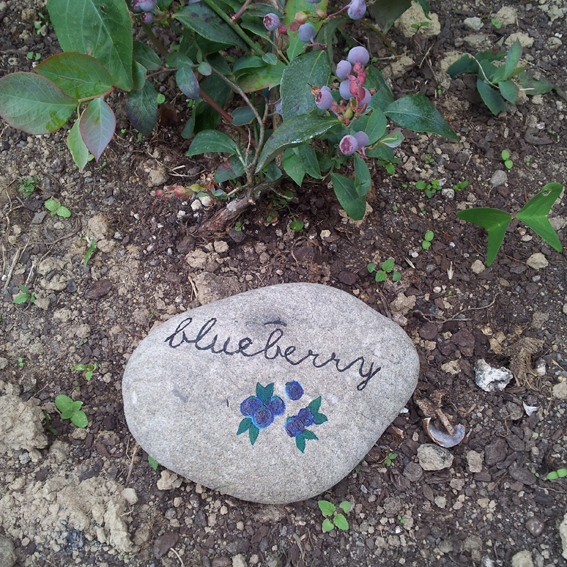 Another addition to my garden has been plant markers. Finally! It took me ages to decide what I wanted to do, initially I was thinking about buying some old spoons to hammer flat and letter punch but then I saw some painted rocks online somewhere and was sold. One weekend while out and about I convinced Geologist Husband to help me appropriate some. I cleaned each stone thoroughly and then painted my text and image using acrylic paint. I’ve made about 6 and have quite a few more to go but I’ll get there 🙂 On the weekend Nerdy Husband roped me into some demolition work.

However, to be fair, after a couple of swings of the hammer I didn’t need much more encouragement to stay and help.

And also tiring, so not much sewing to report but I did manage to get a pattern traced off for the requested rugby shirt.

Nerdy Hubby has mentioned it at least 5 times so I thought I better show some progress.

I traced off a polo shirt pattern from an old Burda magazine, May 2007 I think, it’s one of those rare issues where they threw in some decent men’s patterns. I’ll be comparing this pattern to his favourite rtw rugby shirt and adjust it to suit.

I am trying to get back into the habit of doing a little bit of sewing each evening, it’s easy now that I can just pop into my room. Tonight I plan to get the sleeves onto the Simplicity 2364 top I am making – here is a sneak peak I posted pre-move.

I have completely lost the entire pattern and instructions somewhere, I am confident they will show up eventually, like a lot of other things I thought I “lost” after unpacking – a magazine box of Burda magazines and an entire pre-cut project to name just two. Not having something like instructions hasn’t stopped me in the past but it is annoying, I quite like that pattern!

Before the demolitioning I got my herb seedlings & seeds planted:

I started on Saturday morning by planting my tomato plants across the back.

After being bundled together for a couple of days supporting each other a few of them packed a sad around lunchtime and decided to recline on the dirt:

They started to pick up later in the day and I hoped that the fence would protect them from the wind while their stems strengthen and thicken up. It sort of worked but typical Wellington, after I planted these on a calm Saturday the wind picked up over night and on Sunday it was quite gusty. These poor little guys were flopping all over the place! Lucky I found some bamboo stakes in our cupboard of randomness and I tied them up which helped a lot! Our back yard is pretty sheltered but if it becomes a huge problem I am already planning a small wind break.

This boring gap is a row of carrots & two rows of spinach seeds:

And here are my herbs!

My temporary plant markers are made from a cut up yoghurt pot. I couldn’t bring myself to pay real money for the ones in the shop so I improvised. Later I will make a more permanent solution. I am thinking either flattened spoons with punched letters like these (would mean finding or buying metal letter punches which are exxy!) or maybe painted rocks like this (appeals to the arty side of me).

To finish up I planted some seeds for later transplant, they’re not very exciting yet but you know…

Celery, Leek, Pak Choi + Beans that I got on a whim while at Bunnings:

I bought the $4 seed raising trays as opposed to the $12 trays. Apparently the $8 cost saving means my lids are less wind resistant, so masking tape it is.

I didn’t promise this would be glamorous 😉

But look at them all nice and steamy and germinating! Well I hope, I have no idea how long any of these seeds will take to sprout! 🙂 I should probably read the rest of the seed packet, after the bit about “plant into trays early spring”, I get points for enthusiasm though, right? I am guessing the beans will be up first so it might have been a mistake to plant them with the others, oh well, that’s just part of the fun.