I wrote an entire post about my amazing Secret Santa gift and do you think I can find it? I don’t know what happened but I suspect it is inside a Word document on my computer at work, so I’ll start again:

But first! My BurdaStyle Blouse was returned to me, yay! I took a few photos on Scarlett, it’s really hard to capture the different chiffon purples and textures and I think Scarlett being super red doesn’t help much 😉 Click on the picture below to see more on BurdaStyle.

If you are interested, here are the other sketches I submitted:

Right, back to the Secret Santa. Now just in case Secret Santa isn’t the universally understood concept that I image it to be, let me first explain. At some work places (and in some large families too!) everyone’s names get put into a hat and then you each draw a name out. The person you draw is who you will buy a Secret Santa gift for. There is usually a price limit set and you are meant to keep a secret who you are buying for. Gifts are generally humorous involving some inside joke and often include chocolate or other sweet to soften any accidental offence.

For example: I pulled R’s name from our hat (actually, that’s a lie, I was last and pulled my own out of the hat so I swapped with J, that’s how came to I know she had me…but everyone worked out who had who eventually anyway, it’s not that difficult when you consider there are only 6 of us), but back to R, he can never find his calculator, so he’s always borrowing someone else’s, if your calculator is missing, go check R’s desk…so I bought R the biggest calculator the internet could find for me, it’s A4 and has a huge display and really large buttons. It looks like this, except that it is blue:

So J was my Secret Santa and she knows that I sew, having a Secret Santa that knows a little bit about you is always a bonus. Also, because I also have most of my eBay/TradeMe purchases sent to work, J knows about my new secret obsession, which is about to become less than secret now that I am telling all of you 😉 I like miniature sewing machines, as in doll house scale. This is mostly because I wish I had room for more real sewing machines, vintage ones and the like, but also because they just so darn cute!! 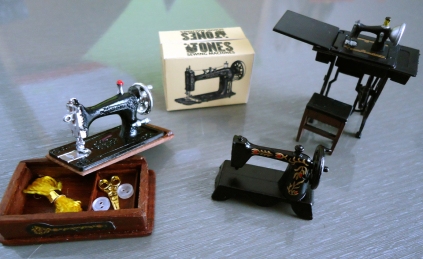 Ok, so three, plus a box, hardly constitutes an “obsession” but the danger is there, in fact I am already thinking about jumping on eBay now to see what others are out there for a reasonable price.

Anyway, can you believe what J found for my Secret Santa gift? 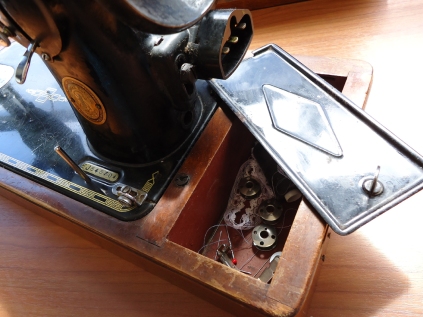 I am completely and totally in love with it!

Ok, so it doesn’t work, hence her being able to keep to our Secret Santa budget, but I have the list of things that are wrong and it is short and possibly DIY-able but for now I am content for it to grace my sewing room as is. 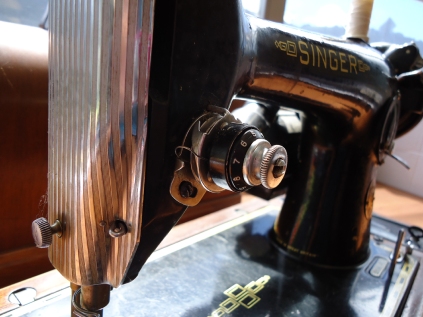 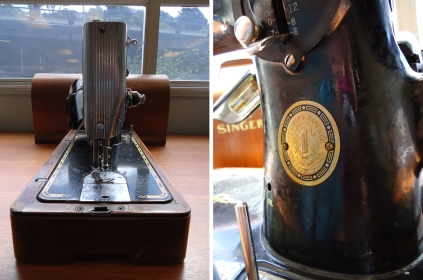 So it’s a Singer, obviously, would anyone care to try and enlighten me with a model number? There are plenty of these (or similar) in NZ, my Mum has one variation, so does my Nana and Mother-in-Law but this one appears to be before they began to stamp model numbers on them. The closest image I can find online is for a 15-91, but I think that might be the treadle model, any ideas? There are plenty of downloadable manuals online but I really need a model number first.

The weather is pretty awful today, after almost a full week of amazing sunshine an ex-tropical cyclone has decided to leave harassing the East Coast of Australia alone and park itself over central New Zealand instead. 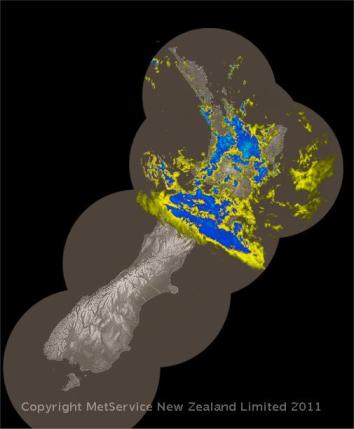 So today is most definitely a sewing day, so what’s on the sewing table right now? The Forever (and ever) Jeans, I know, I can scarcely believe it myself.