Every now and again Nerdy Husband likes to throw me a sewing curve ball. It’s always a good challenge and I truly appreciate his confidence in my sewing abilities.

But first, I realised while drafting up this post, that the NRHS Merino Top is not the first thing I have sewn for NH in recent times. I made a suit jacket for him once, it wasn’t what I would call 100% successful but it was great for me in terms of stepping up my technical sewing skills. It deserves a post all of its own and so it shall have it, at a later date.

The previous RNHS has all revolved around bicycles. Once I was asked to sew some velcro to an old rubber bicycle tube to make a chain stay protector for the shiny and newly re-painted Big Red Bike*. 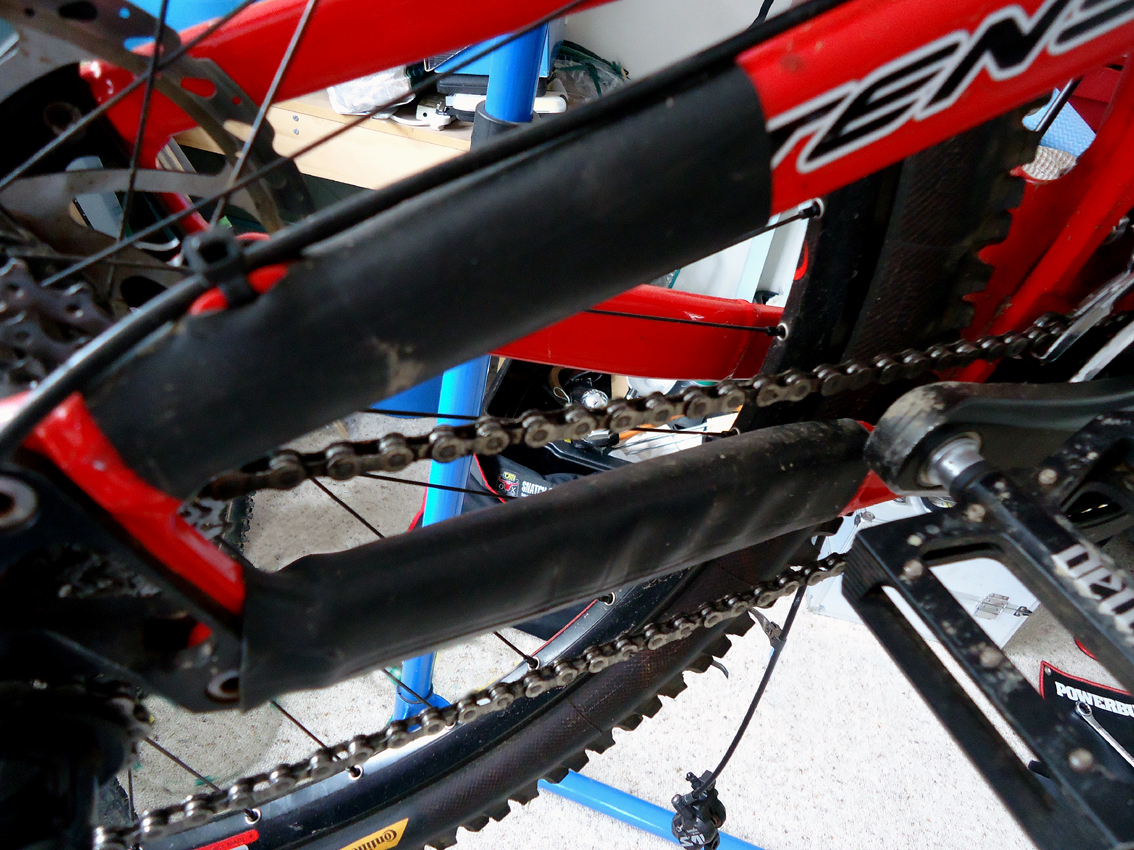 In the end I made two, my poor little Elna grumbling the whole way, I am ashamed to say it, but she gives as good as she gets and she gets looked after really well. For a “modern” machine, all plasticy, she takes a fair beating and keeps on sewing.

The next request was much easier, a workshop apron, to protect his clothing but also to keep tools handy.

I based it on my basic apron pattern with a few extra pockets and dividing stitch lines for various tools. It also has an adjustable clip for the waist strap, something about boys being unable to tie bows behind their backs, it’s not in their genetic coding I think. 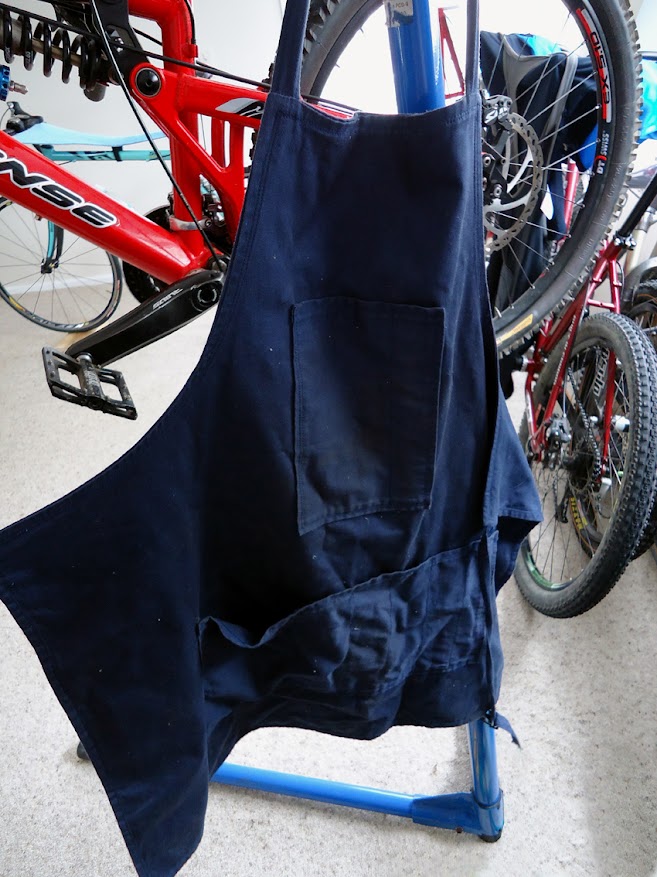 He uses it a lot, as you can see from the state of it. I offered to wash it once…

So fast forward to a few days after Christmas 2012: Downstairs in the Mannex (or Man Cave, if you prefer) Nerdy Husband has his Pretty Green Bike* set up on the stationary trainer for indoor bicycling. After a particularly sweaty indoor training session he calls to me from the shower.

The best ideas always happen in the shower don’t you think?

“I have a really strange sewing request. It’s kind of hard to explain, I need to draw it at the same time…”

So after he is dressed we go to my room and he makes a scribble. 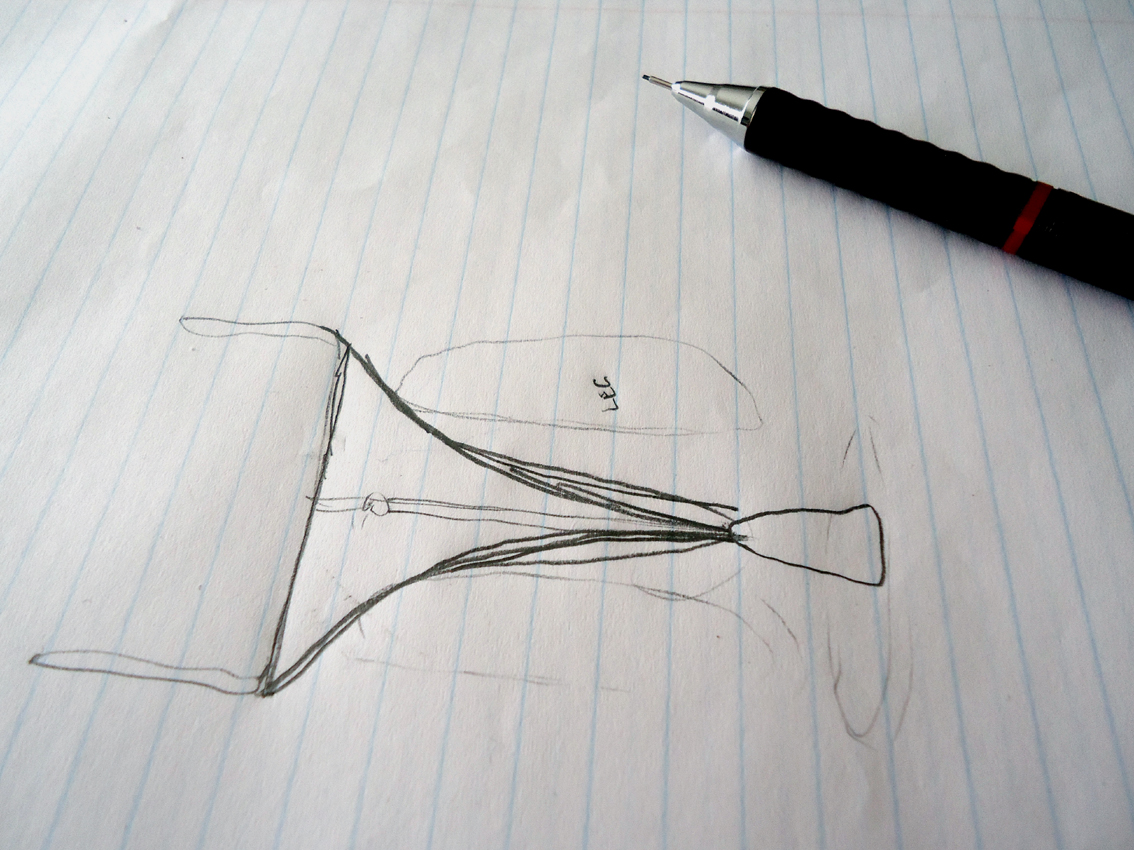 It’s a sweat bib thingee that will span between the handle bars and saddle and protects the paint and componentry from the acidic nature of perspiration. NH assures me these things do exist in bike shops and back in the Mannex, with some pattern paper and a tape measure, he points out some of the areas on his bike that are already suffering a small amount of corrosion and attempts to explain the concept a bit better.

The idea is that the bib will float above the top tube so as not to transfer the sweat to the paint and should run the whole length but still allow the rider to grip the handle bars comfortably. It is wide at the handle bars to cover the front brake and cables below, then it curves in to a sort of “T” shape as it runs down the top tube so as not chaff as the legs move past it.

The mass produced versions are obviously made as one-size-fits-all attached with elastic or long straps of velcro. This can mean, on a larger bike, that parts of the frame are left exposed. Variation in leg length may also mean a seating position that causes your knees to brush past the protector which is really annoying and will also cause chaffing.

So the mission was to make a custom version to suit the Pretty Green Bike’s frame.

We started with the paper pattern, roughly sketched while masking taped to the bike and then mirrored on the fold. The shop versions are often stretchy but we decided an old towel would do for the first attempt. 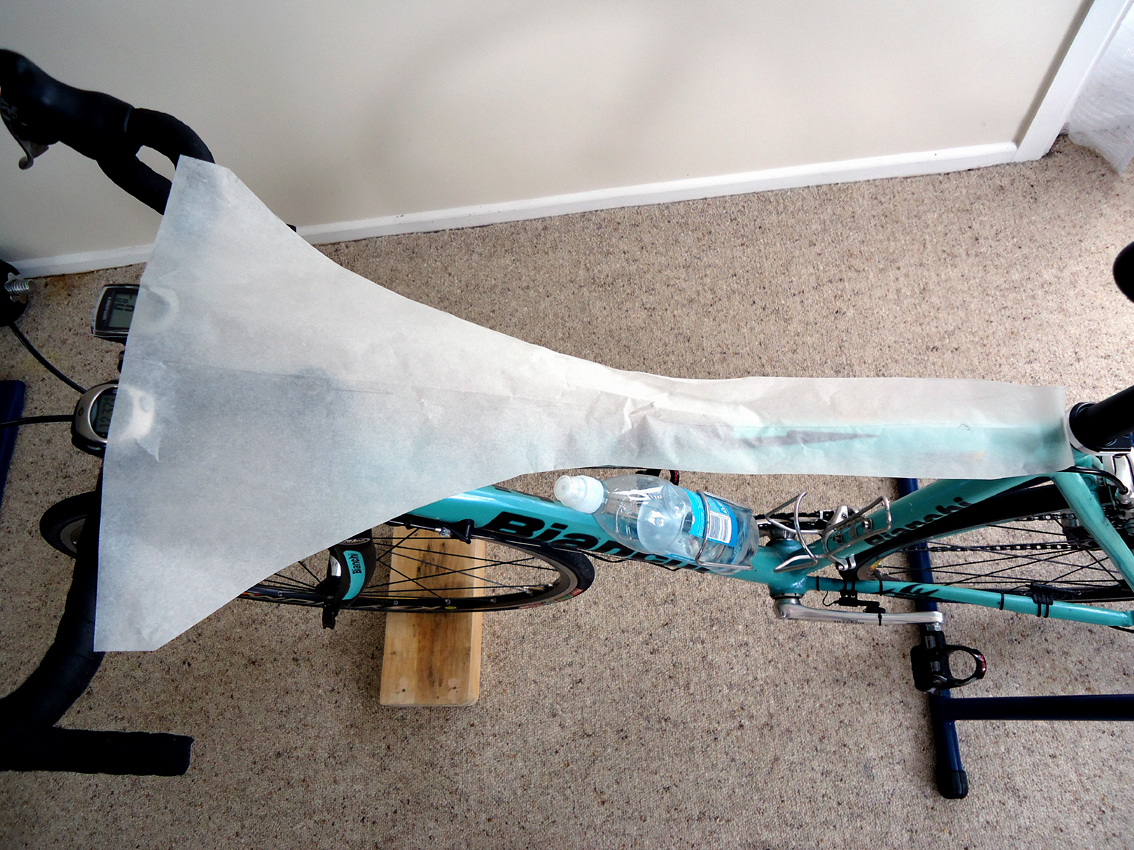 I also decided to use velcro instead of elastic because I thought it would be easier to remove, I am assuming it will need washing, and I am also already assuming that if this works there will be an additional order placed for a second one! 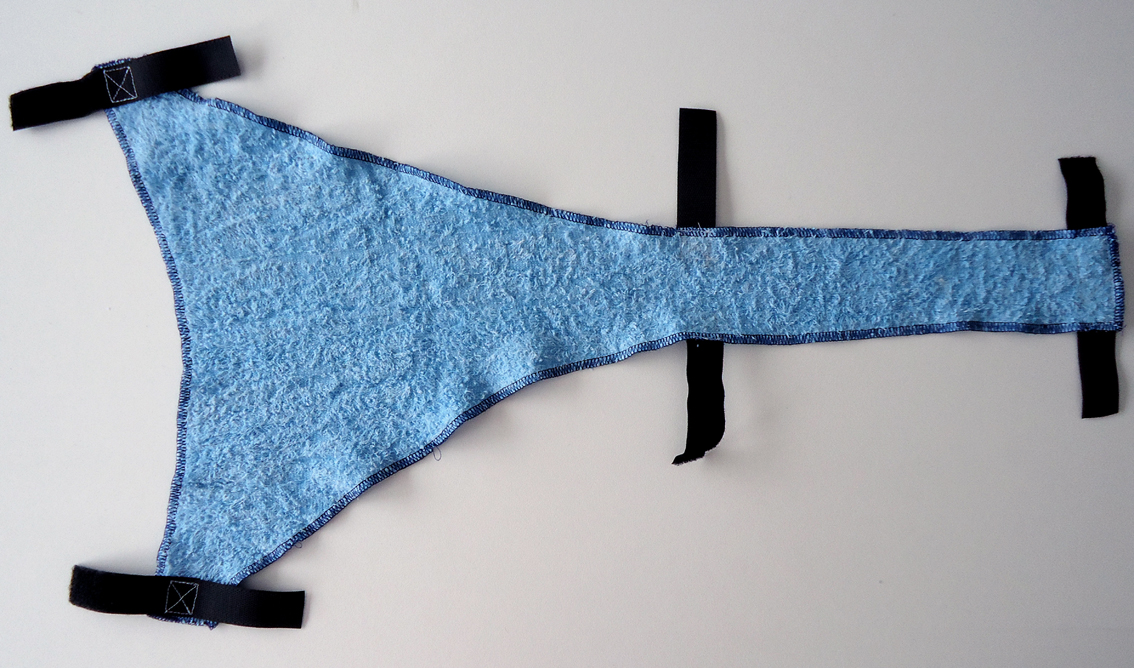 After a second fitting we added the velcro in the centre too, this brings the sides downward, creating a kind of hood effect and solved the problem of the edges slightly brushing past his legs. 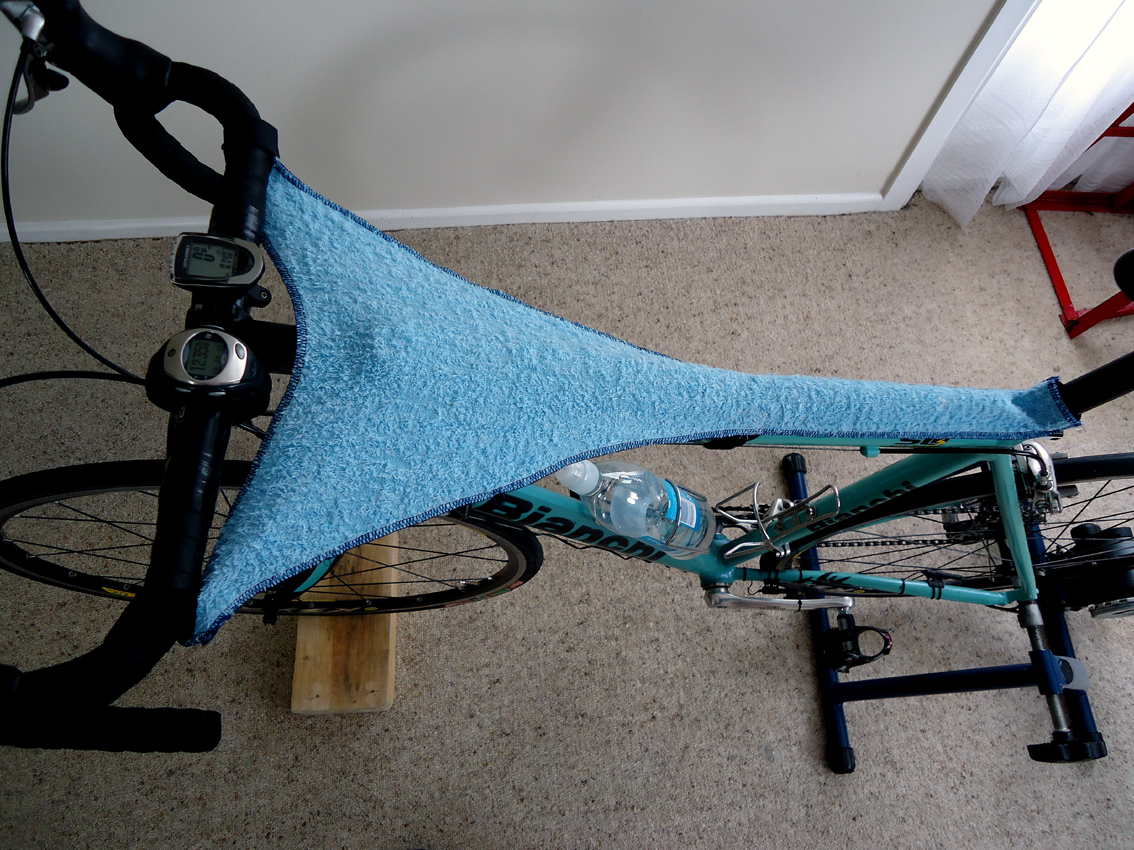 In the end the “first attempt” ended up being the only attempt. 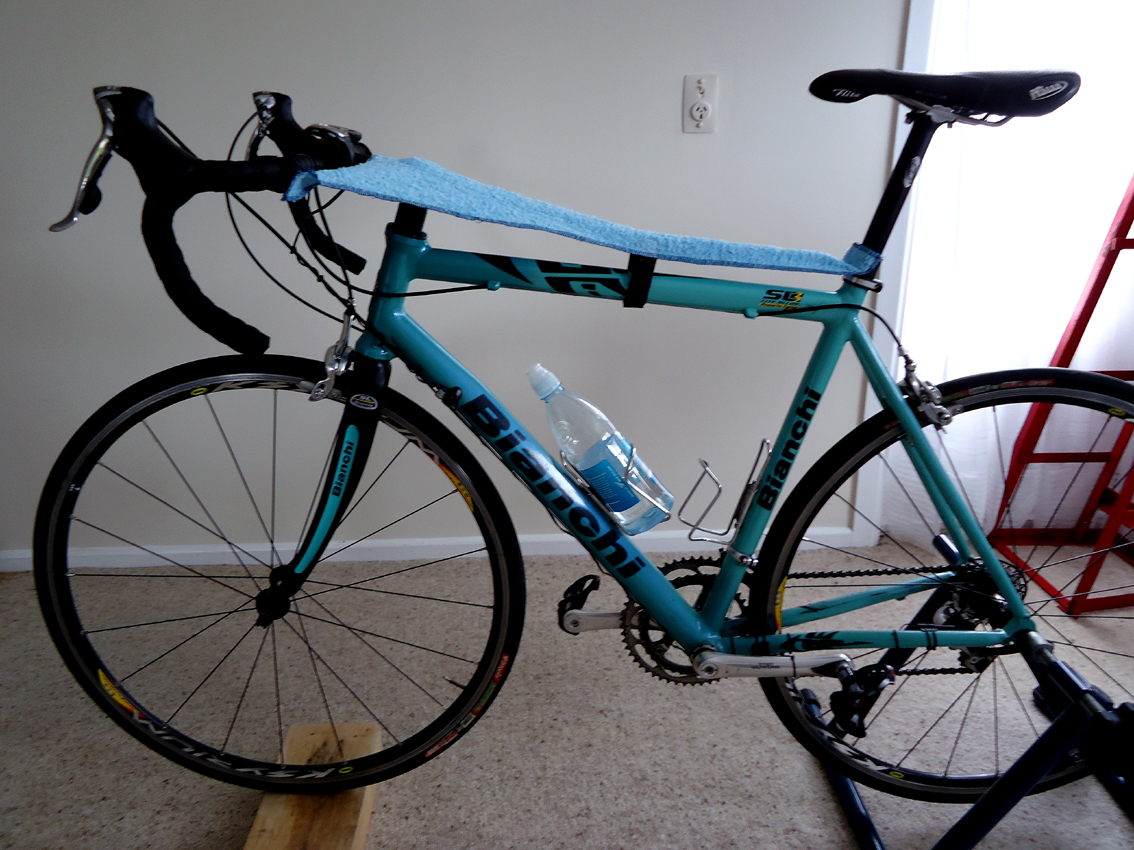 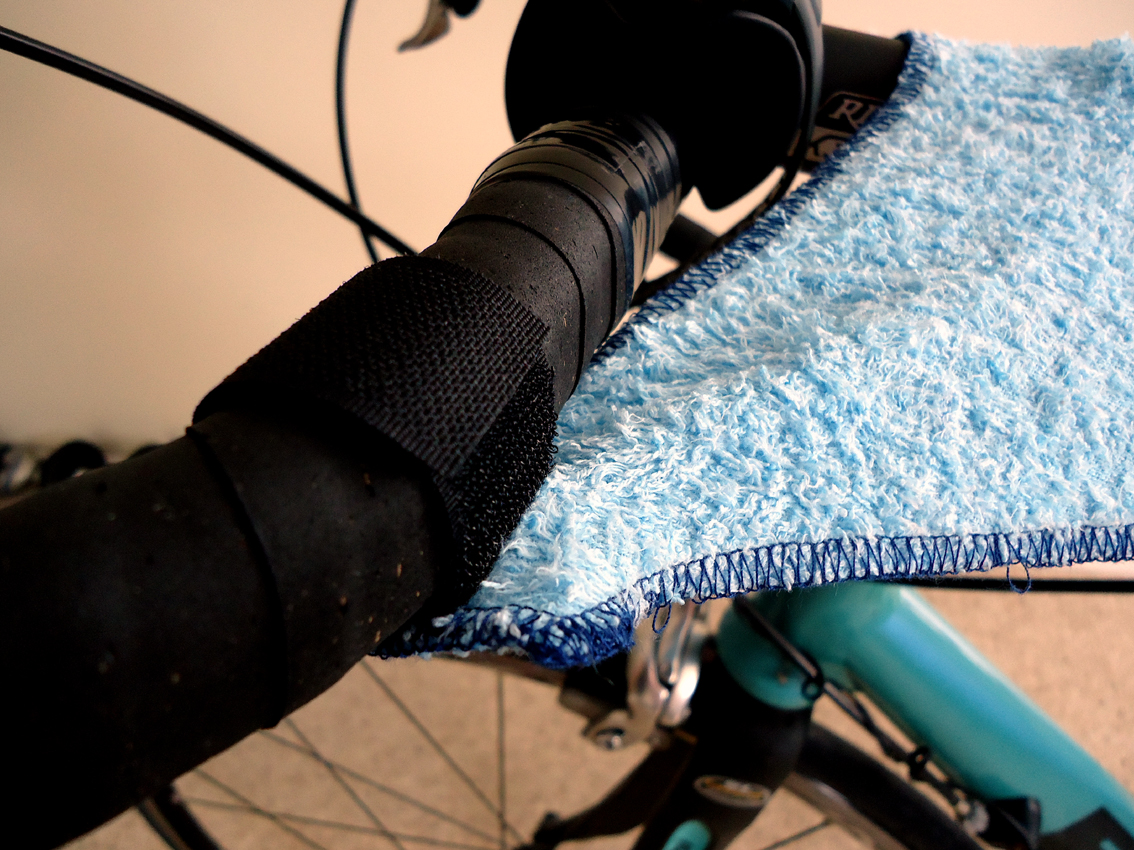 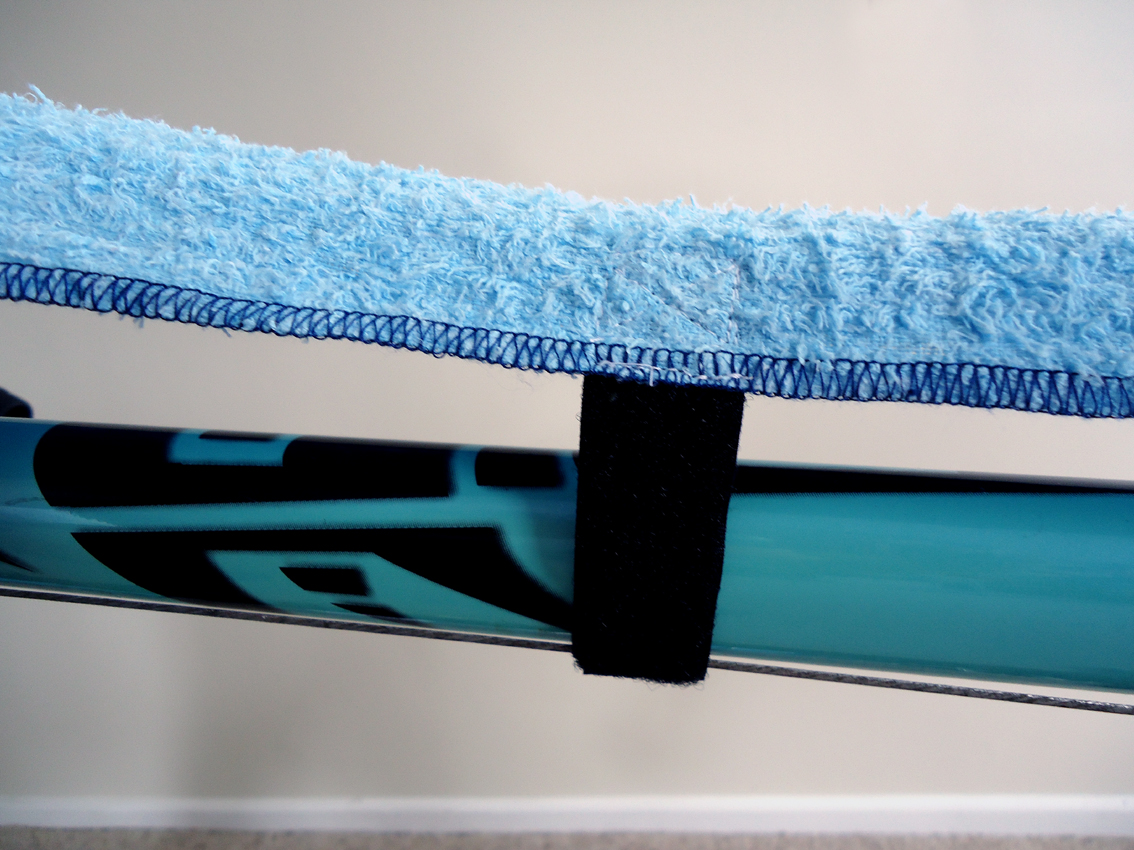 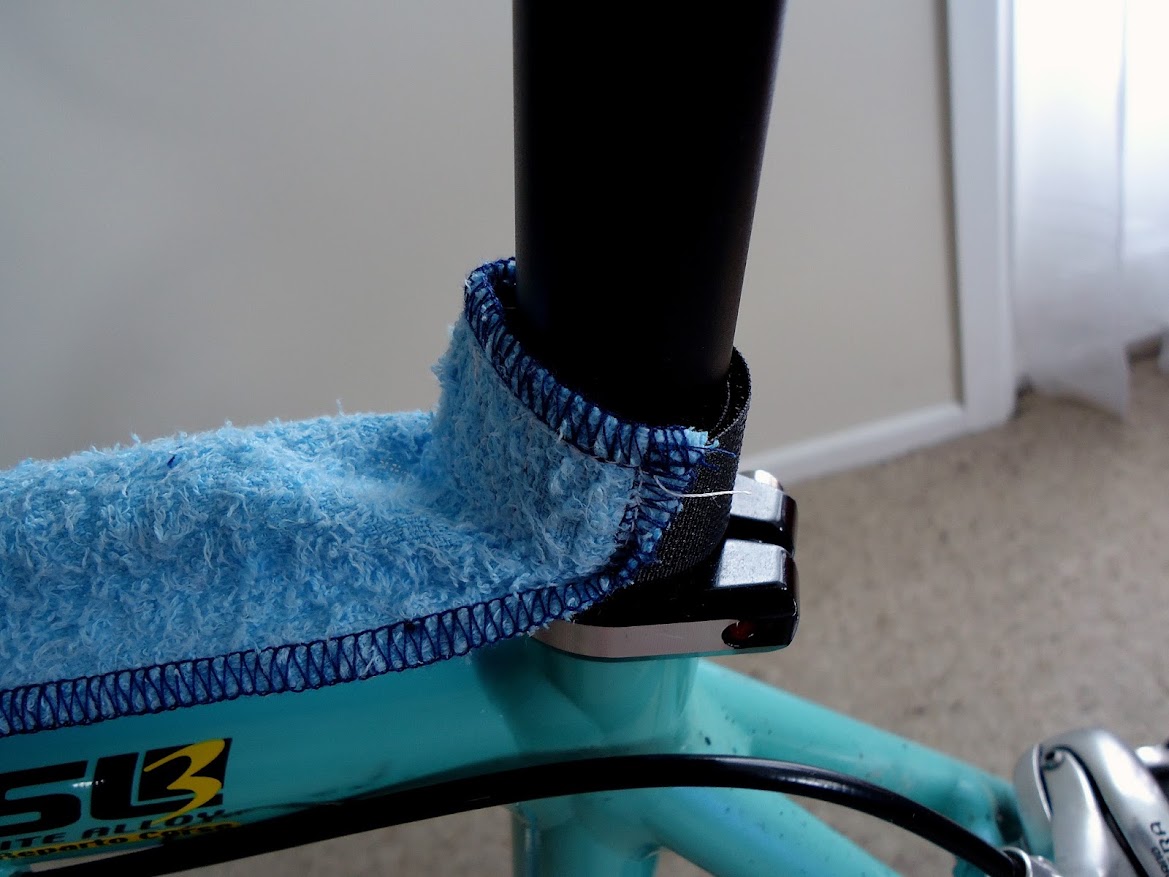 I try to make even the most simple (and weirdest) things neatly. This was supposed to be the trial run, I didn’t expect to get it right first time, and therefore I didn’t bother to change over any of the threads in my machines. I offered to make a second one but NH didn’t seem to mind a dark blue overlock stitch against a light blue towel and black velcro sewn on with white thread, he was too busy patting us both on the back for getting it right in one shot. The following morning he gave it a thorough testing it out and declared it a win…so there you go… 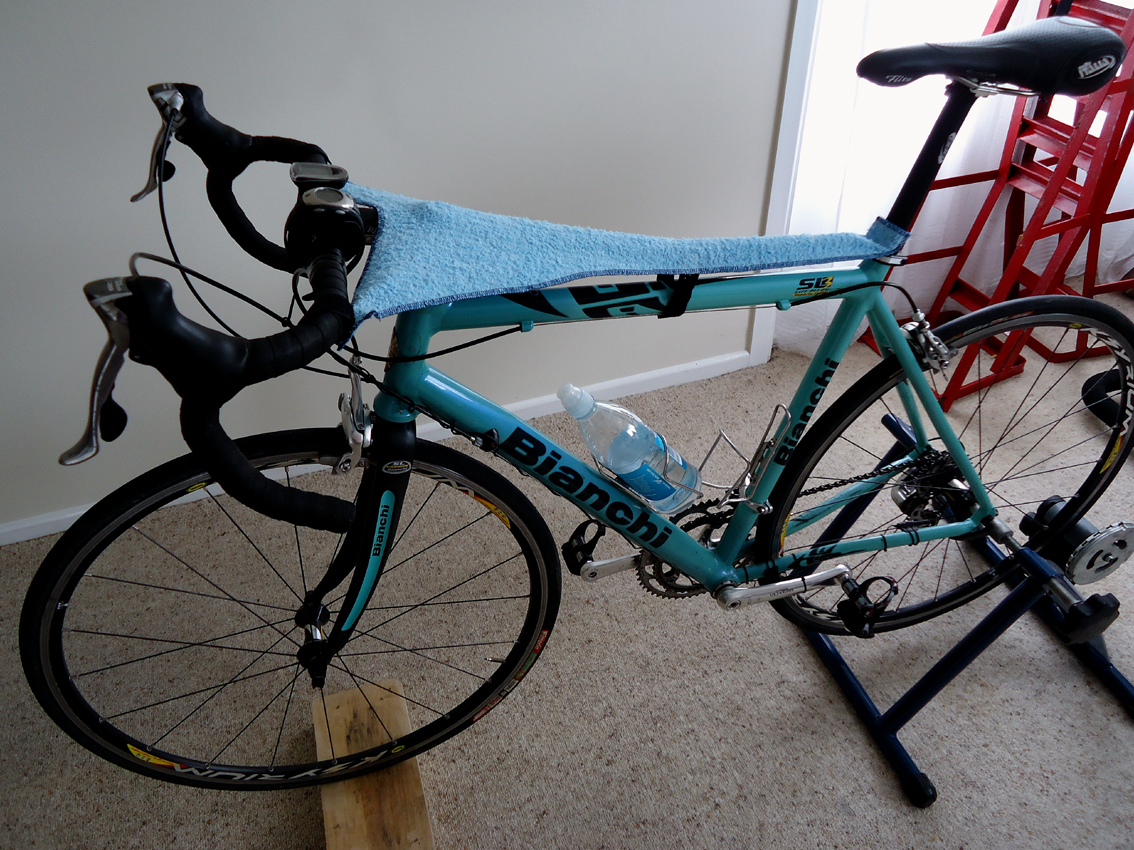 After it was all complete and it got the Bicycling Hubby’s seal of approval I decided to do some Internet research. What I found was surprisingly like what I had made, and provided some funny names. CycleOps call their version a Bike Thong (snigger) 😉 and Elite refer to theirs as a Sweat Net, most others are boringly named as “Sweat Guard”…Bike Thong is my favourite – it does indeed look like some sort of weird de-constructed panty!

*I shouldn’t tease, NH owns several bicycles, I know the correct names for each of them and what type of riding each is designed for, I even have one myself. It’s just much more fun to give them funny names for the blog 😉

23 thoughts on “The strange things I sew for my husband…”